We last covered Minneapolis rock legends Soul Asylum they played the Entry for a packed crowd of about 200 on a cold December night. Now they return with a new announced album (the title seems to be a secret) and an US tour with the Meat Puppets to play First Ave’s Mainroom.

As I mentioned in the Meat Puppets review, the atmosphere was super relaxed and the audience in a great mood. As the Soul Asylum set came closer the area to the left of the stage (where the cool kids and photographers hang out) turned into a who is who of the Minnesota rock scene. There were more VIP badges than at a Cher concert and the green room must have had a revolving door that night. 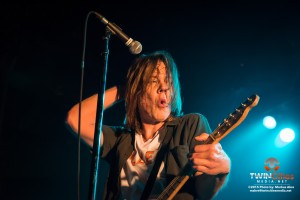 The set opened up with a beatboxer / rapper whose name I did not catch. During his piece he engaged in good natured banter with a truly impressively sized fellow in the front row (that’s truely impressive coming from a 6’1 240 lbs Austrian). The band took the stage to his beat and then took of like a rocket.

Opening number “Somebody to shove” came hard and fast at the audience and while the member of Soul Asylum may have outlive their teenage angst of the 90 their energy and stage presence is at the top of the game. Frontman Dave Pirner magnetism draws everybody’s eyes and he gives it every bit of energy he has. Bassist Winston Roye mixes stoicism with rocking out and lead guitarist Justin Sharbono balances him and Pirner nicely. Drummer Michael Bland remains visually in the background but musically prominent. The band is playful and comes together at center stage to rock out frequently.

Soul Asylum is an outstanding live band that should not be missed. Check their tour schedule here

Set List:
Somebody to shove
Shut down
Misery
Whatcha need
Black gold
Without a trace
The game
Can’t help it
Supersonic
No time for Waiting
Eyes of a child
Runaway train
Spinnin’
Gravity
Encore:
Made to be broken
April fool

There are some people in this world that were clearly meant to live in a different time, a different era. Pokey LaFarge is one of those people. He seems to be from a much simpler […]