It was “Senior Rockers show the young whippersnappers how it’s done” week in Minneapolis. First the Rolling Stones kicked the roof of TCF stadium – feel freee to look there’s no roof left – and on Friday the Meat Puppets took over First Ave co-headlining with Soul Asylum to kick off a 29 stop US tour.
Originally founded in 1980 the band went through a couple of breakups and hiatuses but stayed together in it’s current lineup since 2006. Their most recent album “Rat Farm” was released in 2013.
Current members
Curt Kirkwood – lead vocals, guitar
Cris Kirkwood – bass guitar, backing vocals
Shandon Sahm – drums
Elmo Kirkwood – guitar (touring) 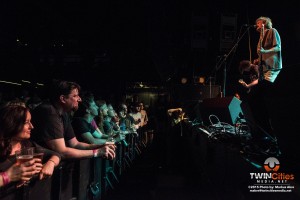 One thing that stood out was the audience. Spanning a couple of generations but but towards the older side for First Ave, this was the most relaxed and chill group I have seen in a long time. People were there to watch the show and have a great time. They had nothing to prove to anyone and no chip on their shoulder. There was an awesome assembly of vintage band t-shirts (including a REV105 shirt that I wanted to steal). Even the guy in shorts and orange crocs had some pretty good dance moves.
The Meat Puppets delivered a 75 minute set with long jams, great sound and good lights. They relied on steady light with some side LEDs thrown in towards the end of their sets. There was not a whole lot of interaction with the audience between songs. Band and fans were comfortable with one another and their show was clearly about the music, and rightfully so.

In the middle of a busy weekend of shows for me, Pop Evil was the second of three and night two at the MN Music Hall.  The ‘Music Over Words Tour’ has just recently gotten […]

After getting this weekend completely off from live music due to a bit of a hiccup in a previous engagement, I honestly thought about trying to go the entire weekend without a live show and […]

Uptown’s newest addition to the music scene is the Granada Theater.  March 3 will kick off their arrival in a big way with 70s Prog specialists Nektar.  Tickets and details can be found HERE. It’s […]