Canadian synth-rock band Metric overtook the Fillmore in downtown Minneapolis on Monday night for one of the most visually dazzling stage shows I have seen in 2022. While the band is no stranger to gracing the Twin Cities, coming here fairly frequently, fans still turned out for this show in the masses. Although it was not officially deemed “sold out” at the door, it was maybe 10 people away from being so. There was hardly any room to move in crowded venue. Fans were packed in the Fillmore like sardines. Many left standing on their tip toes trying to get a good glimpse of the stage.

Metric’s show landed in the home stretch of the Doomscroller tour — celebrating their new album Formentera that was released in July. Admittedly, Metric is a band I was not very familiar with going in to the show, so I was looking forward to checking them out. Many of my friends had strongly endorsed their live performance, so I was encouraged, feeling that I was in for a good time knowing the music or not.

After finding a spot where I had somewhat of a sightline, I waited 30 minutes for the bands to changeover. Metric came out to the sound of roaring applause, and opened the night with their new song “Doomscoller”.  As the lights were dreamily dimmed down showing just the silhouettes of the band members, the beat shook the Fillmore like a pulsing heartbeat. A mix of electronic pop and synth-rock encapsulated the room. Lead vocalist Emily Haines danced around the stage like a swift fox, smiling and jingling her tambourine.

I felt like I had been transported to one of Berlin’s finest nightclubs. The stage was overtaken by shimmering lights, flashing all across the screen in white and rainbow colors — mimicking the wall of a flashy 90’s roller rink. Strong, eye-catching strobe lights flickered on and off and the stage light up in blue, red, and white.

Metric played a mix of new songs and familiar crowd favorites. The whole band sounded excellent and incredibly tight the entire night. Guitarist James Shaw whipped out some excellent solos, all while wearing a swanky bowler hat. I really enjoyed their stage presence and was mesmerized by their performances. Having walked in a Metric “newbie”, I walked out feeling like I had seen one of the most visually pleasing shows I’ve been to in awhile. I can fully understand why fans keep showing up for them again and again. 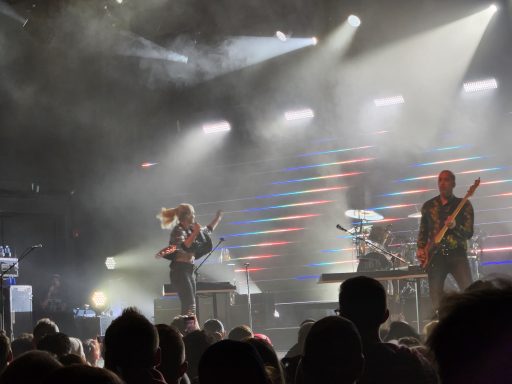 How Do You Not Love The Regrettes?

The Regrettes brought their How Do You Love? Tour to St. Paul’s Amsterdam Bar & Hall Saturday night and their rousing performance left all wondering, how do you not love this young punk band. Even […]

Photos by David Rubene   Rhymesayers Entertainment orchestrated a 20th Anniversary Show that will go down in history as Minneapolis’ largest hip-hop event ever. Fans traveled from miles around (some as far reaching as Ohio) […]

St. Vincent Hardly Down And Out Downtown Tuesday Night At The Armory