With “Dance Macabre” becoming the band’s third #1 single at Rock Radio, GRAMMY Award-winning artist Ghost is in the midst of a six-week North American headline tour that sees the Swedish rock band’s elaborate rock theatre presentation metamorphose into a full-on arena production. Billed as the “Ultimate Tour Named Death” and produced by Live Nation, the tour kicked off September 13 in Bakersfield, CA, and continues through October 26 in Glen Falls, NY.  Recently, Ghost completed their Special Guest summer slot on Metallica’s 25-date “Worldwide” European Stadium Tour.  Their stop in Minneapolis on October 5 is part of the 93X Haunting Starring Ghost. San Antonio’s three-time Grammy-nominated alt/rock band Nothing More, who earned three Top 10 singles from their most recent album, The Stories We Tell Ourselves, is the opening act. Doors open at 6pm with music beginning at 7:30pm. Be sure to arrive early to get though typically long entrance lines at the Armory and please see the important notice below regarding costumes. Limited tickets are still available HERE.

While costumes are encouraged for this event, please note all patrons must be identified at the entrance. If you are coming to the event in costume, please be prepared to remove any masks; if you plan to paint your face, please make sure you can be identified by security. If you cannot be identified, you may be asked to remove your makeup and you may not be able to purchase alcohol if you are over 21. If any part of your costume includes a prohibited item, you will be required to remove it prior to entering the venue. Prohibited items include: toy guns or handcuffs, dust or gas masks, large chains & spiked jewelry. If your costume blocks or impedes the view of another patron, you may be asked to relocate or remove the item for the performance.

Ghost’s widely acclaimed live performances are known for raising an ungodly ruckus, and that will only be amplified as the band brings its stage production to arenas. Cardinal Copia and the seven Nameless Ghouls will perform for more than two hours on a striking stage set resembling a medieval cathedral with a backdrop of illuminated stained-glass windows that pay tribute to the three now-departed Papas. In addition to rich costumes, special effects, and a spectacular light show tailored-made for arenas, the Cardinal and the band will take advantage of a series of multi-level platforms and walkways to prowl around on while performing some of Ghost’s fan-favorite songs from the band’s albums and EPs catalogues. The set list will include favorites “Square Hammer,” “Cirice,” “Ashes,” “He Is,” “Year Zero,” “Rats,” “Mummy Dust,” “Life Eternal,” “Dance Macabre,” and many more.

The Swedish-born Tobias Forge, who has been referred to as “the Andrew Lloyd Webber of rock,” is Ghost’s creative force, singer, songwriter, musician, and architect of the elaborate storylines that are woven through the band’s four full-length studio albums, EPs, music videos, webisodes, and live shows, all of which advance the Ghost storyline. Forge grew up listening to a wide array of 70s and 80s rock – Alice Cooper, Journey, Kansas, Boston, Black Sabbath, Jefferson Starship, Iron Maiden, and Foreigner. He’s a hardcore music junkie; at home in Sweden, has a most impressive collection of vinyl, cassettes, CDs, and VHS tapes, and when on tour, he regularly arranges for visits to local record haunts and ships back even more treasures. He plays guitar, bass, drums, keyboards, and kazoo. Ghost’s new album, Prequelle, is loosely based on The Black Plague of 14th century Europe, a metaphor Forge hopes will apply to the societal ills of today.

Ghost’s music began as being much heavier, harder and “more metal,” but over the band’s recent history, their songs have evolved to embrace a catchier, rock/pop sound. Five of the band’s songs have hit Billboard’s Top 5 Rock chart – “Cirice” claimed the #4 spot in 2015, “From The Pinnacle to The Pit” went to #5 in 2016, and “Square Hammer” (2017), “Rats” (2018), and “Dance Macabre” (2018) all held the #1 spot on the Billboard Mainstream Rock Songs chart and on the Mediabase Active Rock chart. “Faith,” the band’s current single, is the third consecutive Top 10 single on the Rock Charts from Prequelle. Ghost’s music retains its rock edge as well as its dark lyrical themes like The Black Plague, the Antichrist, the Inquisition, avarice, and the Apocalypse. Ghost has received three GRAMMY nominations: “Best Metal Performance” in 2016 for “Cirice,” which they won, and “Best Rock Album” for Prequelle and “Best Rock Song” for “Rats” in 2019.

To celebrate its 50th anniversary, Ghost’s “Seven Inches of Satanic Panic: ‘Kiss The Go Goat’ and ‘Mary on A Cross’” will be re-released by Loma Vista on September 27 and can be preordered via Ghost’s website and from all digital platforms. Back during the summer of 1969, an up-and-coming band called Ghost, fronted by Papa Nihil, played its first date at The Whiskey A Go-Go on Hollywood’s Sunset Strip. The show was to celebrate Ghost’s first release on Galaxy Recordings, “Seven Inches of Satanic Panic,” the double-A-side 7-inch single featuring “Kiss The Go Goat” and “Mary on A Cross.” This original Ghost line-up eventually disbanded and the single, its original tapes, and the band’s only promo and live performance of “Kiss The Go Goat” ever filmed, were lost…that is until recently when the songs and the Super 8 footage were discovered and resurrected by Papa Nihil. Check out Ghost’s Webisode Chapter 8: “Kiss The Go Goat”, below, for the whole story.

Alt rock band and three-time Grammy nominees Nothing More are serving as the main support for Ghost on the “Ultimate Tour Named Death.” The just released an amazing video for their song “Fade In/Fade Out.” Consisting of Jonny Hawkins on vocals, Daniel Oliver on bass, Mark Vollelunga on guitar, and Ben Anderson on drums, Nothing More has worked relentlessly throughout their career to make a name for themselves in the rock world. The band signed to Better Noise Records, a label under Eleven Seven Label Group, and released their self-titled album in 2014 with debut single, “This Is The Time (Ballast)” hitting #1 on the Active Rock Chart in the US with 2 more top 10 singles “Jenny” at #3 and “Here’s To The Heartache” at #4. Following the release, the band toured heavily throughout the world with acts including Volbeat, Killswitch Engage, Five Finger Death Punch, Halestorm, and Shinedown. Their most recent album, The Stories We Tell Ourselves (2017) landed them with 3 GRAMMY nominations in 2018 and dominated the rock category with the most nominations for Best Rock Album, while #1 single “Go To War” was nominated for Best Rock Song and Best Rock Performance of that year. The band had an incredible year in 2018, continuing to tour the world with household names such as Breaking Benjamin, and Bullet For My Valentine and Papa Roach. In 2019, the band kicked off their year with the ɥʇnɹʇ headlining tour in the US with Of Mice & Men, Badflower, & Palisades in support. This spring Nothing More went to the UK with Papa Roach followed by more headline dates in Europe. Now they are on their Fade In/Fade Out Tour as support for Ghost. 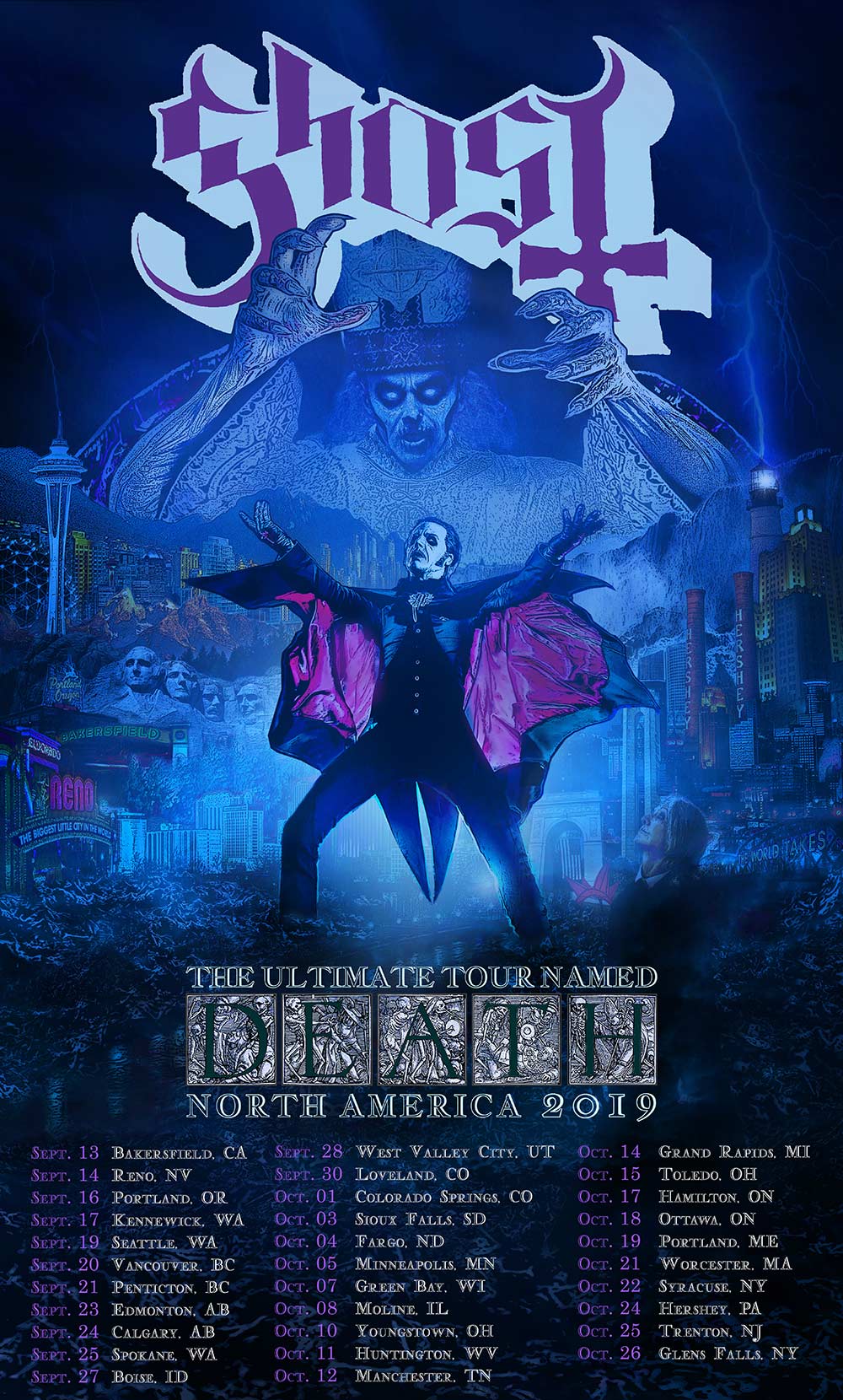 Jenny Lewis is NAF (look it up) at the State Theatre

To celebrate the 10-year anniversary of her debut solo album “Rabbit Fur Coat” Jenny Lewis and the Watson Twins are on a brief tour that started last night in Minneapolis. The day before the show […]

With rain in the forecast for Thursday, the X Games updated their schedule for the one event that had been scheduled outdoors. The Vert Skateboard qualification rounds were moved from Thursday afternoon to Wednesday. The […]