Swedish occult metal sextet Ghost and their fans refer to the band’s live performances as ‘rituals’ and as I observed the line waiting to get into The Myth on Thursday night. Outside, there were ranging degrees of fandom on display, from average concert-goers in their Megadeth/Metallica/Slayer concert tee-shirts, to people that were clearly on the intense side, including a several Nameless Ghoul lookalikes. Point being, Ghost is a band you can enjoy on a number of levels, be it a full-fledged practicing Satanist or just somebody, like me, who enjoys a tight rockin’ band with a predilection for classic guitar tones and a penchant for great tunes with big hooks. 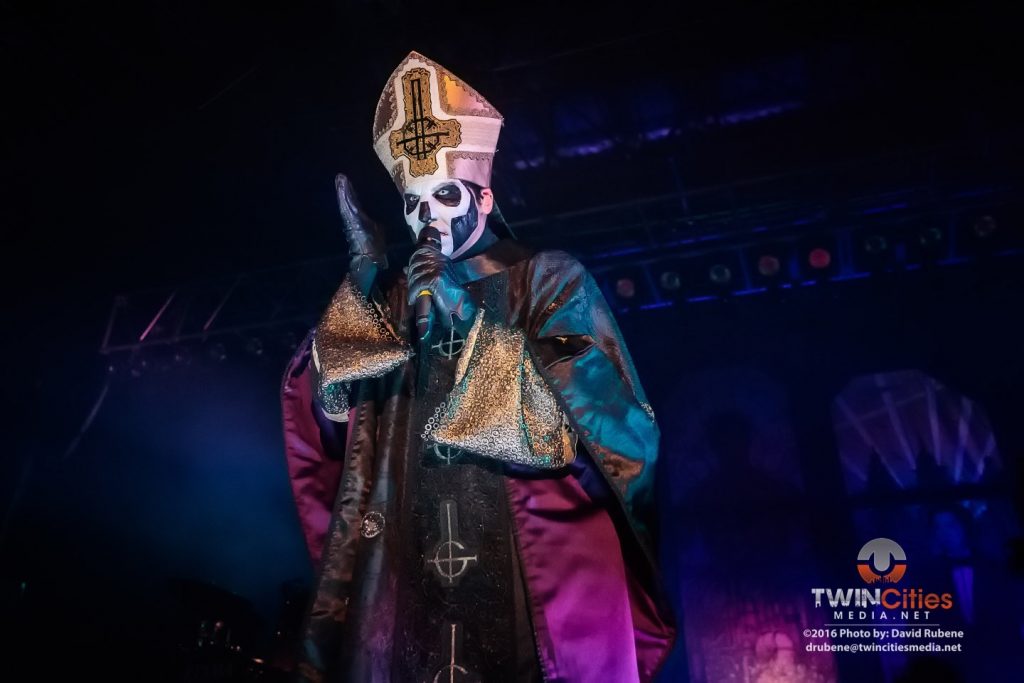 With the crowd packed in tightly and the energy starting the to rise, the house lights dimmed. A roar erupted from the sizeable crowd that quickly grew to cataclysmic proportions as Ghost took the stage with full theatrical impact. Lead vocalist Papa Emeritus III sported his mirror universe papal vestments: a richly embroidered purple-lined black satin gown, a mitre emblazoned with the Ghost upside-down cross monogram, and a fiendish skeletal facemask. The Nameless Ghouls (though each is identified by a specific alchemical symbol) were clad in near-identical black cardinal outfits and dapper white spats with full-face silver devil masks complete with horns but lacking mouths. The effect is very unsettling as it looks like the Ghouls’ mouths were blurred out by some intentional Photoshop technique. 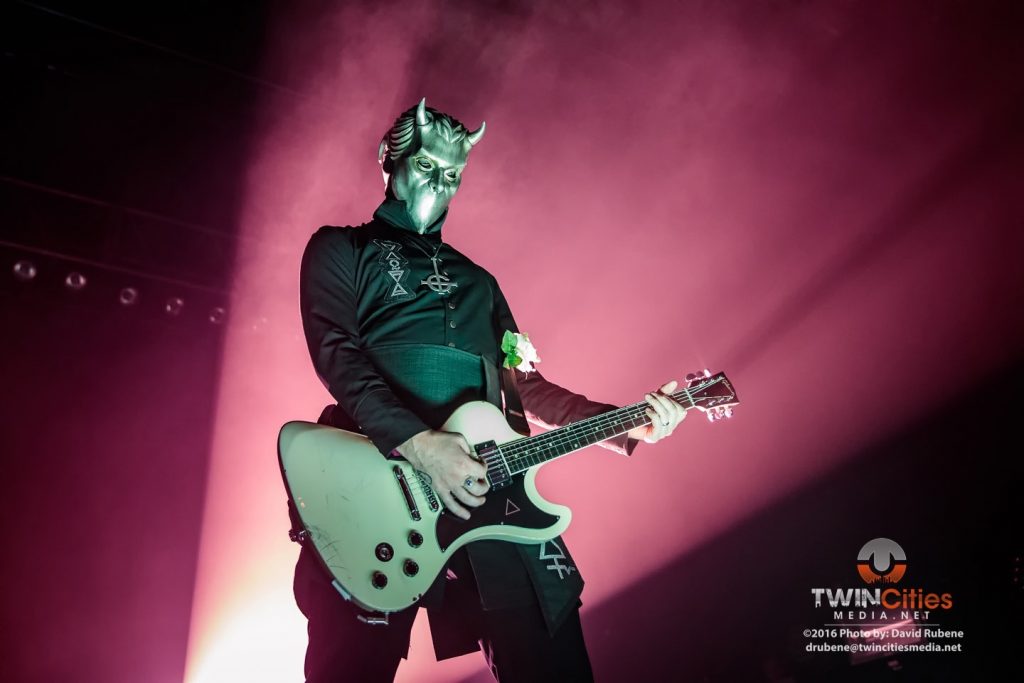 Throughout the show, both Ghouls and Papa were in near-constant motion back and forth across the stage, engaging with the audience and each other. Early on in the show, the two Ghouls together downstage in an inward-facing circle, and bathed in saturated light from the exceptionally well-designed LED lightshow, the three resembled nothing less than a trio of demons that were attempting to conjured up some sort of fiendish delight. Looming behind the band was a towering backlit backdrop of faux stained glass with appropriate imagery rendered in Art Deco style, echoing the Metropolis-inspired theme of the band’s latest offering, Meliora. 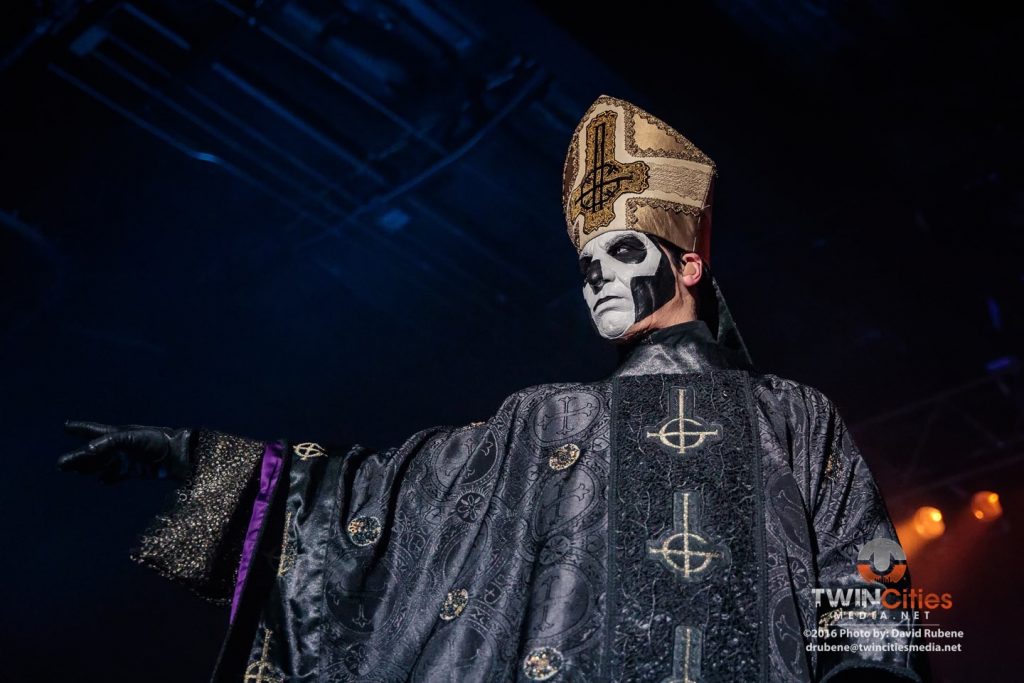 The show’s setlist drew heavily from Meliora, kicking off with the one-two punch of album openers Spirit and From The Pinnacle To The Pit, the latter featuring a menacing distorted bassline that shook The Myth from foundation to rafters. Ritual, from Ghost’s debut Opus Eponymous, followed. Just as there are no doubt athiests who enjoy gospel music, so, too, can Ghost’s hymns to the unholy be savored without need for a blood offering to any cloven-hoofed manbeasts. Later in the set, Mummy Dust, already a scorcher on Meliora, took on a new urgency and thunderous power in a live setting, and it was in the midst of this blitzkrieg that Ghost unleashed their most malevolent sulfur-shrouded blasphemy. 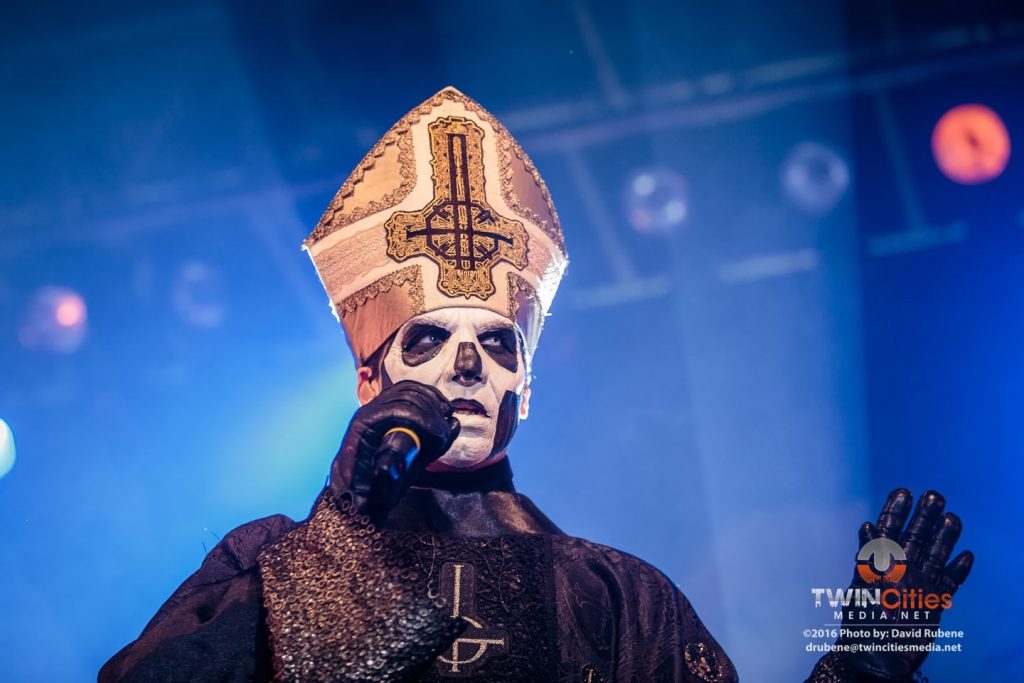 As the show drew to a close, Papa took a few moments to give a shout-out to Minnesota for its contributions to heavy metal. After, Ghost launched into their now-classic cover of Roky Erickson’s If You Have Ghosts, inspiring a rapturous sing-along from the audience. A brief exit from the stage and the band returned with an encore of Monstance Clock off Infestissumam. The song concludes with a repeated refrain of “Come together, together as a one/Come together for Lucifer’s son…” which again spurred the crowd to lift their voices like the worshipful congregation they were. 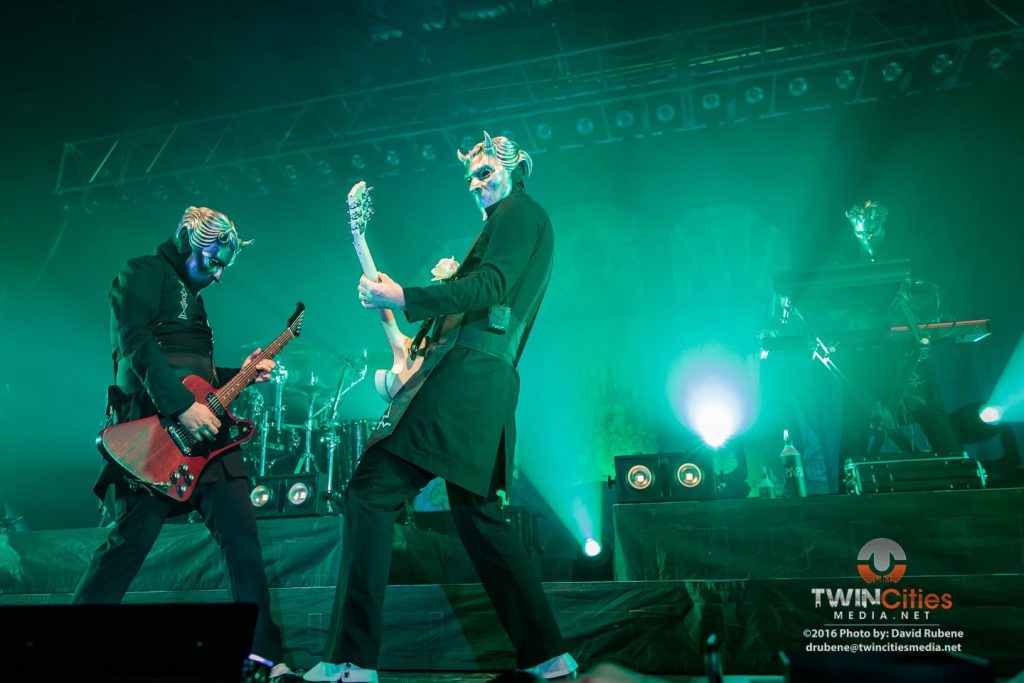 In the end, the faithful headed out 100% fulfilled knowing the ‘ritual’ concluded with great success.

Time Bomb Tour Ends With A Huge Bang In Minneapolis

Photos by David Rubene   Prince is God in Minnesota but hip-hop is a very close second! – Metasota I couldn’t agree more. The local hip-hop community came out by the masses last night in […]

Tuesday night at Minneapolis’’ Fine Line was one that I had been looking forward to since the show was announced. Swedish songstress Leon has been on my heavy rotation for months. I first fell in […]

Welshley Arms Rocks With Friends At The Entry

That the Entry was sold out for Welshley Arms’ show isn’t surprising. Maybe that it sold out almost as fast as it was posted on the First Avenue calendar. And once I arrived whether that quick […]