Resurrection Fighting Alliance, which is one of the premier MMA promotional companies in the United States and the top feeder league for the UFC, returns to Mystic Lake on November 6th with its elite-level MMA action. It’s RFA’s third appearance at Mystic Lake, this time presenting RFA 32. 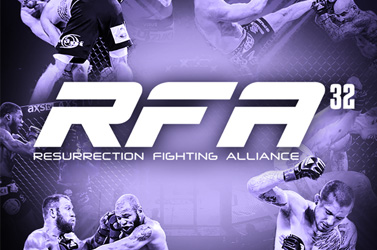 RFA 32 will bring some of the top fighters in the world to the Mystic Lake Showroom. The event also features several of the top prospects from the state of Minnesota. RFA 32 will feature Minnesota’s own Melvin ‘Career Killer’ Blumer who will take on Leandro ‘Pitbull’ Higo. Melvin Blumer is Minnesota’s top-ranked 135-pounder, and he’s coming off a devastating knockout victory over UFC veteran Jeff Curran. That win came during RFA’s last appearance at Mystic Lake in March.

The card also is scheduled to host the Minnesota debut of former Gophers wrestler Logan Storley, who made a successful MMA debut in August. Storley was a four-time All-American for the Gophers. Minnesota’s top prospect, Chad Curry, also will be in action. Curry, who trains at the Mario Roberto Jiu-Jitsu Academy in Rochester, is a perfect 7-0 as a professional. Other ranked Minnesota prospects scheduled to be in action include Ben Neumann, Sean Richman, Karter Holthusen, Ben Locken, Dan Moret, Reese Hernandez. The night also will feature women’s MMA, including Minnesota’s top female prospect Linsey Williams.

This is an event that you should not miss! Tickets are still available but are going fast.

Dark Waves opened for Brook Fraser at the Triple Rock.  Front man Nick Long and his band quickly let the audience forget that the outside temperature was balmy 3 degrees. Based in Southern California they […]

Twin Cities Media has expanded our reach and is now on YouTube!! You can expect to see some really cool interviews and media event highlights in the very near future. We caught up with The […]