Sunday night’s performance of “See Jane Sing!” at Orchestra Hall was a rambling, old school celebration of jazz, cabaret and witty banter. The Tony Guerrero Quintet kicked off the night with a lively jazz set that jumped nimbly from West Side Story tunes to “La Vie En Rose” to the theme from ABC’s Celebrity Bowling. Said Guerrero, “[Jane] asked us to come out and fill in a little bit, so she could finish throwing up backstage.”

Glee music producer and arranger extraordinaire Tim Davis was next to stir the crowd, leading a buttery version of “Come Fly with Me”, as well as a liquid “The Very Thought of You”. Davis and Guerrero also treated the audience to their rejected-by-NBC U.S. Open original  “Take Another Swing at Love”, described by Davis as a “Frank Sinatra song about tennis”.

After Davis and Guerrero warmed up Orchestra Hall, Glee’s Jane Lynch took the stage clad in a smart pantsuit and glittering heels.

“You should be so proud of your city for this wonderful work of art,” said Lynch of Orchestra Hall, praising its sound quality and the niceness of its staff (as well as the niceness of Minnesotans). Lynch launched into Broadway ballad parody “If Wishes Were Rainbows”, with sample line, “the priest said if you touch yourself, the angels will go blind”. Despite the silliness of the lyrics, Lynch displayed a mature and brassy, yet pure sound. It was the polished Broadway vocal performance of a woman who owned the role of Miss Hannigan on the Great White Way in 2013.

After her glittering faux-Broadway entry to the stage, Lynch switched to jazz-parody mode with “Slappin’ the Cakes”. Despite the retro vibe of the night, the song was true to Lynch’s out-and-proud sexuality: “Slappin’ the Cakes” had Lynch enticed by an alluring woman.

“Mr. Monotony”, a purring number with the Office’s impish Kate Flannery (ostensibly in town for the “Mary Tyler Moore lookalike contest”), kept Lynch mostly in her brassy alto range, but occasionally she pumped out a fluttery soprano note. It was an athletic vocal performance that set the tone for the night. Their harmonies were matched in vocally and thematically, with the duo often deliberately delivering flat harmonies on “Monotony” to underscore the song’s theme.

From there Lynch and Flannery switched gears to highlight the work of Lynch’s former collaborators Christopher Guest, Michael McKean and Harry Shearer, who penned “The Skeletons of Quinto”. Lynch sang the ballad from the fiery perspective of a Spanish farmer – complete with a lisped spoken interlude. It was during this number Lynch embraced a diva bandleader role, barking out “solos!” before the instrumental break and “end it” after facetiously flubbing her final note. 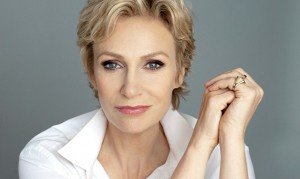 By this time, Davis had once again joined the stage as Lynch’s other foil along with Flannery. The three sang an expertly harmonized “Blood on the Coals”, a folk parody about a train wreck in a coalmine. Comedy aside, the trio displayed tight vocals and urgent harmonies.

The trio proceeded to deliver a triumphant medley of torch songs mixed with witty banter (Flannery: “you can lead a horticulture, but you can’t make me think), culminating in a subversive reimagining of Sir Mix-a-Lot’s “Baby Got Back” that mischievously fit into the jazzy cabaret theme.

Lynch, her wily sidekicks and the backing band ended the night with a medley of songs that made them cry as children. Lynch’s entry was “Puff the Magic Dragon”, but the mix also included obscure cuts like Wayne Newton’s “Daddy Don’t You Walk So Fast” and Terry Jacks’ “Seasons in the Sun”.

Lynch and company closed the set the way they closed every performance of the “Real Live Brady Bunch” in the 90s, in which Lynch played Carol Brady. Lynch and Flannery led the band through a spirited “Go Ask Alice”, a spin on Jefferson Airplane’s “White Rabbit” that changed the trippy lyrics to fit “Brady Bunch” housekeeper Alice’s domestic lifestyle. It was a perfectly comical and idiosyncratic way to tie up an elegant, yet edgy, night of cabaret performance from the small screen’s first lady of snark.

There’s been a ton of great music being released this year and Tiger Army is one such release that is also making a stop in Minneapolis!  They will be playing at The Varsity Theater on […]

Another night with another snowstorm looming in our future, the people at last night’s show were clearly trying to get one more party in before we all hunker down for what’s sounding like nearly a […]