Here’s my new life goal: When I turn 58, I want to be half as cool as Peter Murphy. The former Bauhaus singer, considered one of the founding fathers of Goth, played Mill City Nights yesterday as part of his “Peter Murphy Stripped” tour. This was a (mostly) seated show and the audience covered a range of age and appearances from the mandatory black to more formal and some casual fashion.

Starting off the evening was DJ Jake Rudh, who I predict will be as cool a cat as Peter Murphy when pushing 60. Rudh has a knack for picking just the right songs for each audience and re-introducing them to artists they had forgotten. His Transmission dance nights at several venues around town are staples of the MN club scene for people who enjoy dancing and cool music rather than air horns and noisy DJs. He is accumulating quite the impressive list of artists who  have asked him to warm up the crowd for them.

The last few minutes before Murphy took the stage Mill City Nights was filled with ambient music setting the mood. The set started on time with “Cascade” and from the first few seconds it was clear that the audience was in for a treat. Murphy has been performing for close to 40 years and the size of the set list reflected his large body of work. I have seen my share of aging rock stars that try to give their fans the experience they had of them in their prime. That is not what Peter Murphy did. He embraces that fact that both he and his fans have matured a bit.
I loved his voice. It was always great but has developed such character. He can still hold a note with the best of them and proved it several times. This is a rock star who is secure with who he has become. The stripped down versions of his songs are supported by 2 musicians playing several instruments each throughout the set. It was interesting to observe a violin taking on many of the parts played by synthesizers. One track required a bit more strings and was supported by a backing track. 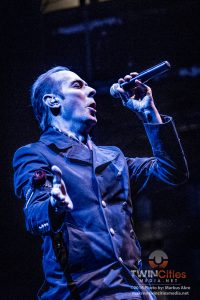 The audience was quiet during songs their attention glued to the stage with many mouthing lyrics along silently. The cheers and yelps after each song did prove that they were having a great time. I walked into the show expecting a few cool moments and was witness to one of the best shows I have seen so far this year. A very impressive performance and a great evening.

On Thursday, January 3rd, Seaberg was at the Turf Club celebrating the release of a new CD.  But the night was billed as a celebration of hip hop, punk music and black & brown art.  […]

Miss May I Brings Power To Cabooze

It has been a bit since I have been to a metal show. As much as I have loved every single show I’ve been to lately, it felt nice to go back to my roots. […]

Django Django an UK 4 piece art rock band just released their 2nd Album “Born under Saturn” in May. They are currently on tour supporting it. I first noticed them when heir single “First Light” […]