To call Kraftwerk pioneers of electronic music is somewhat of an understatement. They are Lewis & Clark with strong doses of Christopher Columbus, George Washington, and Thomas Edison. Founded in 1970 in Germany (hence the D KR 70 license plate on the VW Bug shown during Autobahn) the quartet has not just innovated electronic music but created instruments and sound that still influence musicians decades later. Vocoders, Synthesizers and the first electronic drum kit are just a few samples. Their tours are rare, this being only the 2nd time they have played Minneapolis in the past couple of decades. 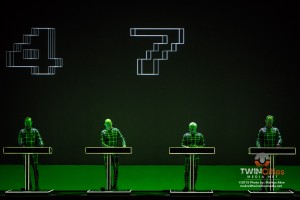 Their tour is billed as Kraftwerk 3D and sure enough concert goers were handed a set of 3D glasses (in a very cool Kraftwerk sleeve). Hilarity ensued as us photographers tried to figure out how to capture 3D projections – the best working theory so far involves 2 synched cameras, a pair of goggles ripped apart and lots of luck.

The show started promptly – they did allow 5 minutes for unpunctual Minnesotans. The first 3 songs blended into one continuous piece to draw in the audience and set the mood for the evening. It was a showcase of a number of simple things coming together to create something complex and very cool. 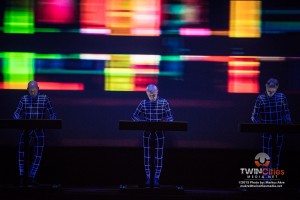 Some observations:
Despite being electronic music, the mood was far from cold. The sound was warm and the audience was basking in it.
The show had a very chill feel to it, the audience remained mostly seated but lively. In any other venue there would have been a few whiffs of a certain (still illegal) substance.
Songs were recognized by the audience in 2 stages. The hardcore fans clapped at the first bar, joined a few seconds later by the rest of the crowd.
Looking at the audience glued to their seats with 3D glasses at a live concert was a bit surreal at times.
Despite great visuals only a few phones were out taking pictures or video – folks were there for the music, not the selfies.
The live mix of their songs seems a bit harder with more prominent beats.
The projections for space lab had 2 highlights that got big audience reaction. First a flying saucer appeared to come out of the 3D screen (gratuitous, yet effective) and then a series of maps brought us closer and closer to the Northrop and finished with footage of the UFO landing in front of the venue.
For “Das Modell” the footage switched from 3D to classic black and white film.
“Neonlicht” has images of old German neon signs – here’s to you Klosterfrau Melissengeist!
The footage for “Autobahn” included a driving lesson for Minnesotans. If you are driving a VW Bug on the freeway in the left lane, and a big Mercedes comes up behind you – MOVE TO THE RIGHT!
For the first of 2 encores the band was replaced by animated figures – which song? “Die Roboter” of course!

Overall, this was one of my favorite shows of all time. Judging by the smiles on people’s faces as they left the show, I was not the only one feeling that way.

There’s a special magic about sold-out 7th Street Entry. Maybe it comes from having seen so many shows with thirty/forty people in there max, but a packed 7th Street Entry has a electrifying energy to […]

The ever-popular country music duo Big & Rich is comprised of Big Kenny and John Rich, both guitar playing singer/songwriters. Before their inception in 1998, Big Kenny Alphin was a solo artist while John Rich […]

While the rest of the Twin Cities (including First Ave’s Mainroom next door) was busy getting ready for Sunday’s Soundset, I found myself marching to the beat of a different drummer as Red Wanting Blue […]