Metalheads are a resilient bunch. Decades of media slander and general societal disapproval doesn’t seem to have deterred them much.  So naturally, a little February blizzard didn’t stop them from flocking to the Cabooze last night. Despite the snow emergency at hand, the venue was packed with patrons from the moment I walked in, all eagerly anticipating the top-notch batch of bands set to play that night. 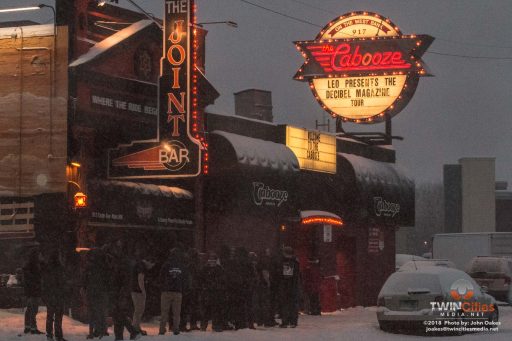 Upon the announcement of the 2018 Decibel Tour, I was ecstatic see two of my favorite modern metal bands, Khemmis and Wolves in the Throne Room, on one bill, especially considering the disparity between their styles. However, considering the fact that Decibel put it together, I wasn’t that surprised. Every year since the tour’s inception, each lineup has proven not only to be stacked, (some nights I like to search up past rosters and get all sad about not having been old enough to attend), but diverse as well. Back when the 2015 tour was announced, No Clean Singing hypothesized a formula for how the lineup is constructed. Just for fun, I thought I’d see how well it holds up when faced with the 2018 lineup, both in a contextual sense and based on the performances that they gave (NCS’ formula is in italics, my commentary is not).

The recipe is as follows:

Last on the bill: Pit-friendly band with connections to the metal underground, early in their career and sporting a charismatic frontman.

If this isn’t Khemmis, I don’t know what is. I suppose they didn’t technically get an actual pit going at the show, but there was plenty of intense fist-pumping throughout! One guy next to me even felt compelled to engage in air guitar performance throughout the majority of the set, which I found to be a completely appropriate reaction to Khemmis’ music. Rock on air guitar dude! Also, rock on Khemmis singer for pulling off that David Bowie Labyrinth t-shirt (now that’s a good gauge of whether or not you’re a charismatic metal frontman!).

Third to last: critical darling band in search of a wider audience, one that Decibel Magazine has put a lot of page space into supporting. The Decibel Tour amounts, to an extent, to a debutante ball for this group.

I’m not sure how much page space Decibel puts into supporting Myrkur (damn that expensive subscription fee), but they’re a critical darling if I ever saw one. Everyone from NPR to MetalSucks adores them, and for good reason—from their records, it’s clear that they’re a talented group. That said, I feel like I never quite understood them properly until I saw them live. What an experience. The hoods. The facepaint. The frontwoman intensely gesticulating at every available opportunity. They put on an extremely dramatic performance, in a good way. Touring them around the states instead of letting them hide out in Europe should earn them that “wider audience” that they’re apparently gunning for, according to the almighty formula at least.

Second to last: successful hard-touring band with a dependable legion of fans, guaranteed to put on a high-energy stage show.

It’s funny—before attending this show, I would never have thought Wolves in the Throne Room to be this type of band, but it all makes so much sense now! Two reasons why they’re perfect for this slot—

Headliner: classic death metal band with at least one classic album, as well as released a successful album in the past year.
Although Enslaved isn’t really a death metal band, they are, without a doubt, the resilient veterans that this slot calls for. What I love most about their inclusion here is the subversive way that they fit with the rest of the lineup. Again, this was something I didn’t realize until I saw them perform, but, similarly to some of the others (in specific regards to Myrkur and WITTR—Khemmis is kind of the odd man out of this discussion), they’ve spent their whole career defying people’s expectations of what extreme metal “should” be. They’ve been everywhere from black metal to prog to psychedelic music, and they don’t seem to have any intention of ceasing their explorations anytime soon. I’m not very familiar with their recent work, but from what I gathered through their set, it seems like they’re getting really melodic with it. Like, Deafheaven melodic. Goes to show that you don’t have to be in arts school to write an extreme metal track with more than four chords to it.

Anyway, great night overall. I felt a bit self-conscious at times in my Prof t-shirt wading through the sea of patch jackets, but thanks to all of WITTR’s sage smoke I could barely see five feet in front of me, so hopefully no one took offense. Seriously, we’re super lucky to have such a strong metal community here in the Twin Cities. Here’s to gathering together on a cold winter’s night to appreciate a wide array of good music.

BUZ*N 102.9’s Country 4 a Cause! Presented by HealthPartners & Park Nicollet returns to the Myth 10/3

BUZ*N 102.9’s Country 4 a Cause! Presented by HealthPartners & Park Nicollet returns to the Myth 10/3. All proceeds from the show benefit the Park Nicollet Jane Brattain Breast Center Community Outreach Fund through Park […]

Having moved from the Cabooze Plaza, LA band Awolnation packed the 3,200 capacity Myth with enthusiastic fans. They are touring in support of their 2nd album “Run” release in March of this year. Awolnation’s […]

The Wrecks (and Badflower) Drive Into The Garage November 19th

South-Metro music fans are in for a double-treat Monday November 19th when The Wrecks bring their Panic Vertigo Tour to The Garage in Burnsville. The Wrecks are one of the hottest young indie rock bands […]