“An evening with They might be Giants” is more accurately described as “An all-niter with TMBG”. The band did not play one but two generous sets and 2 encores. Not that anyone in the audience was complaining. The crowd in the, once again sold out, First Avenue was friendly, boisterous and clearly there to have fun. There were plenty of teenage kids brought in by their parents. TMBG are touring supporting their brand new album Glean (releasing 4/21).

In what had to have been a First Avenue first, John Flansburgh sported a brown Corduroy sports coat. The band opened with “The Mesopotamians” and the crowd was into it and singing along from the first cords. Interestingly the band used 2 sizable stage facing LED light towers to provide front lighting making the evening unusual for the photographers as well. While John Linnell stayed with is keyboard, Flansburgh switched positions on stage dragging his microphone stand around, keeping both sides of the house interested. 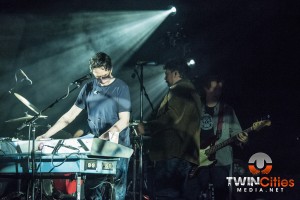 TMBG’s quirky sense of humor became quickly apparent not only in their music but also between songs. In a joke about Vancouver the band described themselves as “The US version of Barnaked Ladies”, sought (and received) feedback on their Canadian accents. “Number Three” twanged out like the band was the “Good Ole Country Boys”. They managed to pull off a cover of Destiny’s Child’s “Bills, Bills, Bills” as a group of middle aged white guys without sounding like a Karaoke Night gone wrong.

A skit brought back their “Dial a song” days of recording songs on an answering machine and inviting their fans to call. Things quieted down for “The Lion sleeps tonight” and “Istanbul, not Constantinople” was just the two Johns with a  guitar and an accordion. With a super sized encore the band thanked their fans and released them into the rather late night. 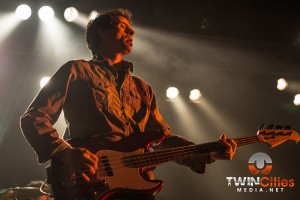 After a day of playing the role of a hermit and just laying around my apartment for majority of the day, I was more than ready to finally get out of the apartment. The line-up […]

Haley Reinhart Turns Me Into Roger Rabbit At The Amsterdam

I had Haley Reinhart’s show on my radar for a few weeks filed under “if my schedule works out”. Well my schedule worked out but when I checked the Varsity Theater for that show last […]

In the years since Steve Earle release his first EP in 1982 he has become an American institution in all things Americana. His music spans across the genre and his songs have been recorded by […]