In less than 30 day, Northern Invasion will be hitting the open air Somerset Amphitheater. Soundgarden and Kid Rock will headline Northern Invasion 2017, which hosts the biggest rock bands for over twelve hours each day on three stages, and offers a top tier campground experience. Single day General Admission tickets for Northern Invasion are available available for only $64.50.

The daily band lineup (subject to change) for Northern Invasion is as follows: 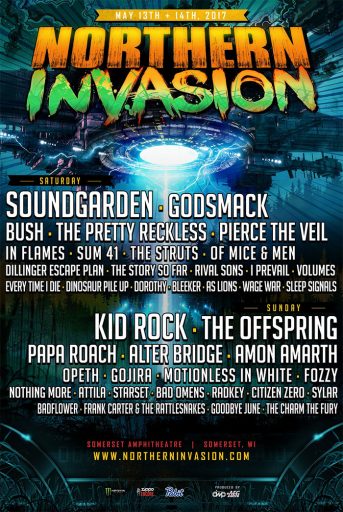 Weekend tickets, as well as hotel, camping and VIP packages are also available for purchase. Available camping packages (RV and tent options for 3 nights) include Groupie, Roadie, Star, and Ultimate Package at Float Rite Park. Hotel packages offered for 3 nights are: Bronze, Silver, Gold, and Platinum. All camping and hotel packages include a $25 festival merchandise voucher for each person. For details on each package, visit: www.NorthernInvasion.com. As in the past, General Admission ticket discounts are available for active military through Northern Invasion partner GovX (www.govx.com).

Northern Invasion is supported by our rockin’ sponsors: Monster Energy, Zippo, and Pabst Brewing Company. These partners, along with many others, will feature interactive experiences, artist meet & greets, and other unique fan engagement opportunities throughout the festival.

Rock titans Disturbed and Rob Zombie have have joined forces on a co-headline tour through the month of May 2016. Ahead of that, Disturbed has already kick off their first tour following their 4-year hiatus. […]

My weekend was amazing– a little out of the ordinary for me– but amazing. From finally experiencing the very talented Minnesota Orchestra on Friday night to witnessing comedic genius with Kevin Smith and Jason Mewes […]

Whenever Starset is playing near Minnesota, I always try to get to their show.  It is different every time I go since they are constantly adding new things on stage to keep everyone’s interest.  So, […]