The lineup of festival experiences and The Road To Northern Invasion Battle Of The Bands, hosted by 93X in Minneapolis have been announced for the second annual Northern Invasion, Saturday, May 14 and Sunday, May 15 at Somerset Amphitheater in Somerset, WI, just outside the Twin Cities. Northern Invasion will feature the biggest names in rock on three stages with expanded campgrounds. After quickly selling out its inaugural year with 25,000 fans in attendance, Northern Invasion expands to two full days in 2016.

Concertgoers are encouraged to save money by purchasing Northern Invasion tickets now at www.NorthernInvasion.com. Ticket prices will increase on Monday, April 11 at Noon. 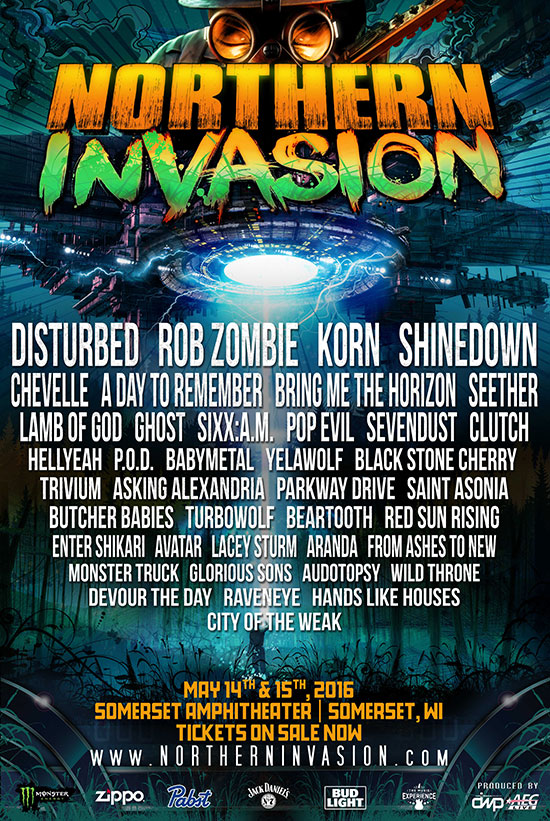 The Road To Northern Invasion Battle Of The Bands, hosted by 93X in Minneapolis, will offer one lucky band the chance to play Northern Invasion. From now until April 10, vote for your favorite band at http://www.93x.com/road-to-northern-invasion/. The Top 5 bands will play a live showcase at Mill City Nights in downtown Minneapolis on April 29, with the winning band receiving the coveted performance slot at Northern Invasion.

Northern Invasion is proud to partner with Surly Brewing to debut the “Northern Invasion Pale Ale.” The NI Pale Ale, a highly aromatic pale ale with citrus and pine flavors is Surly’s take on the classic pale ale style and is an exclusive canned beer just for fans of Invasion. The limited edition beer will only be sold at concession stands during the 2nd annual Northern Invasion in Somerset, WI.

Bud Light: America, they say we’re a nation divided. They say we disagree on everything, but they’re wrong. We agree on a lot: liberty, justice, ROCK MUSIC, and beer. Nothing brings America together like Bud Light and nothing brings rock fans together like Northern Invasion. That’s why we’ve formed the Bud Light Party – a party for everyone. We are the fake political party America needs right now and we’re stopping by Northern Invasion to supply ice cold beer all weekend long. Because no matter where we stand on the issues, we all sit on the bar stools with our hands raised in the air listening to our favorite rock bands. America has seen the light, and there’s a Bud in front of it.
Facebook: facebook.com/budlight
Instagram: @budlight
#budlightparty

f.y.e.: f.y.e. will be hosting the ultimate fan and artist interactive experiences throughout the festival. f.y.e. is the only place at the festival to get all your favorite band’s music – and maybe even get to meet your favorite Northern Invasion performer. Check back for updates on artist meet and greet and autograph signing sessions.
Facebook: facebook.com/FYE
Instagram: @officalFYEmusic
#unitedstatesofFYE

Jack Daniel’s: “Taste of Tennessee” invites visitors 21-and-up to come enjoy the show from the brand new Jack Daniel’s stage trailer with a great view to our second stage. The Jack Daniel’s Experience at Northern Invasion will be the place to be throughout the weekend.
Facebook: facebook.com/jackdaniels
Instagram: @jackdaniels_us
#jackdaniels #BornToMakeWhiskey

Zippo: Zippo Encore will be back in action at Northern Invasion with a full stock of Zippo lighters, including the limited edition Northern Invasion festival designs. Come by and check out their contests and giveaways or get a free lighter fill or tune-up. Be sure to bring your Zippo lighter to the festival, it could be your ticket to special “Can’t Buy” experiences.
Facebook: facebook.com/zippoencore
Instagram: @zippoencore
#zippo #zippoencore

Jägermeister: Jägermeister has been rockin’ with Northern Invasion fans since day one and we are excited for an even bigger and better 2016 festival, with the launch of the Jager Live Lounge. This will be a must see festival destination for fans 21+ and will feature a live DJ, lip synch battles throughout the weekend, and plenty of cold beverages.
Instagram: @jagermeister
#jagermeister #Jägermeister

The Northern Invasion Camping area will be open from Friday, May 13 at 12:00 PM CT through Monday, May 16 at 12:00 PM CT. Camping packages are sold for spaces on-site as well as adjacent to Somerset Amphitheater on the Float Rite grounds. Upgrades and camping packages include access to the Friday Night Bonfire Party.

Northern Invasion is supported by great corporate partners including Bud Light, f.y.e., Jack Daniel’s, Zippo Encore, Monster Energy, Deep Eddy Vodka, and Jägermeister. These partners, along with many others, will feature interactive experiences, artist meet & greets, and other unique fan engagement opportunities throughout the festival.

Do you ever dream about inviting some of your favorite bands to play an intimate show just for you and your friends? Well, that’s exactly what 3 Floyds Brewing seemed to have done on Tuesday […]