You know those “targeted” Facebook ads? That ones that seem to know what you like and what you should need? Well, in my case they actually helped with my daughter’s choice of college. She was taking a gap year after high school when Facebook decided that I, as music blogger, certainly should be interested in music education and began showing me ads for an open house event at IPR – the Institute of Production and Recording, right here in Minneapolis. After the first day, we knew my daughter had found what she had been looking for in a college and she started her journey to a certificate in Live Sound and Show Production last fall.

The campus tour and orientation left me impressed and meeting the head of the program, Peter Greenlund,  left no doubt about his Street Cred – C’mon the dude’s best man at his wedding was Willie Nelson! The growth I was seeing in my daughter was a joy to experience. Hesitant about going outside sound at first, her teachers guided her to enjoy lighting and somehow she took a strong liking to wiring. The different programs at IPR compliment each other and students from different areas often work together as teams and collaborate. The campus also encourages them to experiment and make use of facilities and equipment, both of which are outstanding  As their final exam, the Live Sound Students put together what they call “Big Show” a live performance with multiple bands.

The 5 students in the graduating class took on different assignments for each artist. My daughter picked monitors for Mae Simpson and the lights for the headliner. This turned out to be an education for me as well. As my long suffering family knows, photographers will talk your ear off about light. But as much as I have complained about or complimented the choice of lighting at shows that I have covered, I never thought about how much work went into their design. My daughter approached this with an attention to detail that would do a Beyonce tour or a Rammstein performance proud (Sadly no pyrotechnics were allowed at IPR so the flame thrower stayed home). 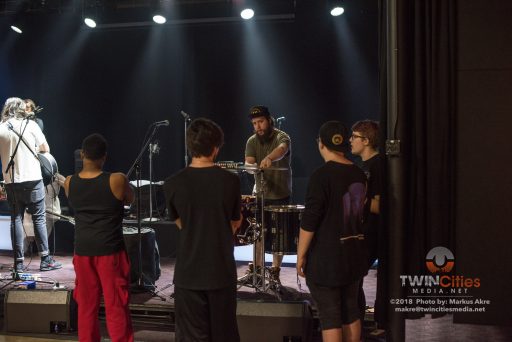 After bringing in equipment (thankfully not the multiple trailer loads stadium tours have) and setting up, they worked through a soundcheck for both Front of  House sound and monitors.

As they were shooting a couple of video, the band ran through “Black Mamba” twice and there was some fine tuning of monitors – that’s the smaller speakers that are usually pointed at the stage so musicians can hear themselves and other band members.

This one turned out to quite interesting as their percussionist brought some instruments I have rarely seen on stage and it took some time getting the sound right.  The Vibraslap in particular needed some reverb “It’s to short, but it was the only one at the store”. With the help of Peter Greenlund the desired result was achieved earning him the compliment “That’s why you’re Peter”.

The two bands clearly had not shared a stage before, but both have quite interesting percussion which led to a meeting of the drummers standing around the bongo drums talking shop. 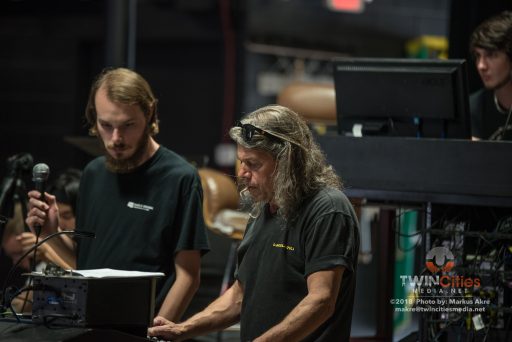 As the audience trickled in, a short briefing by Peter organized the crew, with a focus on the set change (done festival style, with everything pretty much plugged in). That’s when reality set in for one student, “There’s a lot of people out there”, she exclaimed.

Having seen Mae Simpson’s sound check, I thought I knew what to expect for her set. HOLY FUNKY CRAP! Was I wrong! From the first song Simpson prowled the stage like a red haired panther jamming it up with her guitar player and percussionist. The music is a lively funk / soul blend but her voice and stage presence is what makes it stand out. Her energy would leave a hard core punk band out of breath. She ditched her guitar after the first couple of songs and then the whole room became her stage. Trips up on the raised stage, frequent journeys into the audience, jumps, hair flipping – all that without missing a beat. It’s Funk but the attitude would be well suited to a metal / hard core band. At some point the mic slipped out of her hand – Peter to the rescue whipping out the prepped mic for Marah. Turns out they had time for one more song and if  “Wrong side of the bed” left anyone not moving, I missed it. It came complete with a fake curtain call that had everyone chuckling.

Mae Simpson has a release show at the Icehouse on 7/5 and a ton of festival appearances coming up. Miss them at your own peril. This one has to be a front runner for best new band in the Twin Cities this year.

The change between bands went quickly as microphones and most instruments were dialed in. Students also switched responsibilities from opener to headliner so each of them was responsible for at least 2 areas throughout the show.

Marah in the Mainsail became one of my favorite bands after catching them live back in 2015. The band describes themselves as cinematic and that’s a quite accurate description. Their music is dramatic with their live show pushing that even further. They went through some lineup changes recently but now had consolidated as a 5 piece band. Marah in the Mainsail also are taking a step forward as a full time band. They have launched a Paetron Page to help fund the next chapter in the band’s history. Their latest album “Bone Crown” is one of those rare conceptual albums that tells a whole story from the first song to the last.

Video shoots were done for two of their songs “Bone Crown” and “Leviathan”.

The intimate venue with it’s low stage added to atmosphere. Percussionist Austin Wilder (who had forgotten his signature chains) and trombone player John Baumgartner  took it into the crowd. During “Bone Crown” the fans got up close with Austin Durry and shouted the chorus back at him. Drummer Kian Dziak’s coordination with Wilder stood out to me as often their movements synced. Original member Cassandra Sabol is back in the lineup and she was on bass for this show. Despite joking that she had only just learned to get through “Bone Crown” without mistake, I for one, love seeing her back with the band.

Loud cheers from fans prompted Marah for an unplanned encore “Wendigo”. There was a brief “Oh CRAP!” moment for the students but the quality training they received kicked in and the encore was delivered in spectacular fashion.

As fans hung out with Marah In The Mainsail, there was plenty of action behind the curtain as equipment was returned to storage and many of the lights used for the show were taken down.

Yes, I am far from a neutral observer in this particular case, but as a veteran of close to a thousand shows I was impressed by the students’ performance. There alway are small problems during a live performance, but the speed at which they were corrected spoke of the education they received and their talent. I’m no teacher but everyone gets and A+ in my book. I look forward to seeing your work at future shows

The temperature was quickly dropping through the teens as I made my way down a crowded Hennepin Avenue.  I felt a bit of trepidation as I walked into the State.  This was my second foray […]

Friday nights in the summer – there’s really nothing else like them. And there’s something even more magical about the warm glow of a summer evening in Minneapolis after enduring what felt like a winter […]

Epic Performance by Tony Bennett at the State Theatre

On Thursday evening attendees were whisked into the past at the State Theatre. The night began promptly at 7:30 p.m. with no delays, and a four piece ensemble consisting of a Steinway & Sons piano, […]