Synthpop singer Lights lit up Mill City Nights with bass, piano, and smoothing songs. She opened her 16 song set with “Muscle Memory,” off of her newest album, “Little Machines.” The album debuted number 5 on Canadian charts and number 34 on the U.S. Billboard 200.

The concert was a sensational balance of songs from her new album as well as ones from her old ones. This made old and new fans feel welcome. Some songs included “My Boots”, “Siberia”, “Toes”, and “Running With The Boys”. Lights (aka, Valerie Anne Poxleitner) spoke of her worldwide tours, getting married, releasing an album, and baby that recently turned 1yr. Feeling close with the crowd, she calmed the night down, and played an acoustic version of her song “Don’t Go Home Without Me,” an endearing love song she wrote towards her husband. The crowd displayed a sea of lit mobile devices and sang along. It was a touching moment to watch. After the acoustic break, the concert hyped back up with bass and beats throughout the rest of the night, including a two-song encore.

Overall, Lights performing live is a show not to miss. She brings a great live performance, has an amazing atmosphere and passionately connects with her fans during her show. With that being said I say this to you, make sure you go see Lights perform while she is on her Little Machines Tour, live in the moment and I guarantee you will leave with great memories. 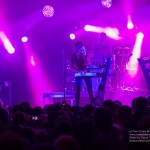 The night before Thanksgiving we had a chance to stock up on our Rock’n Roll vibe before facing relatives with no cool at all. The Ike Reilly Assassination headed for First Avenue. Illinois’ Ike Reilly […]

Walk The Moon Walk On Water / Snow At The Palace Theatre

I was curious what to expect from my first all ages show at the Palace, Unlike First Ave the setup remains the same with all bars open. The crowd was a wide range of ages […]