After braving extremely cold temps outside of Mill City Nights, fans piled in for Swedish Death Metal group Tribulation. The last time Tribulation came to the states was two years ago while on tour with Watain. That tour proved to be very successful as they gained a huge following. And Tuesday night was no exception, as they find a horde of followers who were ready to see them again. Still supporting their highly praised sophomore album, The Formulas of Death, Tribulation have quickly built a name for themselves as an act that puts a lot of thought and time into their music. Extensively active on stage, Johannes Andersson (vocals/bass), Adam Zaars (guitar), Jonathan Hultén (guitar), and Jakob Ljungberg (drums) were impressively full of adrenaline as they put on a frenetic performance. Bringing their creations to the stage, the band pumped out songs with a strong atmospheric sound that imbue the air with an energy that one could not help but follow through with headbanging. Interestingly, Tribulation strays from the norm Heavy Metal guitars and played with unique Rockabilly guitars that packed a massive sound. Portraying a mystifying and horrific scene that complements their style, Tribulation’s Progressive Black Metal vibe was an interesting combination that not many can pull off. Though Tribulation was an opening band, their performance was that of a headliner. 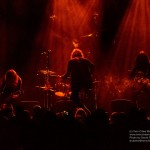 Excision for Dessert: Did The Evolution Tour Kill Cupid on Valentine’s Day?

I was debating between chocolate cake and ordering an old fashioned while my Valentine was using the restroom this last Friday night, before I shot a glance down at my phone to see a text […]

Last night, doting music fans gathered in droves for “An Evening With The The Rembrandts” at the Parkway Theater in South Minneapolis to be serenaded by one of the most iconic music duos of the […]