Inrid Michaelson got her start in the early 2000s as a strictly independent artist putting out her albums through MySpace catching her break in 2006 when her music was featured on Grey’s Anatomy. She has fiercely maintained her independence releasing her own music. Her current tour headed to the University of Minnesota’s beautifully renovated Northrop auditorium.

Not keeping up with an artist can sometimes sneak up on an unsuspecting journalist. Well, consider me surprised. My preconception of Ingrid Michaelson “a girl and her guitar” was blown out of the water with the first cords of “Time Machine” from her current album “Lights Out”. The fact that her intro music included House of Pain’s Jump Around should have been a warning. “Time Machine” was rocky, her voice low and bluesy with a rough edge. She changed gears and broke out an ukulele for her second song “Everybody”

One of Michaelson’s trademarks is her ability to connect with her fans during her concerts. She told the audience to sit back and relax from their hard Tuesday but to save their energy for later when she would tell them to get up and dance. She then quipped that people in the high balconies should remain safely strapped in their seats. 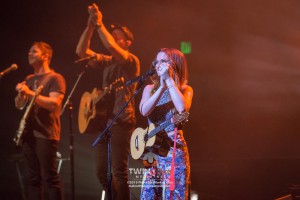 “Lights Out” has shown us the more energetic and pop side of Ingrid Michaelson and her stage setup reflected that. Touring with a 5 piece band, the stage had elevated level, what can be described at “shag carpet sculptures” and an impressive light show. Blending old and new songs as well as some great covers throughout her set, Michaelson gave her fans what they came to see and released them into the warm summer night happy and probably still humming one of her catchy tunes.

Set List (pending confirmation)
Time Machine
Everybody
Overboard
Black and Blue
Keep Breathing
Home
Maybe
Sort Of
The Way I Am
You and I
Be OK
Soldier / Poker Face / One of Us / With or Without You / I Will Be Right There Waiting For You / Call Me Maybe / Ghost
Warpath
Chain
Afterlife
Girls Chase Boys
Encore:
Can’t Help Falling in Love (Elvis Presley cover)
Fire
I Love It (Icona Pop cover)

Although shows are slowly but surely starting to pick up, something has been missing since the first of the year. I couldn’t quite put my finger on it but, as soon as I walked into […]

Article by Colin Dobin – Special to TCM It was a beautiful Tuesday evening when I found myself patiently waiting in line outside of the Armory. I have heard so much about The 1975, especially […]

Styx took over the Mystic Showroom with an outstanding performance that was filled with all the greatest hits. The performance unveiled to a standing room only crowd. Those fortunate to be in attendance did not expect such […]