One of the things I like to do for our readers is to type out set lists of shows we cover. Well, I looked at the image of Guided by Voices set list that I shot from First Avenue’s balcony and said to myself: “Screw this, I am just going to post the image………..”.  I should have known something was up when singer Robert Pollard carried giant sheet of paper reinforced with gaffer tape on stage……. 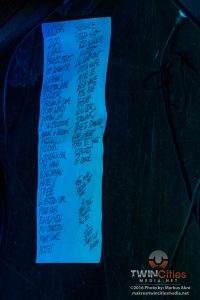 Oklahoma’s Broncho started the show. I had covered them at the Entry just a few weeks ago and loved the set in the smoke filled small venue. The band was tight (as far as one can tell with Broncho) and fans that were there to seem them were clearly into the set.

The setup for Guided by Voices show at First Avenue was different. The pit in front of the stage was collapsed at the band’s request – if you were counting on nose hair shots of Pollard, you will be sadly disappointed. The set started with “The Quickers Arrive” fans were into it from the get go. With 1900+ songs he has written and introductions were short and to the point for each song. What shows the wide reach of Pollards work was the number of Minnesota musicians in attendance. Some of the more lesser known songs were offset by staples and material from their current release “Please be Honest”. The monster set concluded with multiple encores worthy of Pollard’s epic catalogue. Overall a great experience for fans to see Guided by Voices without the time constraints of a festival.

The bros were out in force Sunday and by the looks of it, a bunch of them made it on stage. Clad in long cargo shorts, T-shirts, ball caps and sunglasses Slightly Stoopid’s attire matched […]

Troy “Trombone Shorty” Andrews and his band Orleans Ave. brought their brand of New Orleans music, a mixture of funk, R&B, rock and hip hop, to The Palace Theatre on Friday night. They are out […]

After a long day of shopping and recovering from a wine drunk Thanksgiving, a show was exactly what I needed to get to feeling back to normal. I was clearly not the only one in […]