I’m a firm believer in the idea that you can’t judge a band until you see them live. There have been far too many bands that I completely ignore when listening to them at home but, when seeing them live, fall head over heels for everything they are. That being said, I’m also an advocate for second, third, fourth… you get it… chances. You never know if a band is having an off night or if the singer is copping an attitude because he’s going through something in his personal life– you just don’t know so who the hell are you to write them off. That’s why I chose last night’s Dying Fetus & Thy Art is Murder co-headlining tour instead of the Buckethead show or the Widowmaker show or the million other shows going on in town last night. I had an axe to grind with one of the bands and I needed to make sure that axe still needed grinding.

Due to a super early set time and the fact that I still had to feed my cats after work, I unfortunately missed opening act Sanction but did make it downtown just in time to catch Rivers of Nihil. I have seen these guys multiple times but they never bore me. Although their live show may not seem that exciting as the members aren’t running around like balls of energy and the crowd never seems to be quite awake when they take the stage, Rivers of Nihil always leaves me impressed with the pure musicianship and stamina when it comes to their complicated lines of music. Even though majority of their set seemed to be plagued with sound issues, this five piece blasted through their quick without missing a note.

Enterprise Earth was up next and although they have only been a band since 2014, their impact on the scene is clear and evident. Hailing from Spokane, WS, EE is a deathcore band that seems to stay true to their roots while still keeping a sense of uniqueness about their music. I said it last time I saw these guys and I’ll say it again- Singer Dan Watson has one of the most incredible voices I have ever heard. The way he is able to shift from the highest of highs to the lowest of lows with a sense of ease is truly remarkable. Watching him strut from side to side of the stage while doing the intense vocals is nothing short of astonishing. As I stood there, shocked with my jaw on the ground at this young group’s talent, I neglected to realize that the ever-growing crowd has opened up to form a ginormous pit. When I finally noticed, it was too late and I was swept into a mess of people that were clearly excited to see EE. I honestly hadn’t gone to last night’s show for this band at all but, when their quick set was done, I knew they were going to give the co-headliners a run for their money.

The group following Enterprise Earth was the band I had an axe to grind with. Thy Art is Murder is a great band. Don’t get me wrong. Their classic deathcore sound is as close to perfect as a deathcore band can get and their live shows are honestly some of the best I’ve seen in the genre. That being said, singer CJ McMahon ruined the band for me a couple of years ago. He quit the band citing the fact that he doesn’t make enough money touring the world in order to stay in this lifestyle. Newsflash– if you’re in the music business (in any capacity) because you want to ‘live comfortably’ then you’re doing it wrong and you should just quit now. Then, all of a sudden, CJ was back. He blamed the drugs, he blamed bad life choices, he blamed not being able to spend time with his wife– he blamed a lot of things. I truly wanted to believe his apology and give this band the chance that they deserved but his little temper tantrum left a terrible taste in my mouth. I don’t know where the spark of optimism came from but as soon as the Australian group took the stage, I seemed to forget about my personal grudge against the singer and truly gave this band a chance.

I’m an idiot. They were so damn good. I mean, really no other way to put it. The perfection of their set is something other deathcore bands can only strive to accomplish. I watched in amazement as CJ stormed from side to side of the stage breaking only to get up on the platforms at the front of the stage to amp up the crowd a little bit more (which really wasn’t necessary). Although the other members of this five piece seemed to stay in their little section of the stage, there was no lack of energy as they chugged through their ten song set and the lights flashed and whizzed around the venue. The intensity and brutality of everything going on on stage made for a potent and menacing show. Sure, that may not sound great but at a heavier than heavy metal show like this, that’s exactly what you want.

So clearly I was over the grudge I had been holding against this band. Usually that’s enough for me and I chalk that up to a win but TAIM went past that and actually earned more respect from me than many other bands in the genre. Half way through the set CJ stopped the group and explained why they wouldn’t be playing “Whore to a Chainsaw” which is the song that seems to have catapulted them into the international world. CJ wasn’t in the band when the song was written and he didn’t agree with the misogynistic lyrics. “We’re not going to play that fucking song” CJ stated and he went on to explain that the band members all came from mothers, they have sisters, daughters, aunts and so on. Sure, this seems like a small thing and almost common sense but this is a very brave stance to take in this scene. There’s a reason I have a ‘sausage fest meter’ on my blogs– there aren’t many females in this world so bands get away with a lot. Chalk it up to just lyrics, or get offended by it– it really doesn’t matter. What matters is here’s a band that I had almost written off completely taking a stand on something that truly matters to me and the amount of respect that earned them easily catapulted Thy Art is Murder from one of my most hated bands to one of my favorites. 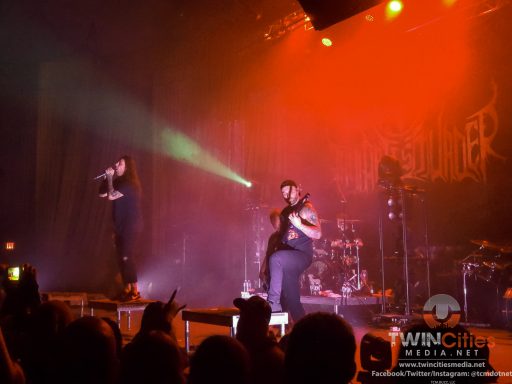 TAIM clearly stole my heart and I needed some time to process that but we still had one band to go. Dying Fetus has been a staple in the death metal scene since the early 90’s. Their sound is something unique which has made them one of the most influential bands in the sound. Their faster than fast blast beats mixed with their heavier than heavy breakdowns keep these guys at the top of the genre. Although the years have passed and the group has released eight albums at this point, not much has changed with this trio. The intensity and brashness of the group is still there and the way the crowd reacts to every note is still alive and kicking. Although they were clearly the oldest group on the line-up, they were given the same amount of respect as the opening acts and that was definitely a heart-warming thing to see. Dying Fetus’ set was a great reminder of why I chose to go to metal shows over any other show. The intensity was a blast in the face and a punch in the gut and sometimes that’s all you need.

It’s not fair to write off a band due to something one member says in one interview. You don’t know where their head was at at the time or what they were going through. Musicians are just normal people having the same mental breakdowns as the rest of us. Respect the breakdown both in the music and in life.

Shows are slowly but surely coming back to life up here in the Twin Cities and I could not be happier. I’ll admit, my show choice for Saturday night was not my normal cup of […]

The Dirty Heads will be bringing their chill, reggae vibes to Mill City Nights on Thursday, November 3rd. You can feel and hear the Sublime influence from these guys but they are still nothing short […]

Anvil Still Has It After 42 Years

Photos by David Rubene   Billy Bragg wasn’t the one legend I was able to cross off my bucketlist this week. I spent my Saturday night with the one and only Anvil. Yes, that Anvil. […]