Cadence & the Wolf trace their beginnings back to the summer of 2007 and something called GRRR (Girls Rock’n Roll Retreat). It’s a weeklong program that takes girls aged 8-16 of all skill levels and turns them into rock bands. The participants write their own music (with some guidance) and perform in a live concert that is light-years beyond the usual show & tell that’s normally found at the end of a summer camp.
Out of GRRR came a band by the name of Half Demon Doll which released their first EP in 2010. 3 1/2 years of work and a name change to Cadence & the Wolf later, they released their first full album “Strong Minds, Strong Thighs” this week on Bandcamp and showcased it at the Amsterdam Bar & Hall this Friday.

Their set started with a song from their new album “The day I met me” and it became clear that their description of their album is quite accurate: “A concoction of four piece, female vocals and rock n roll guitar riffs with a dash of female empowerment mixed together in a Minneapolis basement”. Jacobsen’s stage presence and vocals quickly took control of the room. The band loosened up noticeably after the first song and became livelier. This translated to the audience and pulled them away from their chairs and got them closer to the stage. By the 4th song dance moves and flying hair proved they had captured the crowd. 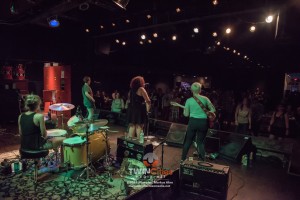 Cadence & the Wolf’s music is straight Rock with a salute to Grunge carried by Stahlmann’s guitar and Jacobsen’s voice. The Current described their sound as “Ani DiFranco fronting Pearl Jam” – I would take that as a compliment. During the set the band members took time to thank everyone who helped make the album with a special tip of the hat to their engineer Amy Van Patten and her patience during the long gestation period.

With GRR going strong we have seen other bands form out of its cradle. Cadence & the Wolf set a high standard and serve as inspiration. Overall I was quite impressed by this young band and hope their album has the success it deserves.

Girls Rock’n Roll Retreat / Sherock
Set List:
The Day I Met Me
Suitcases
Me Too
Runaway
Mistake List
Merry Go Rounds
The Beginning Of
The Race
Perfect Little City
Jenny Craig on a Stick
Lost In Moments
Shame Escape
Do You Feel Tall?
Why I Don’t Believe In Aliens
Jack Of Spades
Isolation

I had come to terms with the fact that last night’s show just wasn’t in the cards for me and I kept trying to tell myself that that was okay but, deep down, it wasn’t. […]

Father John Misty and Jason Isbell Light Up The Armory

Flashback to May 28th, 2011. I was 16 years old and had convinced my parents to take me to First Ave that night to see The Arctic Monkeys. As I walked out of that show […]

For some of the athletes Thursday’s biggest challenge turned out to be rain, rather than a fellow competitor. The heats for the Skateboard Verts had been moved to Wednesday and that turned out to be […]