ZZ Ward’s fan base spans a wide range of age and interest groups. That much was evident Friday night at First Avenue, the first of her 2 days. Groups of soccer moms (ok alleged soccer moms), couples of all ages and a surprising percentage of guys who did not seem to be devastated to be there. Ward’s tour is promoting her current album “This means War”.

Starting her set with “Put the Gun down” ZZ Ward took the audience on what she described as a journey, that lead them through the singer’s different stages. It included some of her older songs that show her blues roots. Those roots are still evident in her current songs. She plays the harmonica on several of her songs. There was no need to backup singers as many of the audience sang along to most numbers. The stage setup was simple with light being well used to highlight the artists. For the slower songs the light dimmed allowing the LED candles set up around the stage to set the mood. Ward’s interaction with the audience was lively and genuine. 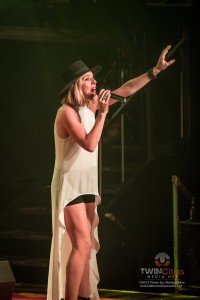 Overall ZZ Ward delivered a polished, well received set that allowed her voice to shine and support her stage presence. There are still a few tickets for Saturday’s show available HERE
Set List:
Put the Gun Down
Til the Casket Drops
If I Could Be Her
OVERdue
Cinnamon Stix
Got It Bad
Lonely
Ride Or Die
Rescue
Chains
(Nick Jonas cover)
Charlie Ain’t Home
Lil’ Darlin
Marry Well
Criminal
Move Like U Stole It
Blue Eyes Blind
Encore:
365 Days
LOVE 3X

Shows have been a bit few and far between lately but with an upcoming flight to California, I knew I needed something to calm my nerves. My flight may not be until tomorrow morning but […]

Belle and Sebastian lighten the mood at the Palace Theater

Belle and Sebastian are the Scottish indie septet of everyone’s dreams and when they announced that they would be playing a show at the beautiful Palace Theater in St. Paul, nearly everyone I know (including […]