Zenbox Izakaya’s 2015 Ramen Attack was titled Heroes Edition. With all net proceeds being donated to the Minnesota Children’s Cancer Research Fund, each bowl of ramen served and each noodle slurped became a heroic task. The chefs, volunteers, and attendees should have been issued capes!

It its third year, Ramen Attack changed its system and made a limited number of passports with food and beverage tickets available. They release additional tickets as product became available. Since the event was free this approach avoided the lines that were challenging in previous years. The lines were reasonable for even the most popular Ramen.

Mu Daiko filled the courtyard with the sound of Japanese drumming

During all this DJ Steez kept the crowd entertained 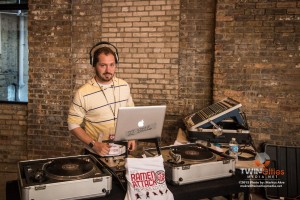 The Mill City Museum provided a unique background for the event. Overall Ramen Attack 2015 was well organized and judging by the many smiles and broth stained cheeks we observed a huge success.

In a time when YouTube sensations come and go in weeks, Scott Bradlee’s Postmodern Jukebox has managed to stay relevant for several years. From an early start in 2011 and getting serious in 2013 the […]

Some people think that metal music is just a dick showing contest of who can play the fastest and scream the loudest. I honestly used to be one of those people but, in my angsty […]

Tide Rolls Into Jersey Shore With Southside Johnny and the Asbury Jukes. Two Shows at Dakota April 8 and 9

Jersey Shore rock and roll icons Southside Johnny and The Asbury Jukes will play two shows at the Dakota on April 8 and 9.  Details and tickets are available HERE. Southside Johnny has a well […]