White Lung’s 2014 album “Deep Fantasy” has been described as “2 minute blasts of anger” by one critic. While that may get you sent to a therapist’s couch if you live in a “Flowers and Puppies” world, for a punk band that is high praise. As part of their summer tour, the band played the 7th Street Entry Thursday night. 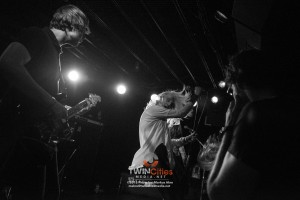 Reading up on the band prior to their show one theme kept reoccurring: “White Lung is a GREAT live band” so I thought I was ready, silly me! From the first chords the band is balls out, full speed ahead and damn the torpedoes. The Entry is a small, low venue and every cubic inch was filled with singer Mish Way’s stage presence. She feeds of her audience and compared the atmosphere at the Entry to Russia (in a good way). She thanked the crowd for getting into it and not standing all cool and condescending in a corner with their arms crossed.

I left the show smiling and feeling younger – not to shabby for a cool Thursday night.

Set List:
Sycophant
Face Down
Monster
Bad Way
Bag
Wrong Star
Snake Jaw
I believe you
Down it goes
Thick Lip
Two of you
Blow it South
Take the Mirror

Minneapolis electronic record label Pytch started their monthly residence at The Icehouse last night. For the next 3 months, they are going to showcase their music and artists they collaborate with. For yesterday’s show, it […]

The Contortionist and Monuments at The Cabooze on April 5th, 2016

It was quite the night of metal at The Cabooze on Tuesday, April 5th, 2016.  The Contortionist, Monuments, Entheos, and sleepmakeswaves made a stop during their latest tour.  Local openers By The Thousands and Mithya […]

In Minnesota, Fall is in the air with cooler temperatures creeping up on us. However, Mill City Nights was in the heat on Wednesday night with featured artist The Agonist. It is always great to […]