Don’t let a Friday night go by wasted on your couch while binge watching something on Netflix. Come out to The Turf Club and feel some excitement! Them Evils will be taking over the Saint Paul venue on Friday, May 25th and will definitely be more than exciting than whatever you’re currently watching on Netflix.

THEM EVILS are a late-night joyride through rock and roll’s seedy underbelly. Born in the shadows of neon vice and nocturnal living in Las Vegas, nurtured by the proximity of Hollywood’s famed Sunset Strip, and cradled in the same Orange County, CA home that has become synonymous to punk attitude and hard-driving rock history, the leather-and-black clad trio pen unapologetic songs that bristle with a nasty energy beﬁtting their name. Tickets are still available HERE. 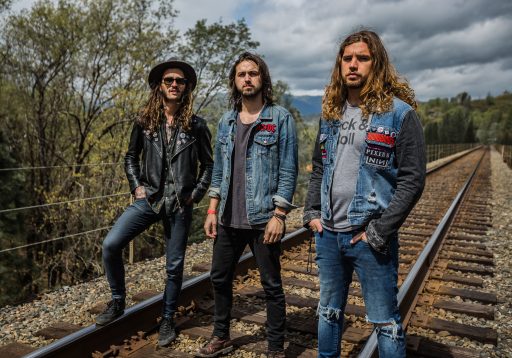 Inspired by equal parts of rock giants like Led Zeppelin, AC/DC, and Queens Of The Stone Age, among others, guitarist/vocalist Jordan Grifﬁn, bassist Jake Massanari and drummer David Delaney pay tribute to their roots with every crushing note on their latest EP, Rollin’ Stoned and Livin’ Free, a 6 song homage to the unholy goodness that is THEM EVILS. “We pretty much made our own scene,” Grifﬁn says. “We started out doing straight up rock and roll, and that’s what we’re still doing… that said, we’re always evolving.”

Grifﬁn and Massanari moved to Orange County, CA from Las Vegas in 2013, with nothing else to fall back on. It was there they met Delaney – the ﬁnal piece of the THEM EVILS puzzle they’d been trying to complete for years. Two EPs later (their self-titled release and the lineup’s Cold Black Love debut)… They have toured with bands such as The Pretty Reckless, Alter Bridge, Zakk Sabbath and 10 Years while sharing stages at festivals with some of the biggest names in Rock n’ Roll. They are on a headlining tour this spring. They played Welcome To Rockville and Carolina Rebellion and will be playing Rock On The Range on Saturday, May 19th!

The Missing Letters will be opening up for Them Evils. Rock n Roll has deep history in the Twin Cities. Many hallowed bands have emerged from the snow covered neighborhoods of Minneapolis and St Paul. Even the clubs have an honored tradition – No band climbs rock’s ramparts without a stop at First Avenue or the Fine Line. Maybe it has to do with the cold outside that keeps generation after generation of kids fostering the instinctual drive of alternative rock … What ever it is, the music continues to stay hot, and now, that heat embodies itself in THE MISSING LETTERS.

The Modern Era is a four-piece rock group formed in 2013 in Minneapolis, MN and they will be getting the night started right. The band is fronted by Jack Swagger, a charming twenty-something little brat that even Steven Tyler would say has too much energy. The backbone of the group lies in bassist Nick Pelowski and guitarist Ben Pelowski respectively, while drummer Bob Joslyn provides the heartbeat rhythm.