Minnesota is dubbed as the State of Hockey. That’s an undisputed title. Whether it be for the 10,000 lakes that freeze over every winter, creating thousands of convenient places to skate outside, or the tens of thousands of Minnesota residents that lace up the skates every year, it’s no secret that this state loves hockey. And while it’s pretty much understood that hockey is Minnesota’s “thing”, it seems as though fans are constantly going above and beyond proving why that’s true.

The 14th annual Hockey Day Minnesota took place at Parade Stadium in downtown Minneapolis this weekend, just outside of the Walker Sculpture Garden. Thursday night, the scene was perfectly set for the festivities. A glossy, freshly flooded rink in the foreground of the glowing Minneapolis skyline. Food trucks lined up. Log fire pits burning. Beer gardens propped up. And the steady flow of fans coming in to watch the Holy Angels vs. Minneapolis and Grand Rapids-Greenway vs. Blake girls’ high school hockey games. The girls started out the weekend with plenty of excitement, as Minneapolis defeated Academy of Holy Angels 3-2 in overtime in the first game and Blake defeated Grand Rapids-Greenway.

Friday night, nostalgia was the name of the game as Parade Stadium hosted the State of Hockey Women’s All Star Game and the NHL Alumni Game. Some of the most notable Women’s All Star players included Minnesota Golden Gophers star and USA Olympian Gigi Marvin, and Minnesota Whitecaps players Haylea Schmid, Allie Morse, and Allie Thunstrom. The NHL alumni team boasted an admirable roster as well, with Minnesota North Stars legend Mike Modano, Shjon Podein, Keith Ballard, Paul Martin, and Wes Walz all gearing up for the game. 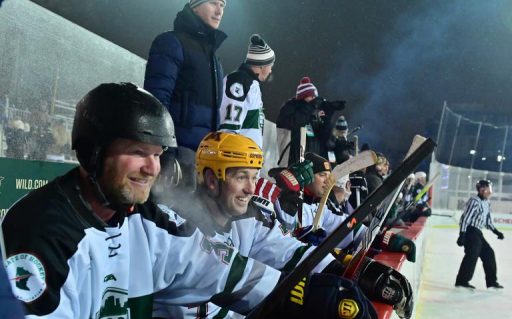 It was visible that the heavy snow accumulation and bad road conditions from the ill-timed winter storm took a toll on Friday nights attendance. Making the trek to be at these two games in person was not for the faint at heart. Those who couldn’t make it out to the rink had the option of enjoying a live stream of the game from the comfort of their own home. However, those who braved the storm were treated by getting to watch a handful of Minnesota hockey legends in person. Both games were a testament to some of the greatest Minnesota athletes the sport has seen. And while it may have been easy for the players to push themselves for the sake of competitive spirit, fun and enjoyment was the name of the game.

Saturday morning, the plows were out and the first puck drop of the day started early. The weather would not be a factor keeping fans from flocking into the arena today. Warroad vs. Minneapolis kicked off at 9:30am sharp as fans were welcomed to the stadium by a bone-chilling cold. Hockey moms and dads came armed with blankets, hand warmers, and warm beverages. While the warming house waited nearby, it was obvious that the family and friends couldn’t be in a dark hut watching their sons play, they had to be outside watching the game action up close. But if you didn’t have a hat, scarf, long johns and mittens, you weren’t going to last long. Although it was numbingly cold outside, fans laughed and remarked, “This truly is hockey weather!”

The temperature was reluctant to rise throughout the day as the city was boasting a -10ºF windchill during the Blaine vs Blake boys game. Even in the bitter cold, the enthusiasm was hot. It was fun watching the boys play out there, skating and grinding as if they were in their home rink. The excitement for them to play outside on Hockey Day Minnesota was apparent, as it was all smiles and focus for both teams. And if the game wasn’t fun enough, Nordy, the Minnesota Wild Mascot, was making his rounds fist bumping fans, trying to keep everyone’s blood moving while the game was going. Blake beat Blaine by a score of 3-2. 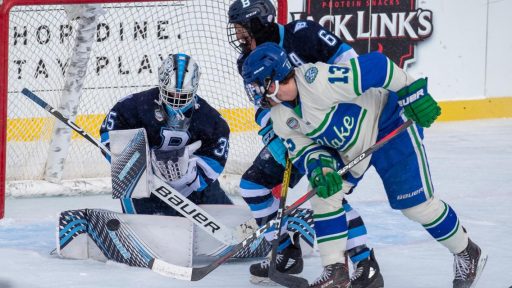 Between the games, fans had the options of grabbing a bite to eat, and checking out some of the booths including a silent auction, Hockey is For Everyone, WHAM women’s hockey association of Minnesota, UMN Women’s Hockey, Minnesota Special Hockey, and a photo-op the NCAA Men’s National Championship Trophy won by Minnesota Duluth last year.

The last event of the night was the University of Minnesota’s women’s hockey team taking on Ohio State. The Golden Gophers hit the ice in their famed maroon and gold jerseys as the fans bundled up in the stands cheered them on. As the sky grew dark, the backdrop of the Minneapolis skyline lit up with the golden glow of the Wells Fargo Center. The girls showed up ready to play and beat Ohio State in a tight 2-1 game. It was the perfect, victorious end to such a wonderful celebration of the State of Hockey. 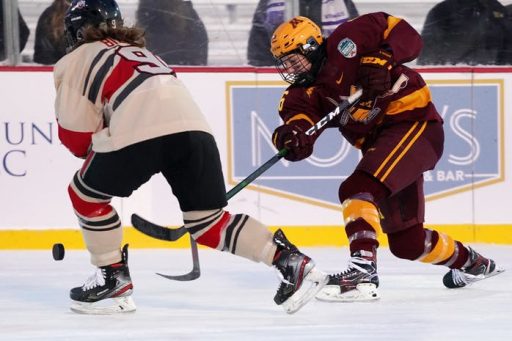 Carrie Underwood a native of Checotah, Oklahoma. American Idol season four winner hit the music scene with a splash. She has released four studio albums – Some Hearts, Carnival Ride, Play On, and Blown […]

While most of the Twin Cities was bracing for the impact of another extreme drop in temperature and the threat of a sizeable amount of snow, the youths of the cities made their way through […]

Gang of Youths Brings Everyone Together at The Entry