The leaves are changing colors and the air outside is getting brisk, which can only mean one thing. It’s time for sweaters, pumpkin carving and Oktoberfest. Oh, and great music of course! Sure enough, this weekend the spirit of Oktoberfest came alive in downtown Minneapolis as Surly Brewing Co. celebrated their 11th annual “SurlyFest” beer and music festival.

This particular SurlyFest lineup was a special one, as Minneapolis heavyweights The Hold Steady made their heavily anticipated return to the Twin Cities. It’s been four years since the band last played in Minnesota, so I considered this less of an Oktoberfest event and more of a homecoming celebration.

As I walked around the festival grounds, I was instantly greeted by the warm and comforting smells of Oktoberfest. The beer was flowing, the food was abundant, and a handful of people walking around were in their finest lederhosen despite it being a balmy 40º outside. There were attractions and vendors as far as the eye could see, so right away I was feeling pretty confident this night was going to be one for the books.

After grabbing one of Surly’s special Oktoberfest brews and some fried chicken tacos, I made it to the festival grounds just in time for Bad Bad Hats. Bad Bad Hats are a band I have heard a lot about, but I’ve never had the opportunity to see live, so I was excited to see what they had in store.

Immediately when they came out, they delighted the crowd with their songs. People began to sing and sway to as front-woman Kerry Alexander sweetly serenaded the crowd. They had a fun and charming demeanor on stage. They played some of their well known songs including “It Hurts”, “Midway”, “Joseph” and “Super America”. 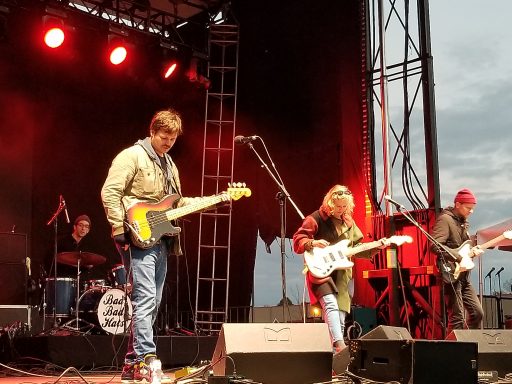 After Bad Bad Hats wrapped up, I eagerly moved closer to the stage and secured my spot for The Hold Steady. I truly felt a lot of anticipation for this show, because I know how much this band means to the Twin Cities music scene. The last (and only) time I saw The Hold Steady was in 2014 when they opened up for The Replacements at Midway Stadium. That night set the bar pretty high, and I knew this show was probably not going to be nearly as iconic or important as that one. However, I knew I was still in for a massive treat. This show was celebrating the 10th anniversary of The Hold Steady’s fourth album Stay Positive.

As it became dark and the temperature began to drop, there was a buzz among the crowd. The fans were ready. But before the band took the stage, Steve Fletcher, Minneapolis Councilman of Ward 3, came out and had a special announcement to make. He said, “The Hold Steady claim to be from New York but all their songs are about Minneapolis… With lines like, ‘City Center used to be the center of the scene. now City Center’s over. No one really goes there.’  They sing the songs that have become our scriptures.” With that said being said, Fletcher proudly proclaimed October 13th “Hold Steady Day.”

After patiently waiting and feeling chills from the declaration speech, the band came out and took the stage by storm. They opened their set with Boys and Girls in America hit, “Stuck Between Stations.” When the first notes of this song hit, I immediately felt a huge rush of excitement fill inside of me. Stuck is one of my favorite Hold Steady songs, and really set the pace and got me pumped for the rest of the set. With a fierce momentum, they then went into “The Swish” and “Sequestered in Memphis.”

Right off the bat, the crowd went off the hook. You could tell there was a major thirst for this band to come back to the Twin Cities. The audience was absolutely digging them. Front man Craig Finn sported a Minnesota Twins sticker on the side of his guitar, so you could tell he was stoked to be back. “Minneapolis, it’s been awhile” Finn reflected to the crowd before they went into beloved hit “Party Pit.” 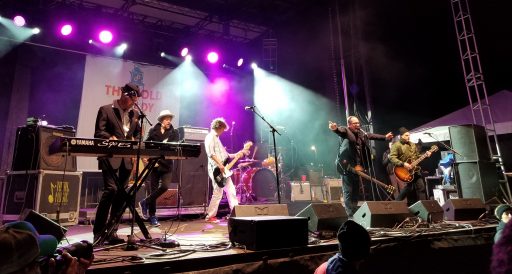 The energy of the band was phenomenal. Craig Finn is an electrifying front man who fills up the whole stage with his presence. His antics include jumping up and down, thrusting his body around, screaming the words, and of course, hoisting his arms up in the air letting the audience know he’s giving it everything he’s got. The Hold Steady are such a fun band to see live, and last night’s show reaffirmed that.

The rest of the band were an amazing team of musicians that kept up with the pace of Finn’s energy. The keyboard player, Franz Nicolay, danced and jumped around and arguably had just as much energy and charisma as Finn.

Later in the set, the band went into “Chips Ahoy”, “Your Little Hoodrat Friend”, “Massive Nights” and closed the main set with “Slapped Actress.” Everyone in the audience was on their feet, dancing and singing along. The fact that it was almost freezing outside did not deter the diehard Hold Steady fans from enjoying the energy and performance of their favorite band. Their encore consisted of “Hornets! Hornets!”, “Hurricane J”, “Stay Positive” and “Killer Parties.”

It’s been a long time since I had this much fun at a show. I felt a smile linger on my face the entire time the band was on the stage. I danced till I couldn’t feel my feet, and I sang till my throat was dry, and I left feeling an incredible amount of Twin Cities pride.

Overall, Oktoberfest is a celebration of life, happiness, and German culture, and that couldn’t happen without great eats and a sense of strong local community. So while the spirit of Oktoberfest is still here, raise a glass, smile, and cheer prost to our hometown heroes, The Hold Steady. 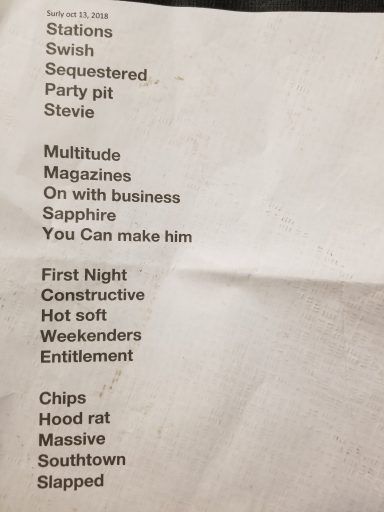 So this old guy goes to see Illenium at the Skyway……………

Disclaimer: This is not going to be our usual style of review since, well it wasn’t my usual kind of night. TCM was signed up to cover Illenium’s show at the Skyway Theatre Saturday night. I […]

North Carolina’s Delta Rae guitarist Ian Hölljes recently said in an interview “We’ve always been a band without a genre, an army without a country.” Well the band may not be easily nailed down as […]

Sunday’s show at First Avenue was a rather energetic way to close out the weekend. New Orleans band Mutemath was in town promoting their album “Vitals” Starting the show was Nashville’s Paper Route. They took […]