Switchfoot released their 11th studio album, Native Tongue, on January 18th and traveled to Bangladesh with Food For The Hungry.  Now they are on tour supporting the new album.  The Native Tongue Tour will be at the State Theatre in Minneapolis on Wednesday March 27th at 7:15pm.  Their special guests will be Colony House and Tyson Motsenbocker.  Many shows on the tour have been selling out but good seats still remain from $29.50 to $49.50.  You can select your exact seats HERE.

For a sample of what you could experience at a Switchfoot concert, check out the band’s new live video for “Native Tongue” released on March 8th. It was recorded during their recent concert at The Tabernacle in Atlanta.

“Love is our NATIVE TONGUE”

After 10 albums, multiple hit singles, millions of records sold, a GRAMMY Award and 20 years of touring, in late 2017, SWITCHFOOT put the brakes on. The successful release and tour for their most recent album, WHERE THE LIGHT SHINES THROUGH had concluded, and the San Diego-based quintet decided to take a long deserved, much needed hiatus. Their goals? To think on difficult, important questions about the band and themselves personally, including: “Why are we doing this?” The answers weren’t long in coming and are musically evident in the 14 remarkable songs that make up NATIVE TONGUE, a creative juggernaut spawned by singer Jon Foreman’s realization that the answer to “why?” was to “pursue joy.”

Joy became the paramount goal in his life and music.

“Joy is an incredible motivator,” says Jon: “It’s only to be found in the moment, not in the past or future. That’s what music is to us: The ever-present joy of the ever-present now.” During the hiatus, Jon’s positive immediacy inspired songs that he had to get out. Creative openness without a goal resulted in an electric, wide-ranging collection.

“There was no ‘should’ or ‘ought.’ It was a beautiful freedom. Songs we wrote didn’t have to turn into anything, as long as we were pursuing joy. That’s where this record was born.”

The results of that pursuit include the infectious, title track; the get-your-lighters out, sway-along “ALL I NEED”; and the edgy excellence of “VOICES.” Then there’s a trippily wonderful departure in the Beatles-esque “DIG NEW STREAMS,” a tune drummer Chad Butler calls an “odyssey. It breaks so many rules: Structure, tempo, arrangement, style. I love that.”

Lyrically, NATIVE TONGUE doesn’t dwell on the world’s fraught social and political situations, rather, it’s an answer that offers an antidote to them.

SWITCHFOOT observe that “we’re living in a time where it feels like hatred, fear, war, pain, anger is the native tongue of our species, that these dark words are our language. For me,” says Jon, “Holding my infant son in the middle of the night reminds me of how helpless we all start off. All of us, everywhere, were comforted, held, given a bottle; we were not hated into the world, we were loved into the world. Love is our native tongue, our common bond. And when fear and hatred are put in their proper place joy is available to us. That aligns well with joy, which is only available when fear, hatred, all those things are put in their proper place, cast aside by love.”

The time off for reflection “started a beautiful season for me, of falling in love with music and songwriting all over again,” says Tim, who co-founded SWITCHFOOT when he was just 17. “I’d sneak into the band studio and write and play. But then I noticed some scribbled lyrics left by my brother. He’d been doing the same thing.” Chad, too, admits to dropping by the studio. “I ran into Jon there. He played me a couple new songs, including ‘LET IT HAPPEN,’ which is poignant lyrically, coming from the space of not having a plan or agenda.”

Jon believes that where the songs arise from is crucial; “ulterior motives can ruin even the best of intentions.”

The idea of “let it happen,” along with “pursuing joy,” gave a shape to the lyrical ideas and music and spirit that went into NATIVE TONGUE. As SWITCHFOOT enjoyed the time off and, the avid surfers—reveled in the inspirational immensity of the Pacific Ocean—music flowed easily, merely for the joy of it. The band’s ‘time off’ turned out to be particularly creative and their prolific nature clicked in, writing nearly 100 songs for the project. The question arose: “Are we making an album?” The answer was clearly yes, and songs were culled to a manageable number to be produced by the band, along with OneRepublic bassist and multi-instrumentalist Brent Kutzle.

The tunes coalesced quickly. “THE HARDEST ART” got a beautiful boost thanks to vocals added by Kaela Sinclair, of the French electronic outfit M83. For his part, Tim got rid of equipment and bought “old basses, new to me,” to change up and challenge his sound and approach. Jon wrote lyrics that are an oft-philosophical combination and of the personal and universal. For example, “VOICES” was inspired by a homeless man who lived at the beach. “He was a nice guy,” says Jon, “who always wore aluminum foil on his head to block out the signals and voices he heard… Looking back I think he was bipolar. But I realized there’s always voices in our heads, all of us, an inner dialogue or diatribe.”

NATIVE TONGUE marks the 11th record since 1997’s debut, THE LEGEND OF CHIN, which started SWITCHFOOT on a path of critical and fan acclaim for albums including 2003’s multi-platinum breakthrough THE BEAUTIFUL LETDOWN, the GRAMMY award-winning HELLO HURRICANE (2009), and FADING WEST, which was also the name of a documentary on the band.

For an album that “snuck up on” SWITCHFOOT, there’s a remarkable cohesion among the songs.

Of course, 20 years together can do that to a band. A band that moves easily among the world of modern rock but mystifies those who try to pigeonhole them. “Since the beginning, SWITCHFOOT never fit into a musical genre,” notes Chad. “We all come from different musical upbringings, and we believe any good playlist has diversity.”

Approaching the music on NATIVE TONGUE with kid-like enthusiasm combined with the years spent honing their craft makes NATIVE TONGUE a rare gem. “We channeled Queen, ELO, the Kinks; our favorite albums from the past. Albums with guitar solos,” laughs Jon, who says, “I’d play solos over and over just because they were fun! But we didn’t want to make a throwback album, and Brent was great at marrying the sensibility of our roots with the present and beyond. We took fun risks.”

Those risks paid off in songs that the listener can interact with on multiple levels. If NATIVE TONGUE’s tunes are approachable and memorable, the album also has a heady goal. NATIVE TONGUE is, Jon says, ‘An attempt to be a loving embrace of all the human souls who have been weighed down by the times.

It’s a chance for all of us to be reminded of what brings us together, not what tears us apart. My hope, for this record,” Jon concludes, “is that it would be a reminder that there are new streams available for us to travel down, and that hatred is not our language, love is our native tongue.” 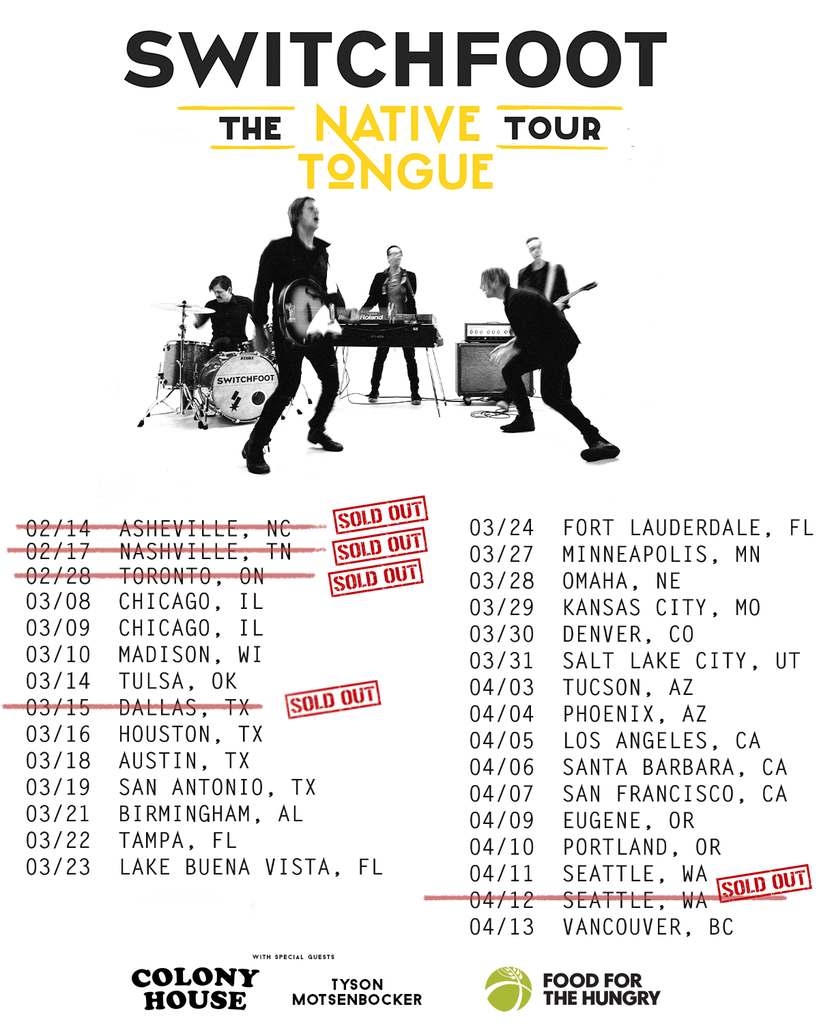 Powerhouses and blues legends, Buddy Guy & Mavis Staples have joined together for their “The Blues is Alive and Well Tour”. They will be performing at the Mystic Lake Showroom Sunday, February 24th at 8 pm. A […]

Photos by David Rubene So a horse and a unicorn walk into Lee’s Liquor Lounge on a Friday night… No, that’s not a joke, that’s seriously what happened Friday night. Friday night was a celebration […]

Jumping Into The Unknown Pays Off Thanks To Greyson Chance

I’m a risk taker when it comes to my weekday shows. I really don’t care what I see or if I know it prior to going, I just want– no, need– a show every day […]