Skating Polly brought their seemingly addicting performance to First Avenue 7th Street Entry on Wednesday night. One spin there albums and you will clearly understand their music easily sticks with you. It seems that I’m not the only one. I believe every iconic punker that sees them live seems to want to be a part of building their legend, including front-woman of X, Exene Cervenka and and even L7. 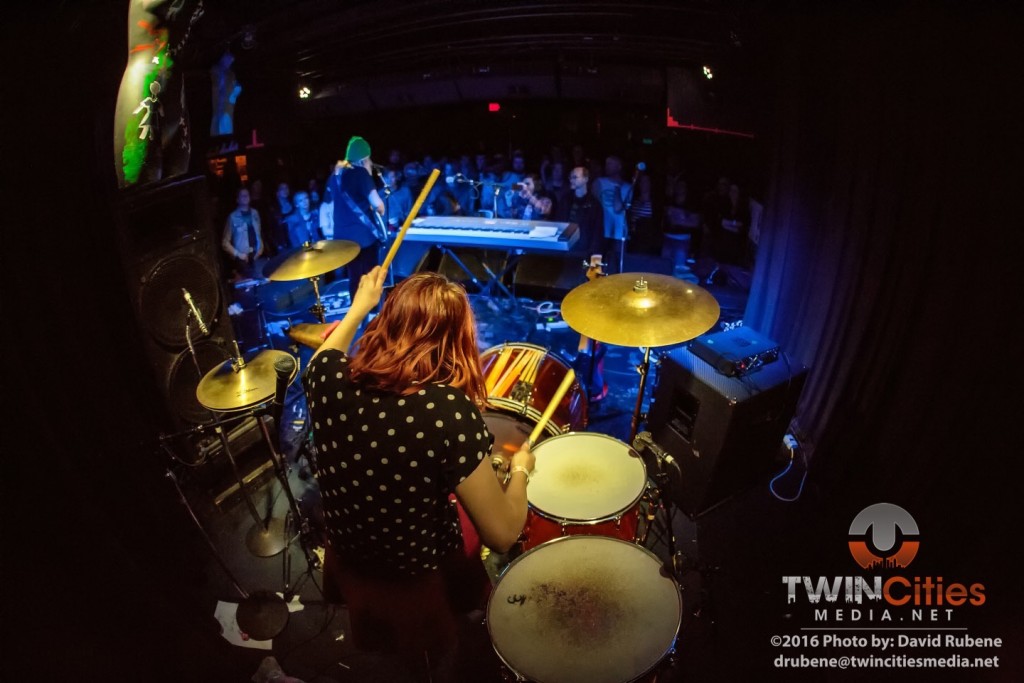 The night’s lineup kicked off with local favorite Bruise Violet. Though minus Bella (bass), Emily (guitar/vocals) and Danielle (drums/vocals) were on top of their game. They hit their set strong and in true form, didn’t let up until the set was complete.

The momentum continued with the high-energy sound of Cherry Cola. Frontman Max Timander (guitar/vocals) was on fire. With a style clearly reminiscent of the Ramones, later Pixies, and early Weezer, their delivery and stage presence was spot on and very impressive.

With a brief pause in all the action, the crowd was ready for more hard-hitting music. Next up was Catbath. Based out of Minneapolis, Catbath quickly took control of the crowd and got them into a frenzy. Catbath’s purring harmonies, roaring screams and hissing fuzz and feedback, are as fresh and bracing to the ears as a rough cat’s tongue to the cheek.With a great, solid set, Catbath could have easily played longer as crowd seemingly wanted more.

With everyone completely worked up, it was time for Skating Polly to hit the stage. The one thing that is definite about Skating Polly’s style and musics is that the duo walk the line between total originality and something completely familiar. It’s no wonder Riot Grrrl parallels are drawn when discussing Skating Polly and it’s no accident that bands like Babes in Toyland and L7 want the young ladies opening their shows. Even though Kelli Mayo and Peyton Bighorse weren’t even born yet when the classic L7 lineup broke up 18 years ago, songs like Ugly summon the same type of fury and empowerment which insisted on Girls to the Front, so many years ago. They call their brand of music “a little bit musically schizophrenic”. Skating Polly charged through their set with house pack. No matter which sister is at the front singing her songs, the authenticity is overwhelming. Peyton is an extremely strong drummer and when Kelli picks up her 3 string bass and bellows her melodies into the microphone, it’s hard not to be swept away, whether you’re an adolescent girl or a man in his late 40’s with a bit of salt and pepper in his hair (well … hair that is still around). Their set was pretty damn incredible and their performance was deeply impressive.

Though fall is quickly approaching here in the Twin Cities, there are still a few nights left like this past Friday. The weather was warm, there was a summerlike breeze in the air, the Twins […]

The Carnegies Video Release Show November 28th At The Entry

The Carnegies will be celebrating the video release of “In The Night” the first track recorded by the band since Danny Mars replaced young guitar phenom Owen Hiber. Twin brothers Royce and Roman Mars front […]