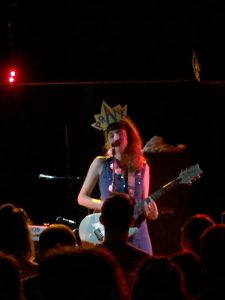 Lisa Prank was the first act to take the stage Thursday night at The 7th Street Entry. Lisa is a quirky solo act with simple songs about falling in love and the inevitable heartbreak that follows. I must say, I completely envy people like Lisa who can get on stage with a drum machine and guitar and just do their thing. Although she seemed a bit unsure of herself at times, she looked like she was having fun and, in turn, the crowd seemed to truly enjoy her short and sweet set. 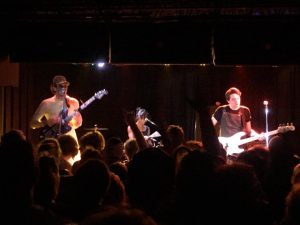 Next up was Bellows. The music that happened during Bellows’ set was nothing short of beautiful. Their set was relaxed but not sloppy and still full of energy and their endearing songs were full of dynamics. I loved how each song was like a roller coaster. It kept me on my toes and kept me interested. Their set seemed to pass by all too fast and I found myself truly getting lost in their world during the time they spent on stage which is all I can ask for in a set from a band I’ve never heard of before.

After being completely blown away by Bellows, it was time for the headlining act. I had seen PWR BTTM back in April when they opened for Ra Ra Riot at The Triple Rock. I completely fell in love with their fun music, quirky personalities, and hilarious banter. The minute I saw that they were headlining a show at 7th Street Entry, I was more than happy for them. During the couple of minutes before they took the stage I scanned the crowd and realized I was in a completely sold out crowd, I wanted to cry… These guys were getting the recognition they deserved and it made me more than ecstatic. 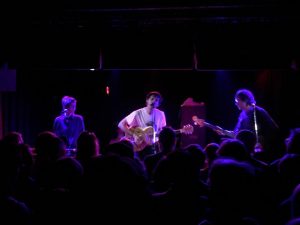 The queercore/ pop trio seemed truly surprised by the turn out. They second they took the stage, the hilarious banter between the band and crowd began. They started off by making sure people were at the right show with announcing that they were not Coldplay. I think they genuinely were worried that people were at the wrong show, but that wasn’t the case at all.

These guys more than deserved the sold out crowd they got last night. They were more than deserving of the hundreds of people that were dancing and singing along to their songs. They were more than deserving of all of the attention they were getting last night because they are truly just a great band with a great stance on life. They don’t care who the hell you are, as long as you’r having fun. They don’t care if you are a man dressing as a woman, a woman dressing as a man, or a little bit of both. They don’t care if you’re bi, trans, queer, gay, lesbian, or anything else. They just care that you are having a good time and you’re able to be yourself, if only for the small amount of time you’re at their show.

2929 is a band that truly exemplifies the reason why I love live music so much. The trio took the stage wearing dressing and make-up. They were unapologetic as they sang through song after song with lyrics that would make a conservative mother cringe. Some of the things they say in-between songs teeter on the edge of making you feel uncomfortable but never cross the line. They aren’t afraid to speak their minds and explain that they feel people should be able to be whatever, or whoever, they want but, at the same time, it doesn’t feel preachy. They are who they are and they just want you to be who you are. Kurt Cobain said it best, “Come as you are.” and that’s exactly what these guys do.

The line-up of Friday night’s Frank Turner show was something I couldn’t have even created in my wildest dreams. With a new favorite band, a band that has taken over my daily playlist, an old […]

Barns Courtney Launches 404 Tour In Minneapolis At The Fine Line

With Barns Courtney’s new album, 404, set to be released on September 6th, Minneapolis was the privileged host for opening night of the 404 Tour. The Fine Line was as full as I’ve seen it, […]