Haunts, frights, and ghouls alike were alive last night as New Jersey based singer-songwriter Michale Graves rocked a packed Uptown VFW with his supporting rock band. Graves, best known as the Misfits frontman between 1995-2000, recorded two full-length albums with the horror punk legends before his departure from the band. While Graves may no longer be an official member of the Misfits, he hasn’t stopped bringing the spooky madness to the masses throughout the years, playing his beloved hits from his days in the band, as well as his original material.

Last night’s show in Minneapolis was a special one, as Graves not only played his hit Misfits songs like usual, but played the entirety of both American Psycho and Famous Monsters straight through from front to back with his band. This double album show brought in passionate Graves and Misfits fans from all across the state, as I overheard one couple mention they had driven four hours from Thief River Falls to be at the show that night.

While I only trekked a mere 15 minutes to the Uptown VFW, it’s safe to say that I was feeling some of the hype myself. I was a late bloomer to the Misfits, and the Graves era sucked me in, made me a fan, and was the gateway to the rest of the band’s discography. I have Famous Monsters to thank for being the spark that ignited my love for the Misfits, and I was pumped to see the album played in its entirety by one of the original songwriters himself. 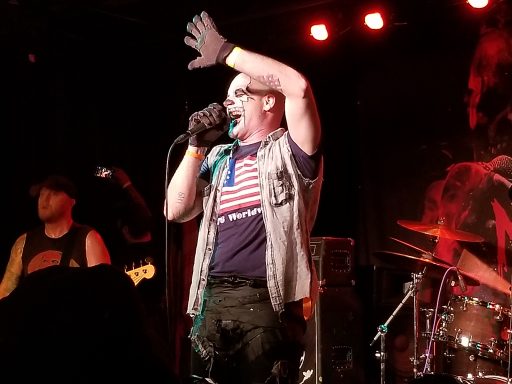 I quickly made myself comfortable in the crowd, trying to get as close to the stage as I could so I could fully immerse myself in the action. As the lights went dim, everyone cheered in anticipation. Graves could be seen lurking behind the stage as the rest of the band began hammering on their guitars and drums opening the set. At the start of the show, Graves grimly shuffled across the stage to the sound of roaring applause and claps, fist bumping those at the front of the stage. He smirked at the audience and gave a commanding look into the crowd with his dark, piercing eyes before kicking off into the first tracks of American Psycho. Sporting full skeleton face paint and a black top hat, Graves danced around the stage, locking himself into position to blow through the first album’s set.

The pace picked up quick, as the second song of the set was the album’s namesake and recognizable hit, “American Psycho.” The audience lit up, and started screaming and dancing along with Graves. The overall energy of the crowd was insane, as a mosh pit immediately opened up and bodies started flying all around the VFW’s old wooden floors. The moshing and dancing continued all throughout the set, as Graves whisked everyone away into his world of monstery fun.

While the moshing and head banging from the crowd was a sight to see, Graves was also incredibly charismatic and fun to watch on stage. Graves kept on his toes the entire night, walking around the stage, shaking his head and getting down close and personal with the audience. He seamlessly showcased his abilities as a stunning, high energy front man along with everyone else in the band. I was also particularly impressed with the bassist, who hammered away like a madman, jumping in the air and yanking his bass back in forth.

When the band went into “Dig Up Her Bones”, the audience exploded and the pit opened up even wider. So many passionate fans screaming the words back at Graves. It was a special moment to see. There were numerous times where the crowd was louder than Graves chanting the chorus, “Point me to the sky above, I can’t get there on my own… Walk me to the graveyard, dig up her boneeeeessss!”

After Graves and the band finished playing American Psycho in its entirety, they played the entirety of one of my favorite Misfits records, Famous Monsters. This was incredibly fun to watch, as you could feel the excitement and passion Graves still has preforming these songs. The rest of his band delivered as well, singing along and getting the audience involved, especially with the “wooooah, oh ohs!” of “Scream!”. My favorite moment of the night was when “Scream!” rolled right into Graves’ ballad “Saturday Night.” Two songs that are iconic in the Misfits catalogue, played back to back. Once again, the crowd lit up and had a blast knocking each other around singing along to the songs. I could tell by this point in the night, the band were really in the pocket feeling their groove. Graves continued to sing and dance with the crowd and seemed almost mesmerized by the music as he closed his eyes and sank into the songs.

It’s safe to say by the end of the night, the Uptown VFW was officially rocked by an incredibly fun Michale Graves show. It’s great to see the passion and fun Graves continues to exhibit in his performances, and he even hinted that he would be coming back to Minneapolis in spring with an acoustic guitar. Great Misfits songs tend to age like a fine wine – only getting better as they are shared with more and more people across multiple generations of fans. And that’s what Graves has managed to do. Keep the music alive. 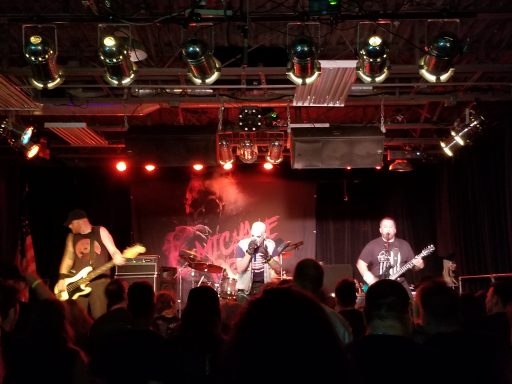 I used to be too cool to listen to Avril Lavigne. Honestly, I didn’t want to be a poser and, by having that mentality, I realize that that’s exactly what I was back when I […]

Weekday shows can be a tough get. Bands face the battle of trying to coax people who have to work early the next day out of their homes and onto the floor of a venue. […]

Just months after a group of musicians came together, TCM covered The Plott Hounds at the Myth in 2014 as they hit the stage opening for Chris Hawkey. We have had the pleasure of covering some […]