Enigmatic multi-platinum recording icon Prince has announced a GALA EVENT set for January 21st at his historic Paisley Park recording complex in Chanhassen, MN.  The exclusive performance will feature the celebrated composer, performer and multi-instrumentalist in an especially intimate setting – solo with merely a piano and a microphone.  The format will allow fans to experience a more direct one-to-one connection with Prince.  The minimalist concept was originally planned to debut at Konzerthaus in Vienna, Austria late last year, however dates were postponed following sky-rocketing resell prices on secondary ticketing outlets even prior to the official on-sale date.  In a stance against ticket-touts, the icon inverted and reimagined the concept, announcing plans for an exclusive residency at his very own Paisley Park. 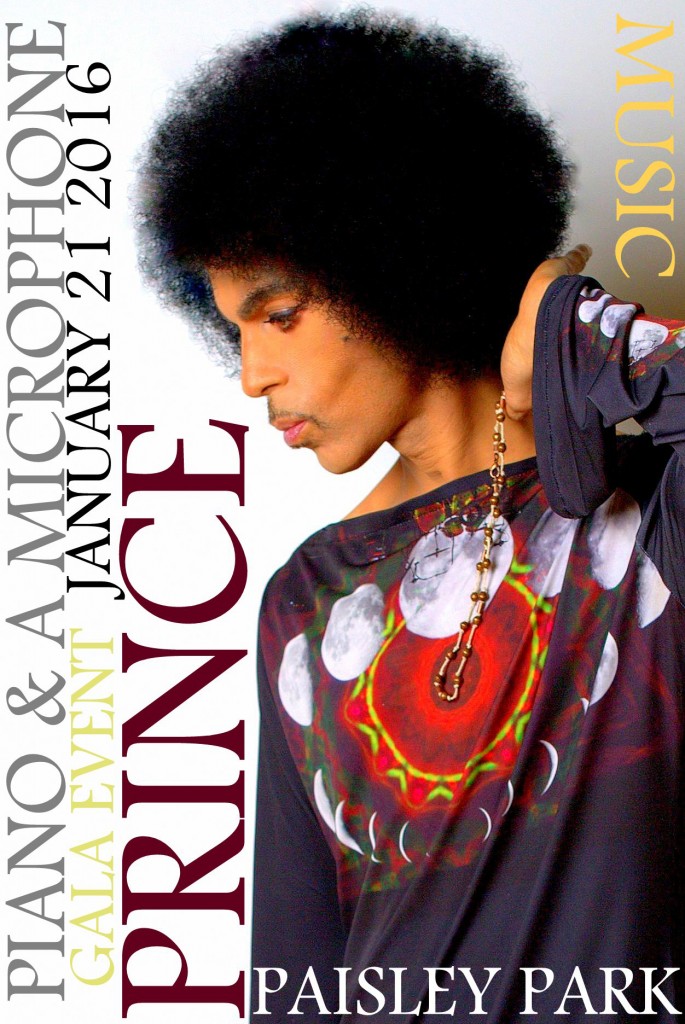 Tickets to this upcoming event will offer Prince fans globally an opportunity to join in the experience by purchasing tickets ahead of time at paisleyparkafterdark.com.

Ticket went on sale today at 12PM and rapidly SOLD OUT.  For those lucky enough to attend, everything about these exclusive solo performances has been carefully considered to deliver special once-in-a-lifetime experiences.  The repertoire list will be culled from Prince’s vast 39-album catalogue and each performance will have a unique set-list that evolves in real time song-to-song.  Fans should expect to witness special interpretations of well-known hits, alongside rarely performed B-sides and new never-before-heard material.

In speaking about why he has decided to undertake the minimalist solo concept, Prince has stated: “For several reasons.  For starters it is a challenge.  You have to try new things.  With the piano it is more naked, more pure.  You can see exactly what you get”.  Indeed, these intimate solo concerts will stand in sharp contrast to the critically acclaimed and incendiary HITNRUN performances Prince delivered with funk-rock band 3RDEYEGIRL through recent years.  Befitting to the concept of seeing Prince perform solo at a piano, careful consideration has been given to the environment and the acoustics at Paisley Park to ensure an entirely unique, intimate and special concert experience.

Prince has sold in excess of 100 million records worldwide.  In addition to collecting seven Grammy Awards, a Golden Globe and an Academy Award for Purple Rain, he was inducted into the Rock and Roll Hall of Fame in 2004 – the first year of his eligibility.

The icon has remained as prolific as ever, having released four albums in the last sixteen months, the chart-topping ART OFFICIAL AGE (#1 R&B), PLECTRUMELECTRUM (#1 Rock) and most recently HITnRUN Phase One, released initially in exclusive partnership with TIDAL on September 7, 2015, and HITnRUN Phase Two, released in partnership with TIDAL on December 12th, 2015.
Information provided through an official press release

So how does one review a burlesque show? Should I focus on the dancing skills of the performers? Their appearance? The degree of nudity? Then I remembered something that Missy Suicide mentioned in our interview […]

It has been years since I’ve had a chance to see The Gaslight Anthem. There’s something about that band that, no matter what mood I’m in, they have a song to fit it. It’s the […]

Colorado Folk band Elephant Revival just released their album “Petals” and their tour promoting it stopped at the Cedar yesterday. Starting the night was Wisconsin’s Dead Horses who are a frequent guest in the Twin […]