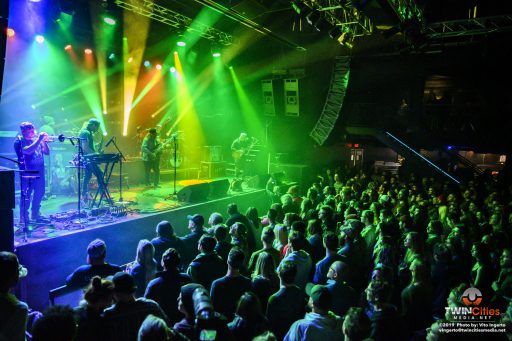 Lettuce are the gumbo of music, many ingredients but no real set recipe. Chunks of funk, R&B, hip hop, jazz, soul and psychedelic jam simmer together into a unique essence that is never the same whenever the ingredients are combined again. The gumbo was served up hot and heavenly on Friday night in the Mainroom at First Avenue. Lettuce are out supporting their latest release Elevate.

First up in the packed Mainroom were Dallas based, percussion heavy, funky hip hop band Ghost Note.  With  2 drummers, rhythms were the main course of this set. There were two sax players too, and one of them had their horn hooked up to a wah wah pedal, which made for a very unique sound. The band had the room grooving big time, with a sound reminiscent of Prince’s Madhouse, kind of like future funk. “So dope, so dope!” was what I kept hearing from the crowd.

Lettuce came on right around 10:30 to an animated audience which was a diverse mix of grey hair, dreads, tie dye and piercings. Playing with the ease of a band that is performing in front of intimate friends, bassist Jesus Coomes flashed a huge smile and a couple of peace signs as drummer Adam Deitch began to lay down the filthy beat foundation that the night’s funk fun house would be built on.

The bands performance was more free form poetry than traditional concert. One song just seemed to blend organically into another, like the paisley pattern of a Dead dancer’s dress. The horn section, consisting of Eric Bloom and Ryan Zoidis were tighter than two coats of paint, arrangements meshed cleverly with each change of tempo. The light show was like a wave of dayglow colors that washed over the audience, making them appear to be part of a Peter Max painting.

The weird, the wild and the trippy little bits were all thrown into the gumbo pot that was First Ave. It made for a dish that was sure to nourish the soul on a cold Saturday night.

A First Look At The Fillmore – Minneapolis

Renderings courtesy of The Fillmore “Zwei Seelen wohnen, ach! in meiner Brust” this quote from the German poet Johann Goethe summed up my feelings before the press event for the new Fillmore Minneapolis.  On one […]