As Spring is clearly in the air, there is nothing better than midweek concerts in downtown Minneapolis. The Neu Industrial band Filter made a stop at Mill City Nights for an evening of intense, in your face performance. If you know anything about Filter’s frontman and creative mastermind Richard Patrick it’s that he prides himself on being unconventional and unfettered by the shackles of trends, formula’s and especially other people’s expectations for his music. 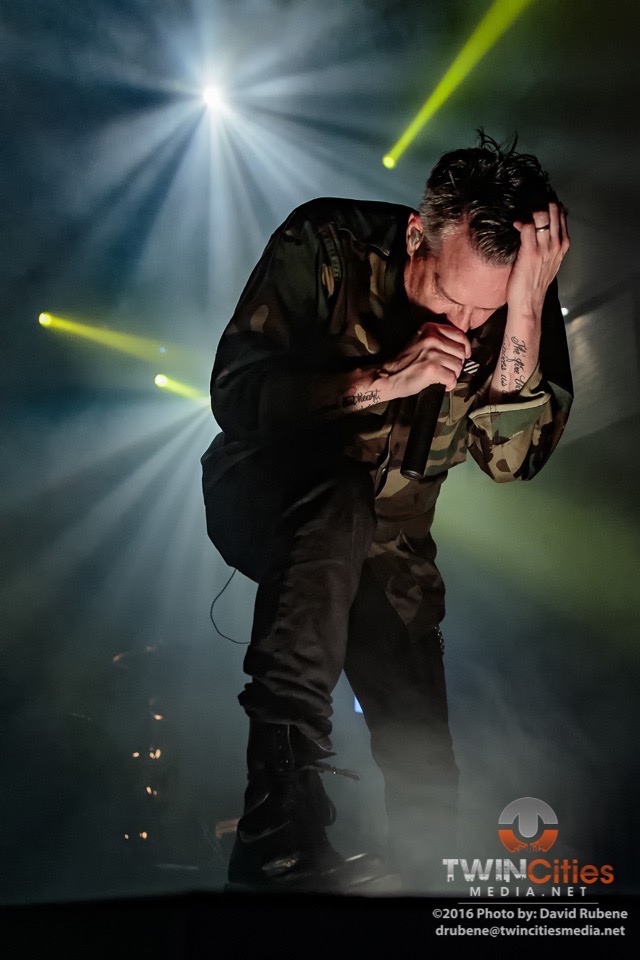 In a sense, the name Filter is not so much the name of the band (or brand) but how he sees the world around him and interprets it through his remarkably bold, penetratingly incisive and sometimes disturbingly honest music. This is evidenced by the fact that the group that appears with him on record and on stage has seen a cascading cavalcade of members – but Patrick’s artistic intensity, and his voracious sense of independence have always been constant. This clearly shines through with Filter’s most profound album that was released earlier this year, Crazy Eyes.

The onstage antics and supporting light show behind them was pretty intense. With Patrick center stage, at times on a specially designed lightbox, the lights and effects added to his powerful presence. With new songs Welcome to the Suck (Destiny Not Luck) and Mother E, the crowd was entranced throughout the show.

Watching Filter perform was a revelation. One definitely has more of an appreciation for their live act after witnessing the band in person. They were genuinely appreciative of the praise from Minneapolis’ Filter faithful. Patrick and company delivered a solid performance, coming off as a band that could have played to a larger audience, however they kept it person by reciprocating their love back to the crowd both on and off mic.

Suzie Record Release at The Icehouse

It was a busy weekend for music and events in the Twin Cities, but one stand out event was Minneapolis’ own Suzie Record Release Show at The Icehouse. Late last month Suzie released their second […]

Saturday night brought 3 great artists to the Varsity. In the aftermath of the beating the Gophers took some upbeat music seemed just the right remedy. The evening also featured a couple of local non-profits […]