The daily band lineup has been announced for the second annual Northern Invasion, Saturday, May 14 and Sunday, May 15 at Somerset Amphitheater in Somerset, WI, just outside the Twin Cities. Northern Invasion will feature the biggest names in rock on three stages with expanded campgrounds. After quickly selling out its inaugural year with 25,000 fans in attendance, Northern Invasion expands to two full days in 2016. 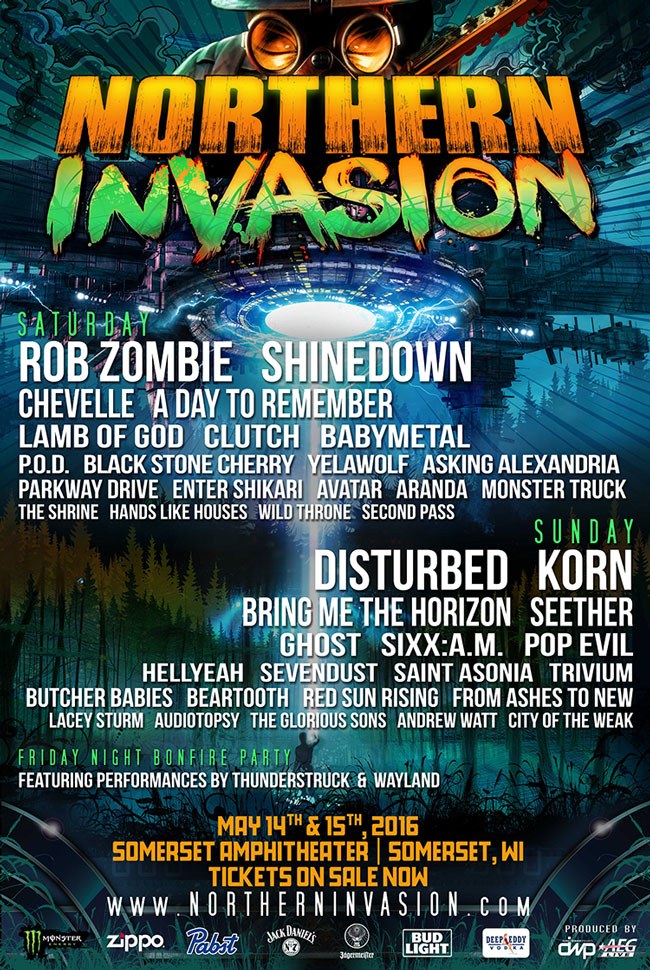 Single day tickets for Northern Invasion go on sale Wednesday, April 20 at 10:00 AM Central Time for $99 (plus fees).

The daily band lineup for Northern Invasion is as follows (subject to change):

In addition, those who purchase camping packages and VIP Upgrades will have access to the Northern Invasion Friday Night Bonfire Pre-Party with performances from Thunderstruck (tribute to AC/DC) and Wayland.

The Northern Invasion Camping area will be open from Friday, May 13 at 12:00 PM CT through Monday, May 16 at 12:00 PM CT. Camping packages are sold for spaces on-site as well as adjacent to Somerset Amphitheater on the Float Rite grounds.

Northern Invasion is supported by great corporate partners including Bud Light, f.y.e., Jack Daniel’s, Monster Energy, Pabst Brewing Company and Zippo Encore. These partners, along with many others, will feature interactive experiences, artist meet & greets, and other unique fan engagement opportunities throughout the festival.

Coldplay brought their Head Full of Dreams Tour to Minneapolis’ U.S. Bank Stadium for a colorful evening of music, larger than life special effects and a heartfelt message of connectedness and positivity. The world-famous four-piece […]

Photos by David Rubene   Gallagher, Ned Flanders, a Mariachi singer, and Ronald McDonald walk into First Avenue… Sounds like the beginning of the weirdest joke you’ve ever heard right? Well, that was literally how […]