Beat Connection have been described as “Seattle’s electro-pop golden boys”. Founded in 2010 the group consists of Reed Juenger, Tom Eddy, Jarred Katz, and Mark Hunter. Their 2012 debut album “The Palace Garden” led all over the US and Europe. They are currently working on their sophomore album due out this year. Beat Connection is currently touring with Django Django and traveled with them from Lollapalooza to play at First Avenue.

Their set was upbeat with almost euphoric high lights and strong beats. By the end of their 45 minute set any audience member who did not know about them had at least one of their catchy songs stuck in their head. I look forward to them returning with their new album for a longer set.

Check them out on Soundcloud 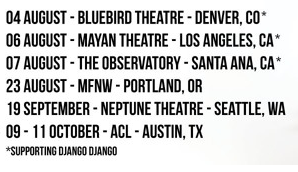 Open Mike Eagle And Friends Bring A Whole Lot Of Emotion, Passion And Laughs To Nearly Sold Out Turf Club

Well, we made it through the week. Not going to lie, it was a tough one and I felt such a sense of relief as I walked into The Turf Club knowing I was not […]

Wednesday night at the State Theater was a night full of nostalgia for everyone but more importantly for Canadian singer K.D. Lang. This year marks the 25th Anniversary of Ingénue. K.D.’s sophomore album Ingénue from […]

Iconic hard-rock band Guns N’ Roses are playing at the Xcel Center on September 21 at 7pm!  The concert tickets start at $46 which can be found on the band’s website or Tickemaster.  Pick out […]