Django Django an UK 4 piece art rock band just released their 2nd Album “Born under Saturn” in May. They are currently on tour supporting it. I first noticed them when heir single “First Light” started to get airplay on the Current.

Fresh off a performance of Lollapalooza, the band is spending a couple of days in the Twin Cities. To get acclimated to Minnesota, they watched one of our professional sports teams (the Twins if you care) loose. Singer Vincent Neff asked the audience for bar recommendations during the show, so keep your eyes open. 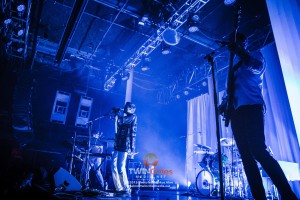 The band took the stage bathed in blue light and kicked off with “Hail Pop” after a brief Intro. As a warning: First Avenue just got brand new lights after 20 years and photographers can babble on and on about light. My apologies if I ramble. By the time Django Django got to “First Light” fans were fully in the groove and dancing. Combining the band’s lights with the house lights, the sun rose slowly at First Avenue. It was a truly spectacular effect that a camera cannot begin to capture. A spinning flat reflector was used for other songs to create a pyramid of light. 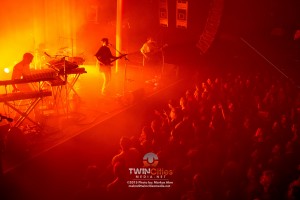 The Varsity Gets Freaky With The Claypool Lennon Delirium Thursday Night

The Claypool Lennon Delirium brought their psychedelic rock to the Varsity Theater on Thursday night. Consisting of bass savant and Primus founder Les Claypool and Sean Lennon, son of John Lennon and Yoko Ono, this […]

Do you read our coverage of all of the local metal music that goes on in the Twin Cities and find yourself wondering how you can jump on in? Well, wonder no more. On Saturday, […]

With the talk of snow filling the remainder of the weekend, the energy at Matt Nathanson’s sold out acoustic show on Friday night was incredible. I think many of us are ready for the snow […]