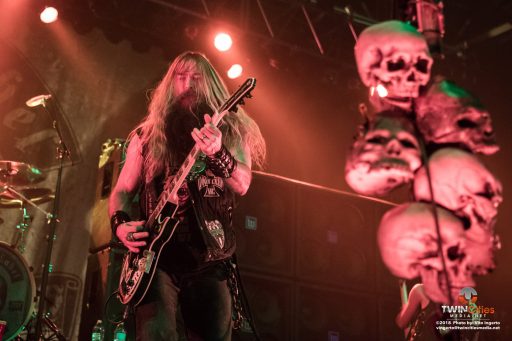 Stock up on Tylenol, you’ll need it from all the head banging that will happen when Anthrax and Black Label Society invade the Fillmore Minneapolis on Saturday, August 6th. The two co-headliners will be joined by Hatebreed. Catch Zakk before he joins Pantera this fall!

TV has soap operas, literature has Shakespeare, and metal – well, metal has Anthrax, that fire-breathing, thrash-spitting, multi-headed beast of a band that – 30 years since the day Scott Ian and then-bassist Danny Lilker searched a biology textbook for the disease that would become their moniker – smiles back at you with a monstrous, upturned middle finger and refuses to fucking die. But then, if you have an inkling about heavy metal, you’ll have heard of their meteoric rise in the ’80s alongside the likes of Slayer, Megadeth, and a little band that once crashed on Anthrax’s studio floor known as Metallica.

Ozzy Osbourne and Slipknot’s Corey Taylor have combined their metal festivals into a single massive weekend metal event to be held this fall. This new monstrosity of a metal festival is called Ozzfest Meets Knotfest and […]

The festival names ‘Ozzfest’ and ‘Knotfest’ can only spark one thought … a solid day of non-stop metal. But this year, the unthinkable became reality the weekend of September 24th. The two-day festival combined the […]

Like an invading hoard of Viking warriors, Black Label Society descended on a frigid Myth Live and left nothing but smoldering ruins in their path. The band, on the “Tour O Doom”, are out supporting […]