Walk Off The Earth is a musical group I had never heard of before until a good friend asked if I could cover the concert and attend with her. After a quick study, listening to their CDs and watching some of the group’s videos, I was instantly hooked. With their energy, positivity, creativeness, and pure enjoyment of music it is clear why they have such a strong and growing following. I was so sorry to learn of their recent loss of bandmate, Mike “Beard Guy” Taylor. However, I looked forward to the tribute the band is making to him during all shows on their worldwide tour. The band is now a just a foursome, comprised of the married couple, Sarah Blackwood and Gianni Nicassio, along with Ryan Marshall, and Joel Cassady. Additional touring musicians are key players in their shows.

We arrived at the Myth Live shortly before 8pm showtime. After attending an outdoor show the night before, we were happy to be indoors tonight, especially with the dropping temps and certain rain. Everyone was handed a blue paper heart upon entering the venue with instructions to use it during part of the tribute. The Myth was quite full already on the lower level, with the upper level closed off except for the suites.

Gabriela Bee, the 12-year-old daughter in the popular Canadian internet family known as the Eh Bee Family, was the opening act. Her family posts weekly family friendly videos on their YouTube, Vine, and Instagram channels and have over 20 million followers and billions of views. Young Gabriela has posted a number of music videos including some with the help of Walk Off The Earth (WOTE). Now she’s on tour as the opening act, demonstrating composure and ability far beyond her years. As far as first impressions go, the youngster instantly won me over with the Minnesota North Stars jersey she was wearing, with a white Gabriela beanie pulled over her dyed-blue hair. She sang mostly cover tunes, starting with “The Final Countdown” by Europe and then “High Hopes” by Panic at the Disco. A drummer and guitarist from WOTE’s touring band supported her, along with recorded music. Her third song was an original called “Something More” which was impressive for a young performer. As her set progressed she appeared even more comfortable in front of the large crowd.

The young singer is known as Miss Bee or Miss Monkey on their family sites, but tonight she had a gorilla with a yellow “Gabriela Bee” t-shirt waiting on her, delivering props, instruments, and even tropical drinks to her. She grabbed a ukulele for the next song, a wonderful cover of Grace VanderWall’s “Beautiful Thing”. She said she just wrote the next song with WOTE, but when the song was clearly “Tequila”, we learned she was teasing. Later she took a selfie with the crowd before the gorilla helped her shoot off a confetti party popper from her limited special effects budget. Gabriela finished her set with a cover of The Beatles “Ob-La-Di, Ob-La-Da” that she sang while reclining on the stage. Before departing the stage, she shouted, “I love you Minnesota!” I think the feeling was mutual.

During the stage change-over, Jeremy Willet from ChildFund International spoke to the crowd about his travels to impoverished nations in desperate need of clean drinking water and how concert-goers could sponsor a child in need for only $36 per month. If they did so tonight, they would receive a free gift from Walk Off The Earth. This appeared to entice many to make the pledge. Jeremy has helped raise over $50 million charitable dollars by finding sponsors for over 30,000 children and mobilizing over one million meals for international school-feeding programs.

To start the show, the Canadian band was shown on the video screen, backstage, getting ready for the show. They were taking time to answer a few fan questions and Sarah was seen practicing uku-yoga, balancing about seven ukuleles to a yoga pose. A phone call from the band’s agent caused the ukulele’s to come crashing down and a few choice words from Sarah. Discovering they were in the wrong city for tonight’s show, they took off in a red car on a high-speed car chase (complete with decoy cars and all) to get to the Twin Cities on time. We saw them arrive, close the wardrobe door behind them, and next thing they were walking out on stage. The stage was loaded with various percussion instruments and musical gadgets that they would make use of tonight. Mike “Beard Guy” Taylor’s keyboard stood vacant and adorned with candles, and would remain that way this evening.

“Fire in My Soul” was the opening song and the band immediately showed the energy and fun they are all about. Sarah raised up a signed ukulele and told the crowd that they would be giving it away tonight to the craziest fan, so we better get busy and dance. They asked the crowd to sing along to “Fifth Avenue” and followed with a blast of party confetti. Along with their originals, the band is also famous for their fun versions of cover tunes like OutKast’s “Hey Ya!” which began with Gianni playing the electric bass with a bow and ended with kazoos. During “Alright”, Sarah made sure to wave to every young fan she spotted in the audience. Something they will each remember. Gianni graciously thanked fans for the gifts they left for them including the tray of brownies with his name on it. Sarah warned about what happened the last time he got a tray of brownies. Later we would learn this was just setting up some future hijinks.

Fans really got into the rocking cover of “Teenage Dirtbag” and its loud finishing chorus. After that, the four band members stood on the upper platform for a mash up of about ten songs starting with Gotye’s “Somebody That I Used to Know”. When they could not find Gianni, Ryan was sent to look for him backstage and the video board showed Ryan discovering him, groggy under a near-empty tray of brownies. After the rest of the band went to help retrieve him, Sarah decided to start off the next song by herself on her ukulele. With it being “Taekwondo”, the band returned to save Sarah from a masked intruder and she later also fought him off in some staged fighting.

Gabriela Bee returned to the stage to join the band for the cover of the Jonas Blue song “Rise” for the song she recorded a video performance with Sarah and Gianni. “Rise” truly took the show up a notch and got the audience jumping, then swaying hands. At the end, Sarah and Gabriela pounded smoke-filled bass drums which sent puffs of smoke bellowing into the crowd. Ryan told us that Minneapolis and St. Paul have always supported the band so well. In fact they played one of their first full-fledged US concerts in the Twin Cities. The radio station has supported us well and they would always come back. He then asked if we would like to hear a new unreleased song. He got the obvious answer back from the crowd. Yes, we would love to hear the song they wrote to honor Beard Guy, called “Mike’s Song.” This was just the first step tonight that the band would take in honoring their bandmate.

Sarah next ventured into the crowd for the first part of “Home We’ll Go” before joining the band onstage to play acoustic guitar. After the song, she took a short video of the crowd going crazy to post online so other fans could see how we party in the Twin Cities. I’m sure you’ve probably seen the band’s special stringed instrument they call the world’s first “GuitHarpUlele.” They played it for their cover of Maroon 5’s “Girls Like You” with the four members all strumming different parts of the instrument. Everyone exited the stage as it turned red. The band returned to the front of the stage for a special drum performance using a wide variety of drums and percussion instruments. Sarah would transition this by dinging a few simple notes on her handheld xylophone to start their hit song “Red Hands”. After this, Sarah and Gianni each grabbed a light stick and ventured into the crowd to dance with fans during a compilation of popular dance songs they have covered and made videos. The weaved their way through the dense crowd, getting close to as many fans as they could during the medley.

Sarah said, “This next song was the Beard Guy’s favorite song to play in concert. So we want you to watch this tribute video and sing so loud that he can hear you.” It was a moving video set to Queen’s “Bohemian Rhapsody” showing various clips and photos of Mike “Beard Guy” Taylor interspersed with footage of him playing the song in concert. The band joined in for the end of the song just like shown in the tribute video. Here is the video that was shown at the concert:

“Sing It All Away” was their final song of the main set and Sarah said it is about singing along with thousands of your best friends. She played choir conductor for a bit and then raised the signed ukulele in the air, scanned the crowd, and then pointed to a young girl in a sparkly silver hat as the recipient of the special item tonight. Here’s a picture of Jaiden and family proudly showing off her prized possession. 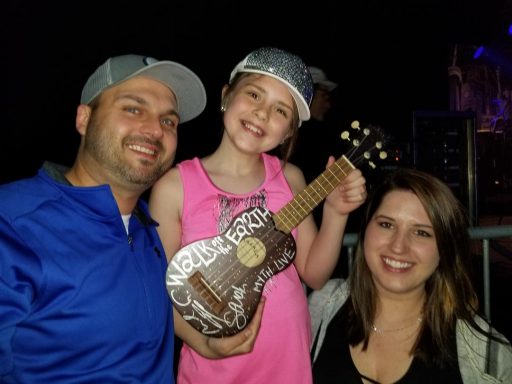 Sarah returned to the stage to ask if the crowd wanted a few more songs. Before starting their encore set she asked for a round of applause first for the WOTE band and then for the WOTE crew. Seated on the stairs they played an acoustic version of “Gang of Rhythm” and then “Hold On (The Break)” during which the Myth Live was filled with glowing blue hearts again in honor of Mike “Beard Guy” Taylor. You can still make a donation to MusiCounts, in Mike’s honor at HERE. Mike was a long-time supporter and advocate for MusiCounts, and he believed that all children across Canada should have access to music through their school and community. Sarah thanked us once again for coming to the concert tonight and told us they couldn’t be here without our support. They put the profits from concerts, music, and merchandise sales right back into making more music. “Rule the World” was the grand finale and featured more confetti and many giant balloons dropping on the audience to bounce around during the festive finish.

What an amazing performance by Walk Off The Earth. So refreshing to be part of such a fun and positive experience and watch musicians that just flat out love music. Definitely don’t miss your next chance to catch WOTE in concert!

The Lumineers with be making a stop at Roy Wilkins Auditorium on Tuesday, June 14th on their “Cleopatra World Tour”.  Touring in support of their newest album, “Cleopatra”, they have been selling out venues all […]

Minnesota-based rock band Kick has been spreading their high-energy performances locally and throughout South Dakota, Iowa, and Wisconsin. Tuesday night at First Avenue 7th Street Entry was no exception. From the first note to the […]

In September of 2015 I wandered into a random show and completely fell in love. I fell in love with the music, the vibe, and everything else that happened that night. That show was headlined […]