On first take, it’s hard to imagine two more disparate musicians than former Blasters and X guitarist Dave Alvin and Texas bred Flatlanders founder Jimmie Dale Gilmore.  What they have in common is both are master songwriters who share a passion for early rootsy blues, R&B and country.  While they claim to have been friends for 30 years it wasn’t until last year that they found themselves on stage together.  They sat side by side with acoustic guitars last fall at the Cedar Cultural Center.

Sometimes collaborations seem forced.  It might be the connection is contrived.  It can be two egos that can’t fit on the same stage.  However, the acoustic tour went so well they decided to take the chemistry into the studio along with Alvin’s band The Guilty Ones.  The result was the critically acclaimed Downey to Lubbock.  The title a nod to not only their musical styles but where they grew up.

It was a good decision.  The album climbed its way to the top of the Billboard charts.  As Alvin, the rocking blues man chuckled:  “I got to call up Jimmie and tell him something he’d never heard before.  His album was #1… on the Blues charts.”  Gilmore, a two time best Country Music Award winner, is no stranger to the charts.  But that was a new one.  Yet one would be mistaken to think that somehow the album and this tour leans in Alvin’s rocking blues direction.  It goes straight down the middle like a two lane black top stretching across the desert.

I will admit, I love The Dakota in downtown Minneapolis.  By the same token, it’s not the kind of venue I rush out to see a show that I know will get loud.  It always seems a bit refined for blasting Stratocasters; in Alvin’s words, a bit “swanky”.  Time and again I realize how wrong that impression can be.  The Dakota jumps.  It just takes a bit longer to get going until the fine dining dishes have been quietly whisked from the tables.  Long time owner Lowell Pickett’s secret recipe is that anybody who appears on his stage is world class.  Be it jazz, blues, country or rock.

On Thursday the joint was sold out.  There was a buzz with loyal fans chomping at the bit as well as the Chef’s special.  Near my position near the bar were numerous patrons who were quick to share stories.  Stories of when they had previously seen either of the guys, in any of their many incarnations.  The common theme was that Alvin and Gilmore represented the finest of American Music.   I am not quite sure exactly what that means.  But I would be quick to confirm it.

Alvin and Gilmore, backed by the crackerjack Guilty Ones, opened with the album’s title track, a self descriptive blues shuffle.  Alvin’s flinty baritone growled:

from a sun burnt California town.

And I got a loud Stratocaster

That can blow any roadhouse down.”

Scratchy tenor Gilmore sings back at him:

And I’m an old Flatlander

from the great high plains.

In that opening couplet things are defined.  A pair of troubadours rolling down the road toward a middle which will meet at the Ash Grove; a legendary folk and blues club that burned to the ground in 1973.  Long gone but still a touchstone for old hippies and musicians alike. A touchstone for American music.

The next 90 plus minutes was a bit like a backyard drinking party among friends.  The two shared humor, stories and the spotlight song by song.  The set list ran the gamut from the old 1924 Memphis Jug Band classic Stealin‘ through the Alvin penned Zydeco classic Marie, Marie.  Along the way the audience was treated to songs like personal favorite Johnny Ace is Dead and Dallas (which brought a number of patrons to their feet).  From the album came the heart-rending Billy The Kid and Geronimo in which Alvin takes the part of The Kid and Gilmore plays Geronimo.  Two lost souls, eyeing each other suspiciously, confessing their violent, outcast pasts before riding off; in one case to a bullet, in the other to prison.  It occurred to me that the root of the story, that inexorable ride toward unavoidable tragedy, is a vein so fruitfully mined by the likes of Johnny Cash and the Alvin brothers, both Dave and Phil.

At a time when the social fabric of our society seems torn, I am grateful when artists choose to use their platform to bring people together. At the same time, folk and rock music have always had elements of protest and rebellion.  Songs carry a power that shouting never will.  The opinions of these two were clear. They brought the house down with Alvin’s 4th of July.  One of the patrons was so delighted with the song he ran through the tables tossing cocktail napkins into the air like fireworks (likely a first for the Dakota).  The spirit of Woody Guthrie was invoked with the haunting and still topical Deportee.  Later the band involved the audience singing the John Sebastian classic (Come On People) Get Together.

All who attended last fall’s Cedar show were treated to songs and personalities.  Last night we were also treated to a marvelous band to uplift these gems.  The Guilty Ones features the rock solid guitar work of Chris Miller.  His Fender Tele was the perfect tonal counterpart to Alvin’s Strat.  The rhythm section of Austin based husband and wife team Brad Fordham, bass and Lisa Pankratz on drums was stellar.  These two have an intuitive sense of  how to complement and give each other room to work while driving the band forward.

Pankratz brought the crowd to their feet with her her textured drum solo on Dallas. She takes a backseat to no one.  Don’t take my word for it.  Check a current feature that appeared in “Modern Drummer” magazine HERE.

For this tour the band brought along Welsh singer, songwriter and raconteur Jon Langford as the opener.  He was accompanied by guitarist John Selanski.  The primary charm of his performance was Langford’s self-deprecating humor and stories.  Like Alvin and Gilmore, he’s a musical wanderer.  Over his long career he has played rock, punk and old school country.

Langford is probably best known for founding the important early punk act The Mekons.  In a nod to Twin Cities connections, it should be noted The Mekons broke out while signed to our own Twin Tone Records.  At times there were echos of Joe Strummer, early Elvis Costello and UK rockers The Oyster Band.  Following a story of meeting Johnny Cash on the day he was unceremoniously dropped from Columbia Records, he jumped in with a country mash up tune called Nashville Radio.  The song referenced not only Cash but the likes of Hank Williams and Bob Wills.

Langford informed us that he grew up in the same port city as Strummer.  His house looked out across a cemetery where Strummer worked as a gravedigger before departing for London to launch the Clash. However, to characterize Langford as simply a musician misses the mark by a wide mark.  He is an also accomplished painter.  His work graces the cover of Downey To Lubbock. 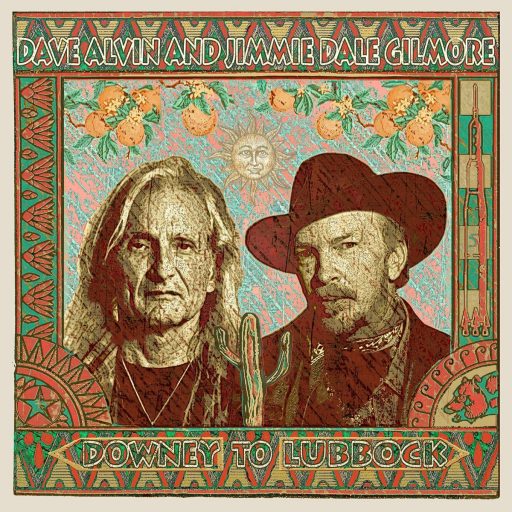 In what may have been the most humorous reflection of the entire evening Langford mentioned he was casually watching the recent John McCain funeral.  He shook his head and reflected on all of the cameo appearances:  “All The Ramones are dead.  And then they wheel out Henry Kissinger.  Where’s Karma, I ask you?”

There will be a next time for Dave Alvin and Jimmie Dale Gilmore.  Either alone or together.  It’s what they do, crisscrossing the country and singing their songs.  Each is an American treasure.  And each is closer to the end of that long road than to the beginning.  One thing for sure, they’ll travel those dusty highways as long as they can.  Make sure to keep your eyes peeled for the next time through.  They’ll leave you feeling American.

Thursday night featured the last show by Corey Palmer & Lovetrade for a while so fans were eager to see him at the Turf Club. Starting the Night was Aaron Rice a young Minneapolis native […]

Some bands walk on stage, some reveal from a dark stage. Matt & Kim? Their entrance is like a flash bang grenade. The Brooklyn duo takes the energy from 0 to Mach 1 in 5 […]