If you don’t know about Minneapolis’ resident party boy Prof, you’ve been sleeping on not only some of the most high energy music in the scene right now, but on some of the wildest live shows as well. He swung by Duluth Saturday night to finish out his Time Bomb Tour with Finding Novyon, Metasota, and Willie Wonka for a sold out show. I made the trip from Minneapolis after a long week of work, but was immediately energized when I walked into Clyde Iron Works. From start to finish, the vibes were great and, despite some trials and tribulations earlier in the tour, there was nothing but positivity in the house.

Metasota, Willie Wonka, and Finding Novyon, all up and coming local names, warmed up the crowd with high energy and lyrically intriguing performances. The crowd was still trickling in as the music began but the smaller crowd towards the beginning of the evening was made up for by some of the most vivacious and amped up party people I’ve ever seen.

Everyone in the crowd quickly became best buddies for the evening. From the moment the first note of music was heard, not a body in the house stopped dancing, drinking, or singing along.

The Minneapolis music scene, hip-hop in particular, is so inspiring and supportive. As a Minnesota transplant myself, that is one of the main reasons I fell in love with this city in the first place, and you can’t think of Minneapolis hip-hop without Rhymesayers coming to mind. The love both for and from this local label was strong all night. Earlier in the Time Bomb tour, Prof & company’s van got broken into, which incurred thousands of dollars of loss for them. Thanks to crowdfunding (and a dope donation from Pabst Blue Ribbon!) they were able to stay on the road and keep things moving, and their appreciation for that help didn’t go unnoticed.

Duluth was originally the final date for the Time Bomb Tour, but the gang added a last minute hometown show in Minneapolis. (Check it out on 3/2 at First Ave!) That being said, the energy Prof brought to the stage was clearly being pulled from the high that comes from finishing up a madly successful tour. He came on stage bouncing and jumping around, as he usually does, but the excitement and love were even more prevalent than usual. There were goofy dances, stage dives, beers being chugged, and even a proposal! Prof played bangers (duh!) and even slowed it down a few times for some “ballads.”

The beauty of Prof’s music is that it’s intricate and thoughtful, but easy to pick up and inclusive to everyone in the building, not just long time fans. That being said, by the end of the night everyone in Clyde Iron Works was covered in sweat and feeling some rasp in their voice. As everyone filed out of the building, or piled up at the merch booth, I overheard nearly everyone I walked past raving about how they were so glad they attended the show that night. I wasn’t the only person who was more than willing to drive from the cities to watch Prof give the performance of his life, and I know I’m not the only person who would undoubtedly do it all again. 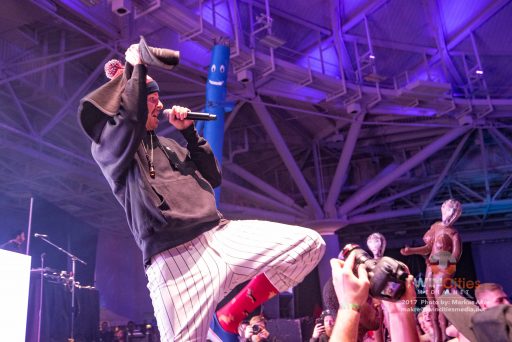 Ben Rector closes his 2 year tour at the State Theatre

Hailing from Nashville, TN singer-songwriter Ben Rector embarked on “The Biggest Tour I Have Done So Far” to promote his album “Brand New”. How big? Well, “Brand New” was released in 2015, and yesterday saw […]

Following the refined act of Lucius, Aussie rocker Courtney Barnett was like a giant bucket of ice water dumped on the Rock the Garden crowd chilling in the sun. Couture was replaced by black jeans […]