When a band has close to 3000 live shows under their belt it reflects in their stage presence and performance. Gaelic Storm definitely lived up to their fans’ expectations. On a rather cold night, Mill City Nights got creative and let fans wait in their basement rather than brave the single digits outside. That must have come great relief to the young lady who decided to show up in a halter top with no jacket in single digit weather. Kudos to the venue for keeping their guests in mind.

After a brief warm up by a duo of pipers, Gaelic Storm took the stage and immediately captured the crowd with “Scalliwag” from their 2006 album Bring Yer Wellies. They followed with  “Born to be a Bachelor” and a mix of their work over the last 10+ years.

The audience was enthusiastic,  had a great time, and left quite a bit warmer than they came in. And on a Minnesota February night, that’s about as good as it gets. 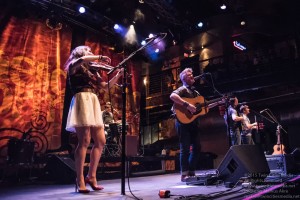 Tuesday marked the middle of October. The weather may be changing, but the selection of great live performance is not giving in to the Fall season. I ventured out in the early evening to the […]

Article by: Colton Davis Photos by: Markus Akre Horseshoes and Handgrenades  brought  down an old country road for their flavor of classic bluegrass that made flower-adorned dresses twirl gracefully. The Wisconsinites huddled around and shared […]

It’s been rainy, dreary and cold up here in Minneapolis. It’s hard not to feel a wee bit down because of it. Seriously… day after day of grey skies after a hellish winter that seemed […]