At 63 John Mellencamp is still going strong and released “Plain Spoken”, his first album in 4 year in 2014. His tour includes 2 stops at the newly renovated Northrop Auditorium.

He opened with songs from Plain Spoken and continued with a mix of his classic songs and newer material. Stage and lighting worked very well with his plain, no nonsense style. I have enjoyed John’s music since I bought a cassette tape of “The Lonesome Jubilee” way to long ago. 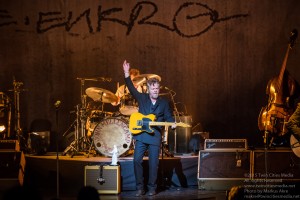 Polica And Velvet Negroni A Great Bill In Mainroom, November 8

Polica, is coming to the First Avenue Mainroom November 8.  Tickets and show details can be found HERE. The brainchild of Channy Leaneagh, Polica broke into Twin Cities consciousness in 2012.  Over the years, they […]

Conor Oberst, he of Omaha, NE and many projects finally played a set at Rock the Garden. Given the fan overlap between him and The Current the delay was surprising. Oberst is known for his […]

Imagine Dragons have been regular Twin Cities visitors ranging from the Varsity, to a crowd of 27,000 at TCF stadium as part of MLB all star weekend. This time around their chosen venue was the […]