My friends mean the absolute world to me. That being said, the amount of free time I have is slim to none so sometimes it’s hard to show them just how much they mean to me. Honestly, if you don’t enjoy going to concerts, chances are I see you just a few times a year and it’s usually cut short due to me needing to get to a concert. Although I am truly living my dream life, there are certain moments where I wonder if it’s all worth it. That moment came when my friend Rocky was diagnosed with breast cancer. My heart broke for her and as much as I wanted to go to all of the events her amazing friends had set up to help Rocky raise some money for treatment, my schedule just never seemed to match up and, well, I’m broke. I knew I had to do something for her but something very “me”. When her self proclaimed future ex-husband, Bret Michaels, announced a show out at Mystic Lake Casino just south of the cities I knew exactly what I could do for Rocky.

I had a couple of tricks up my sleeve and it wasn’t until after dinner and while we were walking into the casino that I told Rocky she would be meeting the one and only Bret Michaels. The smile the crept across her face is an image that I will never forget. We weaved our way through slot machines and people (after loosing a couple of bucks on the way naturally) and found ourselves at the merch table. After Rocky bought a one of a kind signed Bret Michaels hat and I cleared up some confusion with the staff regarding the meet and greet, we were herded into hallways and elevators until we were stopped in a hallway. After being given the rules of no photos from our cell phones (the professional photographer would take care of us) and absolutely no video, Rocky, myself, and everyone else in line for the meet and greet were slowly trickled into the room where we could meet the rock star.

Of course I was excited. I am not blind to who Bret Michaels is but there’s no question that I was more excited for Rocky. She gave me her purse, then her drink, then she wanted her purse back. Glasses on or off? She gave me her glasses. Nah, then she couldn’t see. She took her glasses back. This whole event lasted probably no more than a minute but it was such a touching minute. After a hug, Rocky got her picture with a man that she had only ever dreamed of meeting. The smile that I had on my face was seriously painful and it honestly took every ounce of me to not breakdown and start crying in that moment. The meeting between Rocky and Bret was quick but absolutely everything. I was up next and although clearly not as enamored with him as some of the other people in line, I couldn’t help but get butterflies in my stomach as I hugged the one and only Bret Michaels and posed for a picture. The meetings for everyone were quick but somehow Bret made you feel like you were the only one in that line that mattered. Asking me if I was ready to rock, I was seriously lost for words and just nodded like an idiot before exiting the room. I’m not typically one for these kind of meet and greets due to the impersonal nature of them but, again, there was something to personal about this one. If you ever have the chance to meet Bret Michaels, I truly urge you to do something. A breath of fresh air (and he smelled really good), any worry you may have in your heart will instantly be gone with just a hug from this man. 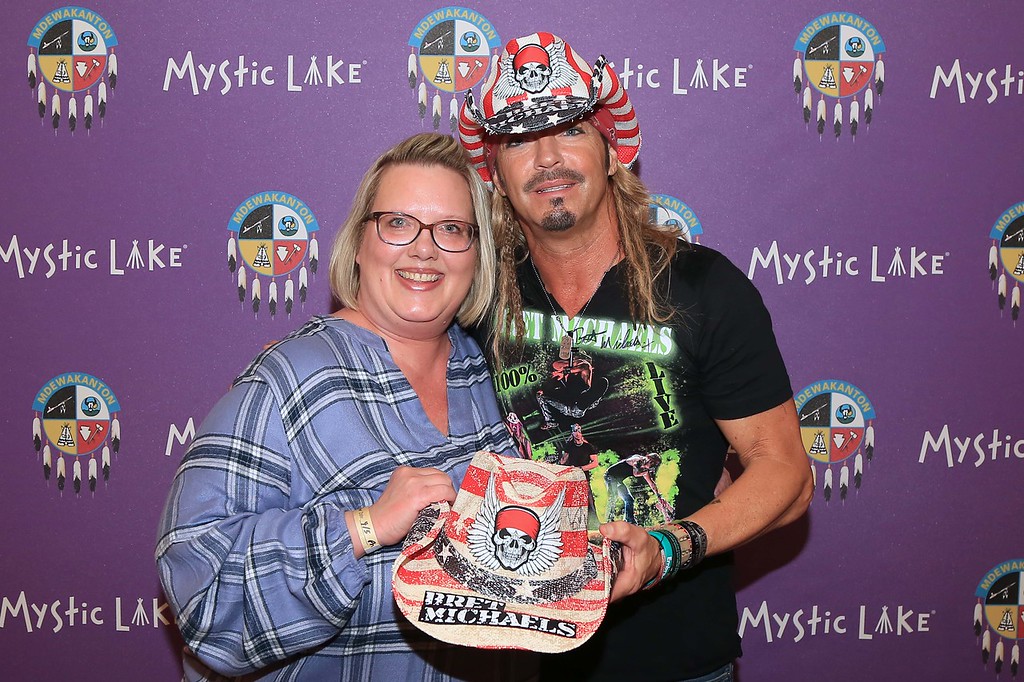 Long story short, Rocky was ecstatic, I was still in shock at how personable Bret was as we went back through the maze of hallways and elevators to find our seat. Timing was perfect and almost instantly Bret was taking the stage to a sold out Mystic Lake Showroom. I didn’t know what to expect as shows like this are definitely not my normal thing but I was instantly swept away into my concert dreamland that I so often find myself lost in. With no shortage of energy, Bret Michaels and his band blasted through around a dozen songs in what felt like the blink of an eye. From of a cover of Lynyrd Skynyrd’s “Sweet Home Alabama” to closing with KISS’s “Rock And Roll All Nite”, any worry of my not knowing songs was thrown straight out the window. I also didn’t realize just how many Poison songs I actually knew. From “Every Rose Has Its Thorn” to “Nothin’ But A Good Time”, I think I sang more at this show than I did at Weezer

I can not say enough about Bret’s energy. Electric doesn’t even start to describe it and for being in his mid-50’s, it’s clear that his man is doing exactly what he is supposed to be doing with his life. Just like in the meet and greet, Bret had this way of being so personable during his performance. He spent about 80% of the show with his hands down in the crowd shaking the audience’s hands and giving out high fives. I don’t even see low level bands do that kind of stuff but here was the one and only Bret Michaels taking the time to make sure everyone who wanted a high five or handshake would get one or thirty. There was a sense of honesty that came through the speakers as he talked about how he always has a great time in Minnesota and can’t wait to come back (he hinted at a performance maybe later this summer?!).

Honestly, the only reason I went last night was because of Rocky. Obviously I knew who Bret Michaels was and of course I have a soft spot for the party anthems he put out with Poison but the whole 80’s rock thing isn’t really my cup of tea. The fact that he and his crew were nice enough to give Rocky and I the meet and greet slots said it all but it was the way Bret Michaels seemed like a person, not a rockstar, that really solidified my opinion on him. Meeting musicians can either make or break their music and meeting Bret Michaels may or may not have me spinning my Poison records this morning (sorry to my neighbors). I have so much more to say about last night. The fact that Bret’s hats that he wore during the show (there were 3) were auctioned off afterwards for his charity (Life Rocks Foundation) and were sold for around $800, or the way I woke up with a sore face from smiling so much… long story short, I loved everything about Bret Michaels and his show.

Last night is a night that I will remember forever. Not because I got to meet and see Bret Michaels but because I got to see a good friend realize that she made it through the fight of her life and she can only go up from here. I am spoiled when it comes to going to concerts and meeting some amazing people but after the forty minute car ride to drop Rocky off at home which consisted of her replaying the night out loud at least forty-seven times, I was completely humbled.

I can not thank Bret Michaels and his crew enough for giving both Rocky and I such an amazing night.

Every so often you come across one of those bands that just stand out from the rest. That’s not to say we don’t have respect for any artist making music and getting on stage sharing […]

John K. Samson At The Turf. Always Darkest Before The Dawn.

I love those shows when a bunch of friends and family pile in the car.  Even more when you run into unrelated branches of your social tree at the venue.  Some bands or artists have […]