Last night, doting music fans gathered in droves for “An Evening With The The Rembrandts” at the Parkway Theater in South Minneapolis to be serenaded by one of the most iconic music duos of the decade.

Kicking off the evening was a solo acoustic set from local musician Chris Perricelli of Little Man. Little Man is a local band that has been frequently playing around the Twin Cities, delivering late 60’s early 70’s influenced psychedelic rock with a modern feel. Last night, it was just Perricelli on stage with his acoustic guitar.

Knowing very little about Little Man (no pun intended) before heading into the show, I was completely delighted by his set. Perricelli has such a warm stage presence and sound. It’s usually a rare occurrence that I am totally captivated by an opener, but Little Man was an absolute treat to see. Perricelli’s voice was strong and rugged, and transported me right into the raw garage rock vibes of the 70’s. The best part of his set was the last song, in which he rallied the audience to sing the last harmonies of one of his new songs. “We’re going to be really loud so the guys of the The Rembrandts sitting backstage hear you and think, “What is he doing out there? It’s time to yank him off the stage!” Perricelli joked.

Twin Cities locals — I strongly recommend that you get out and see this guy (and his band) play sometime in the near future. Little Man is an underrated treasure in our music scene and will not disappoint. 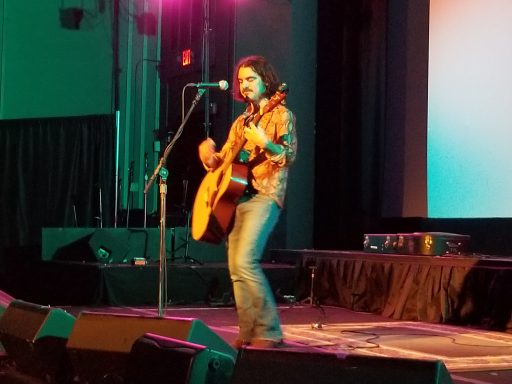 The band came on stage at The Parkway Theater greeted by the sound of a roaring applause. The Rembrandts are a band that do not play live shows very frequently anymore, and the audience was grateful to have them last night. One woman sitting in the crowd even bought a drink for Phil while he was in the middle of playing a song. You could tell the love between band and fans was mutual.

The band began by playing some older, familiar songs before peppering in new material here and there. And while originates from the west coast, I found out during their set that the duo also has ties to Minnesota. Danny bantered with the audience saying, “How many people here are from St. Paul? A lot! I bet most of you went to Phil’s house when he lived here.” The audience chuckled and cheered before playing their song entitled “St. Paul”.

“This is a song I wrote about St. Paul while I was in Minneapolis…” Danny said. “It’s called St. Paul.”

“St. Paul in the winter, kids are crying for their dinner… Quick smoke and a drink, then it’s time for bed… He said, “Why do you always seem so down? Is something lost that can’t be found?”

As the show continued on, I found myself being increasingly soothed by the duos guitar playing and harmonies. Watching them preform made it obvious that The Rembrandts are truly the best at what they do. There is something really special about their live performance that does not quite translate as powerfully to the recorded music. Their acoustic guitars complement each other perfectly, and their voices blend together like warm honey drizzled in hot tea. It just a sonic combination makes your ears purr. Even the songs I was unfamiliar with locked me in and put a smile on my face. Every song the band played was filled with such a wonderful and rich sound, I could have listened to them play all night. It’s also great to see the friendship between both Danny and Phil. They are no frills kind of people, just incredibly relaxed, having fun doing something they love. 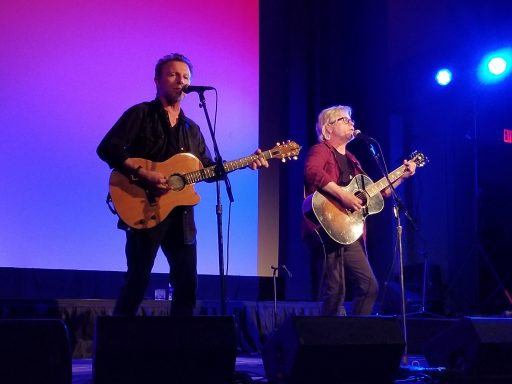 After a short intermission, The Rembrandts tested out plenty of new material from their upcoming album, Via Satellite. One of the most memorable songs played was “Broken Toy”, which according to the band, sounds much heavier on the album than the reworked acoustic version they played last night. All of the new material The Rembrandts was exceptional, and I greatly look forward to the release of their new album in August.

At the end of the night, the band closed their main set with their most iconic song, “I’ll Be There For You”, which everyone knows best as the beloved theme song for 90’s sitcom Friends. Before going into the song, Danny jokes, “Alright, is it four claps, or five? It’s one of those things that’s always been a mystery and know one really knows.”

It was great to see The Rembrandts live. They are one of the few bands doing longevity right, and they absolutely deserve the continued support from fans. Hopefully they will come back around soon.

Dead To Me Warms Up Crowd At Triple Rock

I walked into last night’s show to the sweet sound of some good old fashioned pop-punk music. The show was opened up by Minneapolis’ own, Drones. I have to be honest, I had never heard […]

The Northern Invasion Festival Stands The Test Of Time

As the calendar turns towards May, we note the unofficial start to what we now call Festival Season. As part of the World’s Loudest Month, the fourth annual Northern Invasion Festival prepares to descend on […]

Kishi Bashi weaves his web of music at First Avenue

Kishi Bashi the musical alias of Kaoru Ishibashi came to my ears attention when “Say Yeah” started playing on the current a couple of months ago. When I saw his show on First Avenue’s Calendar […]