Music inspires us, brings us together, builds friendships, and has the power to ignite activism for a good cause. The sense of camaraderie was alive yesterday as over 30+ Metallica friends, fans, and family joined together at Second Harvest Heartland food bank in Brooklyn Park, MN for the second annual All Within My Hands Foundation Day of Service. All Within My Hands is a non-profit organization created by Metallica to support workforce education, the fight against hunger, and other critical local services. Since the organization formed in 2017, Metallica has donated $10,000 to a local food bank in every city they play a show in, roughly translating to 30,000 meals per show. They also encourage fans and volunteers to help out and join a good cause in the fight against hunger and food insecurity in any way they can.

May 22, 2019 was the second annual All Within My Hands Foundation Day of Service — a widespread volunteer event where Metallica calls upon their fans to organize and help out their local participating food bank. Many Minnesota Metallica fans rose to the occasion and offered a helping hand at the Second Harvest Heartland food bank in Brooklyn Park, a Feeding America member who strives to give our neighbors the hope and stability they need. When volunteers arrived, they were given an official “All Within My Hands” volunteer T-shirt to proudly wear while working on the food bank floor. After a quick orientation, groups were assigned to a specific task in the packing center. Tasks ranged from making and labeling boxes for distribution, packing lunch kits, bundling potatoes, and quality checking donated food. 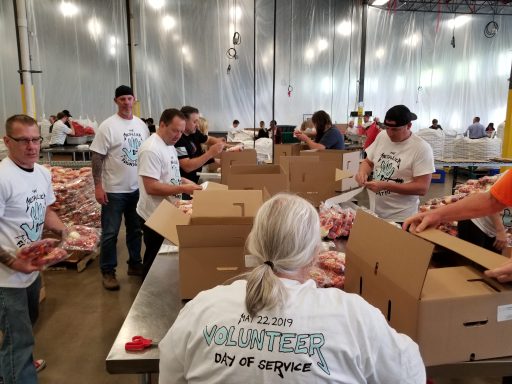 Minnesota based ONE Metallica Tribute band was at Second Harvest Heartland, along with official local Metallica club chapters “Minnesota Militia” and “Trapped Under Ice in MN”. All three of these organizations made a strong appearance, and helped lead the cause, organizing members of the community and spreading the word.

In total, Minnesota Metallica fans packed 18,416lbs of food at Second Harvest Heartland, all of which will be quickly distributed across the state and in the hands of someone in need as soon as 24-48 hours after packing. Volunteers with the local Metallica club chapters and ONE plowed through the supply of potatoes, carrots, celery and onions were able to pack a total 3,140 meal kits in 2.5 hours. The rest of the volunteers were able to pack thousands of pounds of potatoes and other foods.

The All Within My Hands Day of Service demonstrated how strong and active the local community can be. When we all work together, there is no limit to what we can accomplish. Thank you to Metallica, All Within My Hands, and Second Harvest Heartland for bringing together music fans in Minnesota and all across the country for a great cause.

And of course, the biggest shout out goes to the organizers at Second Harvest Heartland, who were kind enough to have Metallica playing over the warehouse speakers the entire volunteer shift. Until next year!

Gojira, one of France’s most extreme metal bands is coming to the Myth 10/16. Their album “Magma” was just released June 2016. Gojira is currently touring the U.S. and Europe promoting the new album […]

Cold temperatures, a raw drizzle and general gloom descended over downtown Minneapolis Wednesday night.  I chuckled at the thought of play-off baseball in Minnesota.  I imagined the beginning of a long post season run with […]