Last night’s show couldn’t have come at a better time. I’ve been feeling tense lately. Maybe it’s adding that early morning work out class to my already nightmarish daily schedule, maybe it’s the full moon, or maybe it’s the boredom that comes during the slow season at my day job. Regardless, I needed a show that would take my mind off of everything else and force me to just chill out a little bit. That’s exactly what I got from Soja’s Wednesday night show and although it kept me out way past my bedtime, it was everything that I needed.

Getting my night started in the most beautiful way was Xiuhtezcatl. The connection between front-man Xiuhtezcatl Martinez and the rest of his band screamed friendship and that feeling radiated out to the crowd. Although the group kicked into their set before the advertised start time, instead of heading straight to the bar upon entry into The Varsity Theater, Xiuhtezcatl’s music seemed to draw the new guests directly to the stage. It was obvious why. There was an undeniable sense of energy as this young group serenaded the audience with their unique blend of hip-hop, reggae, and activism. At only 18 years, Xiuhtezcatl came off as much more than just a musician. He spoke about social injustices and how we all need to come together as a culture and change this doomed path that society seems to be going down. It was powerful and, when added to the music with lyrics that seemed to mirror some of these issues, you were left with a feeling of empowerment that you rarely get from bands that mix politics into their set. His words were spoken with such conviction and Xiuhtezcatl and the rest of his band came off as so genuine that it was impossible to not fall head over heels for this young group. Unfortunately due to the earlier than advertised start time, I only caught the tail end of their set but I do hope that their journey will lead them back to the Twin Cities soon so I can experience it again. 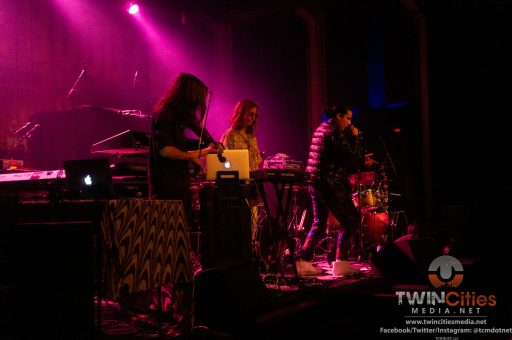 Following up Xiuhtezcatl’s opening performance was Collie Buddz. Much like Xiuhtezcatl, Colin Harper (stage name Collie Buddz) took the stage with his friends behind him and instantly had the audience swirling around to the beat. Although sticking with a unique brand of hip hop meets reggae, Collie Buddz’s performance brought an almost dancehall atmosphere to the quickly filling up venue. Although Collie Buddz has experience fame with his hit “Mamasita” which hit big in 2007, he came off as very fun as he jumped around with the audience. The music may have been a bit out of comfort zone but the atmosphere definitely wasn’t and I couldn’t help myself but move around a little bit to the beat. The upbeat rhythms and energetic stage performance left patrons with a set that felt more like a headliner’s set than an opener’s. It left me with strings of notes stuck in my head along with a beat in my soul that I just couldn’t shake. I had gone into this show a bit blind other than knowing it was going to be some sort of reggae show. Collie Buddz’s set reminded me how sometimes stumbling into a random show and knowing nothing allows you to be a bit more free with yourself and, as mentioned, that was exactly what I needed.

Grammy nominated Soja was the final band to perform on Wednesday night. Hailing from Virginia, Soja had a more standard reggae sound than the two previous acts while still staying completely original and unique. I watched in wonderment as the stage filled up with the eight musicians and couldn’t help but refer to them as the Slipknot of reggae music in my mind. As soon as singer Jacob Hemphill took the stage, the crowd broke into a roar of applause and cheering and, with that, I was whisked away into a world with no cares and no stress. Soja’s set was my first headlining set spent inside the photo pit trying to get some actually good pictures. To say I was nervous and anxious would be an understatement. Here I was in between die hard fans and the band with my little point and shoot camera. As soon as the band kicked into their set, all of my anxiety and all of the nerves were replaced by a sense of calm. Out of all of the bands that could have been my first for photo pit shooting, I honestly think Soja was the best choice.

With eight full length albums out, Soja could have filled hours on hour with their uplifting, infectious music. Although not hours on hours, their nearly two hour set lasted late into the night and kept the audience moving and me oblivious to just how late it had gotten. Although all of their songs tended to have the same style, they were so distinctively theirs that none of the songs sounded the same. Each one had a different vibe about it but each vibe was fun-loving and almost freeing in a bit. I’m not a dancer, hell, I rarely even move at concerts that don’t have a mosh pit but Soja’s music had me swaying to the beat. The mood on stage seemed to match the mood in the audience. Everything just seemed so loose and, after my research this morning and finding out that Soja has been a thing since the late 1990’s, it all made sense. There was a sense of cohesion on stage while still having a feeling of spontaneity and that just added to the fun energy in the room.

I walked into last night’s show tense and stressed. I left feeling energized and free from all of my anxiety. Crazy how a random show you knew nothing about prior to walking in can change absolutely everything. Ah the power of live music.

Waterboys Storm The Varsity Like a Hurtlin’, Fevered Train

One of my favorite aspects of writing for TCM is that at the end of the year we get to walk down the memory lane of all the shows and pick the top 5.  The […]

Drive-By Truckers get the crowd moving at First Avenue

As Minneapolis fills with people Patriots and Eagles fans a select few got into the sold out Drive-By Truckers at The First Avenue Mainroom. The bill consisting of DBT and their opener Lilly Hiatt packed […]

Ready to have a great time for a great cause? Help She Rock She Rock (SR2) move into their 10 year anniversary by attending this year’s Rock-n-Bowl SR2 Fundraiser on Sunday, February 21st. The bowling begins […]