Slayer brought their 2016 Repentless Tour to a SOLD OUT Myth on Friday night. With Carcass and Testament opening the show, the night was assured to be a supreme attack of hardcore, in your face Metal … and there was NO disappointment. With the Myth nicely packed and the beer flowing, Carcass kicked off the evenings performances. 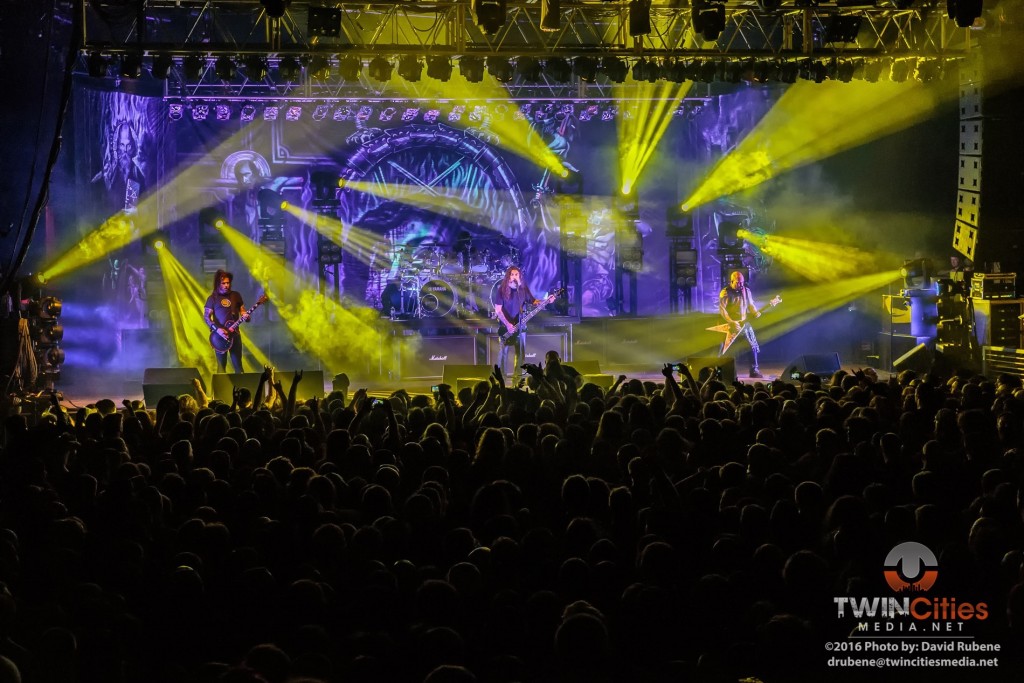 Having formed in 1985, Carcass disbanded about 10 years later and then reformed a little over 10 years after that. With songs called Swarming Vulgar Mass of Infected Virulency, Rot ’n’ Roll, and Festerday, these guys were among the first of their kind and pioneers of new genres of metal such as grindcore and melodic death metal, but my favorite that I have found that describes their music is “goregrind.” Their lyrics consist of every single bad-ass, disgusting word that exists in the English language and every word that could ever make you uncomfortable (if you allow it to) … and playing in front of a backdrop of surgical tools, they don’t let you forget their gorey roots. Bassist/singer Jeffery Walker and Bill Steer on lead guitar have been around since the beginning. Since reforming in 2007, they have been joined by Daniel Wilding on drums and Ben Ash on guitar. Just recently, Carcass has been touring again with the release in 2013 of their newest album Surgical Steel, their first album in 17 years. After all of this time and with new members, they’ve still got it. And they may have started off the show, but the energy in the room was off the charts as soon as they began. The fans were pleased to be able to hear some old Carcass classics as well as some of their new material, and all of it was headbangin’ good. Their set was extremely tight, solid, and driving in every aspect. The crowd was immediately hooked from the first song to the last. With Carcass kicking things into high gear, the crowd was really psyched for what would follow.

Keeping the intensity going, Testament took the stage next. They created a nice mood for their set by having incense burning at the edge of the stage, which I have never seen at a show before but thoroughly enjoyed. Not only was I watching their performance, but I was technically smelling it as well. Testament is a thrash metal band from Berkeley, California, and they have been wildly popular in the thrash scene since their inception in 1983. They have seen a lot of changes throughout the years, but Testament has been going incredibly strong for 33 years now. 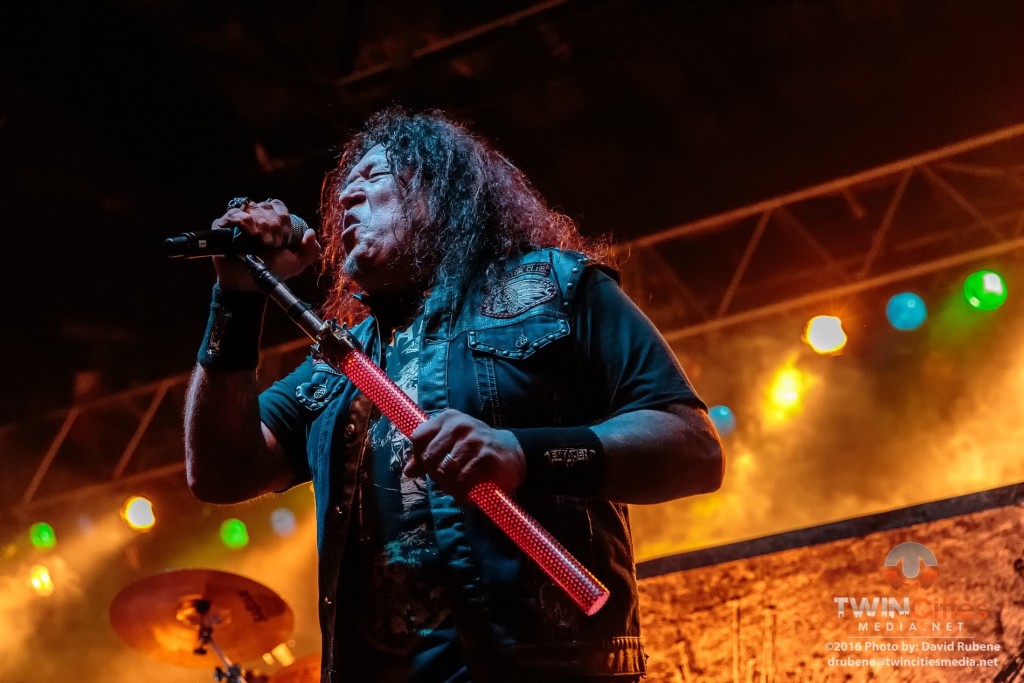 It is spectacular to see a group play a show so enthusiastically knowing they have been around for so long. Like Carcass, Testament has seen many members come and go, but they currently have a solid lineup with original guitarist Eric Peterson. Chuck Billy is currently on vocals and was clearly having a ball doing so. I think he played more air guitar than the guitarists played real guitar. His glow-in-the-dark microphone provided a nice effect to their driving stage presence. As always, Testament was hardcore, solid and put on a fantastic performance. I also experienced one of my favorite metal show experiences when Billy encouraged the crowd to do the infamous “Wall of Death” … it was quite a spectacle to see. Testament has been working on a new album, Brotherhood of the Snake, which is set to be released later this year (can’t wait!).

Slayer has to be one of the biggest names in thrash metal, and have been around since 1981, formed a whopping 34 years ago in California. Kerry King is the only original member remaining, but despite having been around for as long as they have, this band has seen an extremely low turnover rate compared to the other two bands who have been around for almost as long. Slayer has seen quite a bit of controversy over the years, but they do what they want, and they do it well and with good intention. They have also managed to maintain a huge following throughout all of these years. Judging from the crowd response, Minneapolis holds a nice set of those loyal fans. 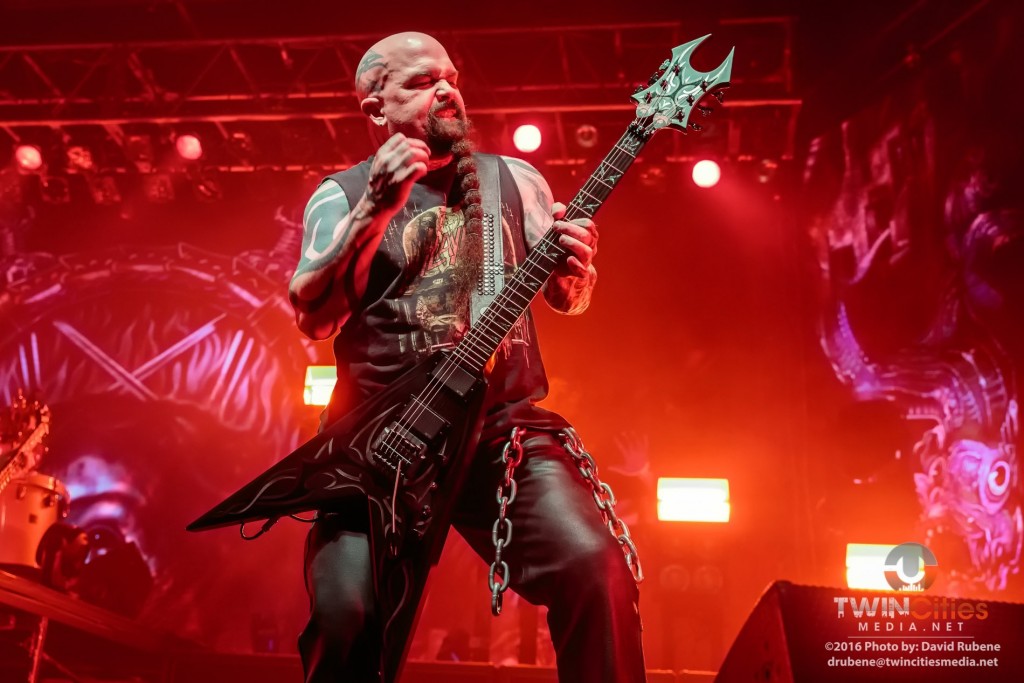 Before they went on, a large white tapestry hung from the ceiling, blocking the stage. Lights and images of upside down pentagrams flashed across the sheet, and the audience waiting in extreme anticipation began chanting “Slayer, Slayer, Slayer…” The curtain dropped, and BLAM … Slayer kicked off their set with Repentless!! It was non-stop intense metal and chaos that ensued for the rest of the show. Slayer didn’t miss a beat, and the enthusiasm and adrenaline of the crowd was contagious. I love seeing shows where the crowd has huge smiles splattered across their faces, and this was one of those shows. To continue the amazing moshing trend at this show, Slayer managed to get the entire floor moving in a circle pit. 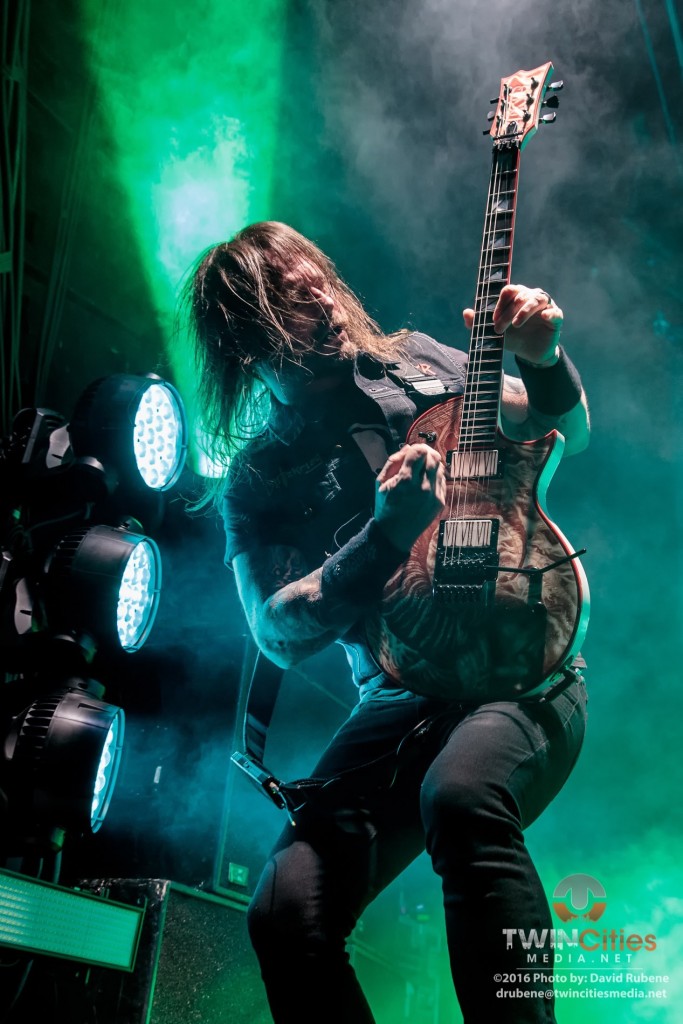 The projection of sound and power behind their music was also incredible. As I was taking photos from the pit in front of the stage, I thought the booming of the bass was going to vibrate my cells down to their very essence, making them split apart and cause me to disintegrate. The sound was intense enough that my heart felt as if it was beating outside of my body. They flawlessly cranked out some fan favorites such as War Ensemble, Angel of Death, and Raining Blood as well as popular tracks off of their newest album, Repentless, the bands 12th studio album that came out at the end of 2015. 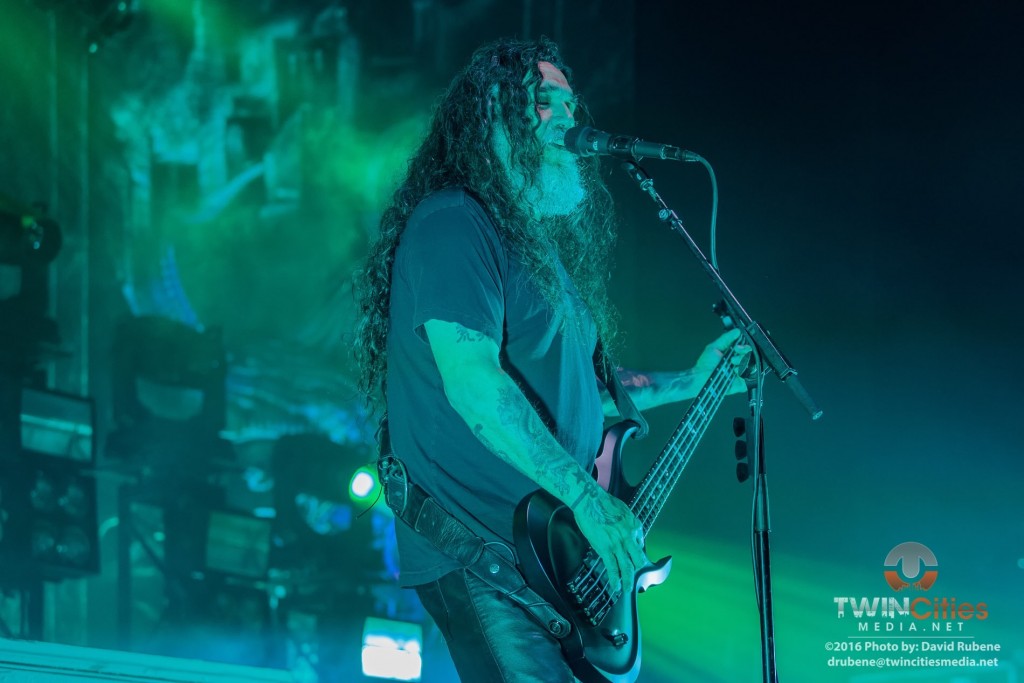 The overall experience at this show was more overwhelming awe than anything else. Three highly influential metal bands that originated in the early 80’s all under one roof in one single SOLD OUT night… it was an absolute honor to be in attendance. They will be thrashing across the United States through the end of March, and this is definitely a metal show you’ll NOT want to miss.

Dark Metal wolf pack Moonspell ravaged Mill City Nights with their obscurity, heaviness, electricity and undisputed talent. Having had an impressive career and discography already, many audience members were hoping to hear older material, as […]

Alt rock legends Dinosaur Jr. gave a bone shaking performance at The Palace Theatre on Thursday night.  Guitar God J. Mascis and band are out supporting their current release Give A Glimpse Of What Yer […]

I called my significant other and said goodnight as I was on my way to a show Saturday night, but it was only about 7:30 or so – why did I do this? Well, I […]