If you are looking for a good time on Saturday night November 2nd, you’ll find it at St. Paul’s Amsterdam Bar. Boston’s Ripe will be there giving you everything you need to ignite a dance party, as the seven-piece band will be laying down their irresistibly funky beat. Now let’s fill the Amsterdam and get those bodies moving. Back on January 30th, Ripe was scheduled to play the Amsterdam but the show had to be canceled, along with everything else in town, during that dangerous stretch of sub-zero weather. They said they’d be back and now they are. The opening band is Australia’s Castlecomer. Doors open at 8pm and this strictly 18+ show begins at 9pm. Be there or be square. Tickets are just $15. Get them HERE.

Ripe is seven musical soulmates who refuse to believe in a single definition of dance music. They are an unstoppable groove, an extended moment of ecstatic release, the catalyst for taking “just another night” and elevating it into something else entirely. They are the swagger of funk filtered through a rock anthem, a musical journey that somehow gets as stuck in your head as your favorite pop banger. They are the anchors of a rapidly growing community, a series of new friends becoming good friends, becoming part of the extended family as their sound spreads and their world deepens. They are here to look at joy with the same depth as most people look at sadness, to find a happiness that is heavier and more meaningful than simply a distraction from the negative. Born all over, formed in Boston, Ripe is ready to bring the whole world to its feet.

On a primal level, we react to music through movement. A head-nod, a foot-tap, or a handclap certainly shows appreciation, but dancing seals the eternal bond between audience and musician. Siphoning the spirits of rock, funk, R&B, jazz, and pop through a kaleidoscope of unpredictable and virtuosic improvisation, Boston-based seven-piece Ripe consistently bring people to their feet. Most importantly, they prove that “dance music” in its purest form doesn’t have to come from computers and synthesizers. It can be an unstoppable groove or an extended moment of ecstatic release. Like those bodies moving on the floor, it’s the result of the energy, friction, and communication between the living and breathing people.

An inimitable and indefinable chemistry has separated and singled out Ripe since day one. Subverting any and all standard genre boundaries once again, their latest offering confidently continues that tradition. These seven musical soulmates —Robbie Wulfsohn [vocals], Tory Geismar [guitar], Jon Becker [guitar], Sampson Hellerman [drums], Josh Shpak [trumpet], Calvin Barthel [trombone], and Nadav Shapira [bass]—once again incite listeners to move on their independent full-length debut, Joy In The Wild Unknown. “What we make is music you can dance to,” affirms Robbie. “We’re drawn to the peak of a song—the emotional catharsis when everything comes out. It’s all about reaching that moment. The revelation comes back to us when bodies shake with joy.”

“Every time we play, something unique happens,” adds Jon. “You’ll never see the same show twice. We want to bring that unexpected element into the pop sphere.” Ripe brings the swagger of funk filtered through a rock anthem, a musical journey that somehow gets as stuck in your head as your favorite pop banger. “We’re gap bridgers,” adds Tory. “If you’ve never heard us, I like to describe our music as, ‘If Maroon 5 and Earth, Wind, & Fire had a baby.’”

Formed during their Berklee College of Music days in 2011, the boys have built a rabid fan base through tireless gigging and a steady stream of music. Following 2013’s Produce The Juice EP, the 2015 Hey Hello EP yielded fan favorites like “Brother Sky,” “Talk To The Moon,” and “Goon Squad,” which clocked over 1 million Spotify streams. Averaging over 100K monthly listeners on Spotify, the group landed looks from the likes of WXPN, Huffington Post, Verge Campus, Boston Globe and Hype Machine love from sites like Ear to the Ground and Indie Obsessive.

Along the way, they also hit the stage at festivals such as SweetWater, Levitate, The Rock Boat, High Sierra, LaureLive, Brooklyn Comes Alive, Audiotree, and Summer Camp. The common thread would always be the translation of their individual interplay to their audience, one that Ripe views as not just fans, but old and new friends; an extended family that is rapidly growing as their sound spreads and their world deepens. “The community is so important,” says Robbie. “We’ve got amazing fans who really show up for us. We want to integrate the camaraderie into everything we do. Now, the goal is to communicate our vision to a much wider demographic.”

Joy In The Wild Unknown represents a creative culmination of a six-year journey. The band tapped the talents of producer Cory Wong of Vulfpeck behind the board. Additionally, five-time GRAMMY® Award winner Joe Visciano [Mark Ronson, Adele, Beck, Coldplay] mixed the music, while mastering came courtesy of Randy Merrill [Lady Gaga, Lorde, Imagine Dragons, Taylor Swift]. Over the course of twelve songs, it finds the elusive sweet spot between jaw-dropping technicality and airtight songcraft as Ripe collectively kick off a fresh, focused, and fiery next phase. “It took us a long time to get to this album,” Sampson admits. “It never felt right to do a full-length until now. Everything finally locked into place. Just prior, we’d been on the road for a year-and-a-half. So much was happening, growing, and changing. It was the moment to make the record.”

“Simultaneously, this was the ending of a lot of things and the start of something new,” adds Robbie. “This serves as our transition from a band that brings the party towards a band that brings an edge to the party.” Ripe introduced this body of work with the simmering bass line and a wild wallop of a single “Little Lighter,” which quickly shuffles into funked-up guitars and a swooning refrain—“I feel a little lighter.”

Meanwhile, finger-picked acoustic guitar and a delicate beat drive “Downward” as everything climaxes on another festival-ready chant, “This love keeps pulling me downward.” A chorus of horns fuels “Flipside” before Robbie’s dynamic delivery instantly hypnotizes. Throughout the verses, he shares “the crazy miasma of emotional ups and downs with touring.” Fittingly, the latter spawned the title, Joy In The Wild Unknown. “Personally, I’m at the point where every day seems a little bit surreal because I’m doing the thing I want to do more than anything else with my best friends,” smiles Robbie. “Music is what defines us. It’s what we get to put out into the world. I want to share this deep excitement and happiness. The phrase, ‘Joy In The Wild Unknown,’ spoke to all seven of us.”

Ripe gives the same weight to happiness as is often given to sadness. Their music signifies more than just a distraction from your troubles for a few hours – it’s an experience of connection and acceptance; a warm welcome into their world. In the end, this Joy is shared by an ever-growing community that’ll be dancing every time Ripe roll through town. It’s an extension of the bond between these seven.

“If you’ve never seen us, I want you to feel like you’ve stumbled on a real family upon introduction and get excited and curious about how to get deeper into this world,” Robbie leaves off. “It’s been about building this thing since day one. I hope you leave exhausted from dancing and feel excited to be a part of something. If you feel that way after seeing us, we’ve done our jobs.” 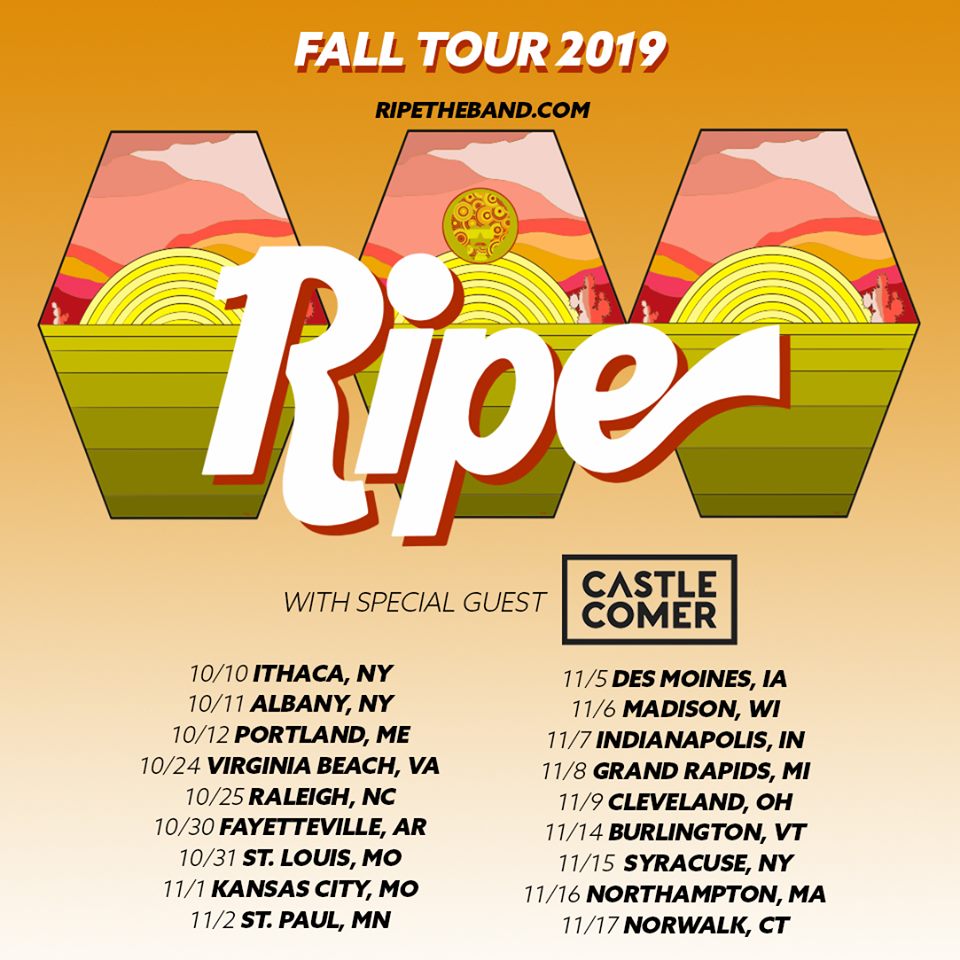 Five-piece band Castlecomer released their self-titled debut album last October via Concord Records. Brimming with blissful energy and infectious hooks, Castlecomer follows the band’s remarkable rise from the pubs of Sydney to the Spotify Global Viral Chart, where their single “Fire Alarm” hit #6 on its way to racking up nearly six million streams. The track has garnered airplay everywhere from Triple J to KROQ to SiriusXM’s Alt Nation and drawn comparisons to The Strokes and Daft Punk, with Rolling Stone Australia praising the band’s “amalgamation of emotion and unashamed catchiness.”

Recorded primarily in Sydney with producers Adrian Breakspear (Gang of Youths) and Jean-Paul Fung (Jet, Silverchair) and mixed by Joe LaPorta (The Weeknd, The Killers, Foo Fighters), Castlecomer is equal parts rock and roll abandon and meticulous pop craftsmanship. Chock full of contagious, arena-ready anthems, the album conjures up its own escapist world of young love and big dreams, all fueled by explosive guitars and hypnotizing grooves. Lead single “All Of The Noise” shimmers as it barrels forward, mixing thoughtful beauty with raw power, while “Move” pairs lead vocalist Bede Kennedy’s silky smooth vocals with a disco-tinged arrangement that’s pure 1970’s joy. Castlecomer also offers the band a chance to show off the versatility that marks their exhilarating live shows, where punk snarl (“She Knows”) and stripped-back tenderness (“Leaving”) meet undeniable dancefloor jams (“Make Love Make Music,” “If I Could Be Like You”). No Castlecomer concert would be complete without a tear through “Fire Alarm,” though. It was the first song frontman Bede Kennedy wrote for the album and the one that changed his life.

“When I wrote ‘Fire Alarm,’ I decided then and there to quit my day job and focus solely on music,” says Bede (pronounced BEE d). “That song marked this cathartic moment where I really put a stake in the ground and committed to going all in. For the next twelve months, I did nothing but write for nine hours a day, every single day.”

The band would go on to perform hundreds of shows and festival dates Down Under, building up a devoted fanbase and honing their set into a concentrated blast of pure energy and ecstasy. By the time they got to SXSW in 2017, Castlecomer was ready to take America by storm, and over the course of eight shows in three days, they laid the groundwork that landed them management, a booking agent, a publishing deal, and a record contract.

“We didn’t know anybody in the industry,” says Bede, “but we felt confident that if we had the opportunity to get onstage in front of a lot of people, that would be enough. We’re like the poster boys for what you can achieve at South By Southwest.”

Castlecomer has never been lacking when it comes to drive and ambition, and their tenacious belief in the potential of their band goes all the way back to its earliest days. Comprised of four cousins and a close childhood friend, the group began playing live during their teenage years and took their moniker from a plaque mounted outside their grandfather’s house, one they later found out referenced the Irish village his family had emigrated from. Much like the band’s music, their name possesses deep personal meaning while still retaining an air of evocative mystery, hinting at places they’ve never been but still somehow course through their veins. Australia’s in their blood, too, and Sydney will always be home, but after signing with Concord, the band took a leap of faith in early 2018 and moved to the United States.

With a nice little chill in the air on Saturday evening along the blank of the Mississippi River near downtown Minneapolis, Andy Cook warmed up the very cozy and quaint Aster Cafe with a great […]

Yelawolf Redeems Himself At The Skyway

Things did not go as planned the last time Yelawolf was in town. After just a song, he stormed off the stage and never came back. So why did I try it again last night? […]

We had the opportunity to catch up with Ryan Olcott aka c.Kostra via phone this past weekend. c.Kostra’s new album “now i feel it”  is the latest release from Twin Cities based Pytch Records and […]