Be at the 7th Street Entry on Saturday May 25th for Nick Costa’s Devastator album release show.  You may know Nick as the guitarist in the popular Minneapolis band 4onthefloor or maybe for his solo performances around town.  In whatever shape or form you’ve heard him, I’m sure you came away impressed.  Nick’s friends in Taj Raj will open the show with a special reunion set you don’t want to miss. It’s always a treat to be part of an album release celebration so don’t miss out.  Doors are at 8pm and music starts at 9pm for this 18+ show.  Tickets are only $10 in advance HERE.

For over a decade Nick Costa has been a highly active musician from Minnesota’s Twin Cities, and he is showing no signs of slowing down. His music has been compared to the songwriting and guitar virtuosity of Jason Isbell and the quick-witted lyrics and clever chord progressions of Father John Misty. While others would describe his songs as smart, delicate, folk songs that border on Alt-Country, he would simply consider his own songs as “sad.”

Through the years, Costa has written 5 full length records and 3 EPs between his previous band The Person & The People and his old solo project under the moniker of Me As A Pilot. Now he is releasing his debut solo album, Devastator.

Costa is also currently a full time member of the Minneapolis rock and roll powerhouse The 4onthefloor and has contributed his songwriting and performance skills on countless records. Whether playing sold out concerts in the First Avenue main room or intimate underground shows, Nick always knows how to read the room. 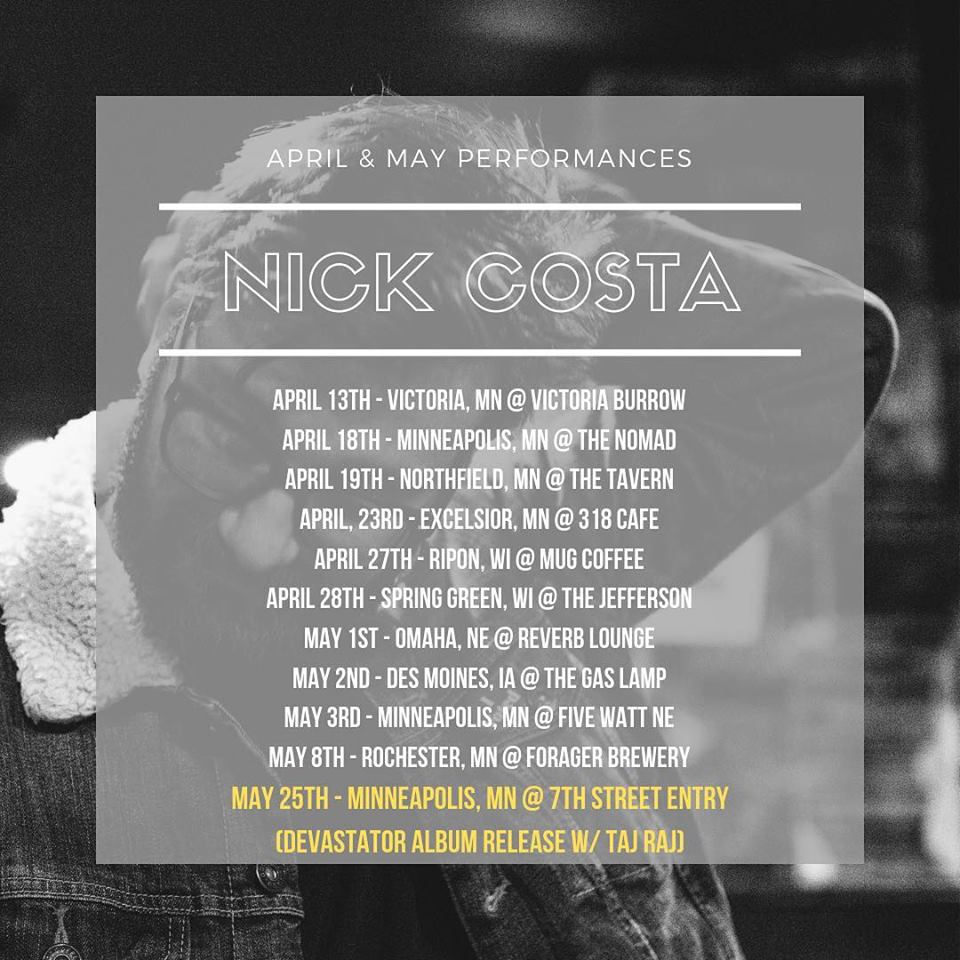 Taj Raj’s elemental and atmospheric brand of indie-folk transports the listener to a world of its own making. Ethereal guitar melodies, earthy acoustic fingerpicking, breezy vocal harmonies, classical piano, and a driving rhythm section support stories inspired by English and German folklore. After two EPs and five years, the five members of Taj Raj have combined their distinctly unique musical backgrounds, including classical, folk, hardcore, punk, and shoegaze, settling into a sonic universe where aggression, grandeur, and sorrow can co-exist in a moment, ricocheting against one another amidst layers of reverberating melodies. Reflections on love, longing, and jealously are folded into layers of myth and set against musical textures that shimmer, like the Northern Lights, in and out of prominence. Taj Raj’s Night Speech is emotionally loaded–but it’s more than a journal entry. The band builds its own distinct world and fills it with characters whose voices can be heard by any listener with the spirit for a journey.

I’m not entirely sure if she was kidding, but Nicole Atkins might be bailing some of her band out of jail this week…  Halfway through her opening set, Atkins made a comment about her drummer […]

School For Girls warmed the stage for Adam Levy on Saturday night at the Cedar Cultural Center. The band is made up of veteran musicians and theatre performers based in Minneapolis.  Brought together by a love […]