Prepare yourself to engage in an experience of a lifetime! The fifth annual Summer Set Music & Camping Festival is ready to take control of Somerset Amphitheater on August 12 – 14. This year’s featured musical artisit include dubstep god Skrillex, Chicago rapper Chance the Rapper with the Social Experiment, and tubthumping EDM maestro Bassnectar. 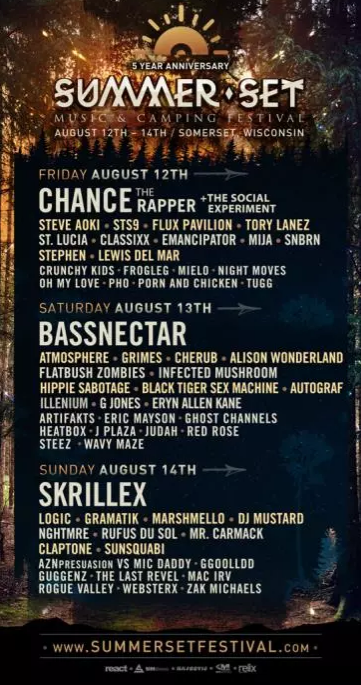 Other than Bassnectar, who’s performed at the ever-growing EDM carnival three years running, the main acts this year are all new to the Summer Set stage. It’ll be a rare chance to see Chance the Rapper collab live with the Social Experiment, as well as the first time any eight-time Grammy winner has appeared. Other ’16 Summer Set notables include party-starting Maryland-based rapper Logic, future-bass producer Marshmello, and the electro-instrumental rockers STS9.

I’m a crazy cat lady. There, I said it. You happy? I grew up loving dogs but somehow ended up with two cats (I blame city apartment living) and I couldn’t be happier. It’s kind […]

If you are looking for a good time on Saturday night November 2nd, you’ll find it at St. Paul’s Amsterdam Bar. Boston’s Ripe will be there giving you everything you need to ignite a dance […]

Fall of 2018 has become something of a southern rock nostalgia trip for me. Seeing the new school and old school southern rock bands lately has been nothing short of spectacular. I saw the Canadian […]